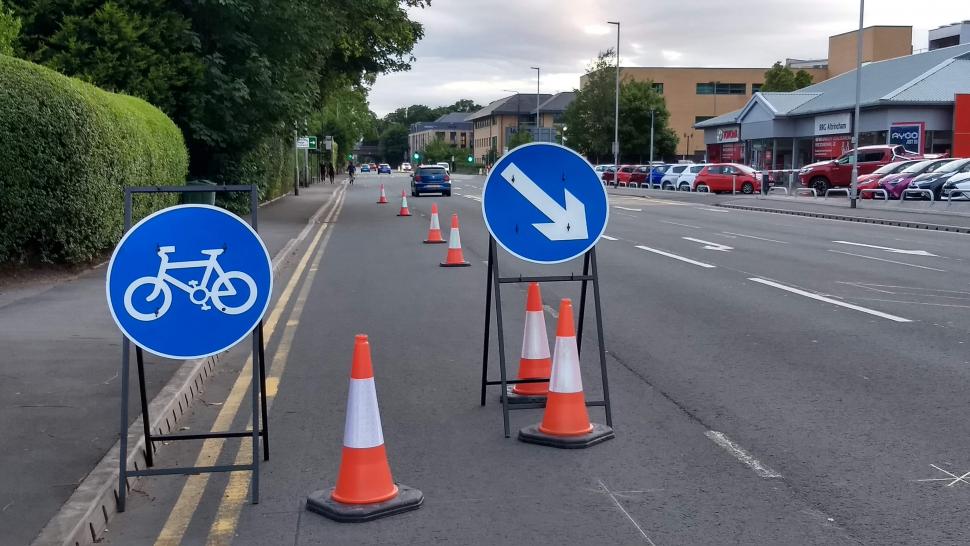 Temporary infrastructure had only been installed at the weekend
by Simon_MacMichael

Trafford Council has removed a pop-up cycle lane installed on the A56 at the weekend following complaints from drivers about congestion.

The Labour-run council had put the temporary infrastructure in place as part of a seven-mile cycle route from Altrincham into Manchester city centre.

Pleased to report that the "Bee 56" now reaches #Timperley! A big welcome to those who venture south. A safe travel option for students @TraffordCollege. Looking forward to it reaching #Broadheath and #Altrincham. Photos taken 9pm last night to a soundtrack of birdsong. pic.twitter.com/poF2IMqG4Y

However, Altrincham Today reports that a section of the route, which had been hailed by the council as a “bold step” was removed this morning.

The route out of the city centre now finishes in Sale instead of continuing to Altrincham, with the cycle lane removed from the A56 as it approaches the Park Road junction in West Timperley.

Yesterday, a number of motorists took to social media to complain about traffic congestion that they said were caused by the cycle lane.

Conservative councillors in Trafford – four in five of whom represent wards that are in the Altrincham & Sale West parliamentary constituency – had also called for the lane to be removed.

Councillor Nathan Evans of the Timperley Ward, said: “We certainly need safe cycle routes but at a time when we need maximum opportunity for access to work and limited use of public transport, simply halving the main route into Manchester, without proper consideration or any consultation with local residents, is the wrong decision.”

The emergency infrastructure had been put in place using money from Greater Manchester Mayor’s Cycling and Walking Challenge Fund.

It followed calls from the government for local authorities to put emergency infrastructure in place to protect cyclists and walkers and enable social distancing.

Such infrastructure, the government said, would not only ease pressure on public transport as lockdown eases, but also encourage people to leave their cars at home and thereby avoid the very gridlock that motorists in Trafford complained about.

Earlier this month, we reported how South Gloucestershire Council had removed a temporary cycle lane in Filton after just five days following similar complaints from drivers.

Duncan Dollimore, head of campaigns at Cycling UK, said: “Public transport is  operating at limited capacity and motor traffic levels are increasing again, so councils have to act quickly to make space for people walking and cycling.

“It’s therefore inevitable that after doing so, some will decide to review or amend certain schemes, hopefully improving them in the process.

“But it’s crucial that cycle lanes aren’t removed within hours just because of concerns that journey times for some people in cars might have temporarily increased.

“The A56 between Altrincham and Manchester city centre is a road that could potentially become a key active travel corridor, but only if cyclists have protected space.

“Yes, by all means tweak the temporary scheme if needed, but it’s simply unrealistic to expect engrained travel habits to change overnight, and for there to be no teething problems.

“Cycling UK would therefore urge the council to think about the wider benefits for everyone, and the people in Trafford who don’t have a car, not just the voices of those unhappy that their particular car journey was delayed,” he added.