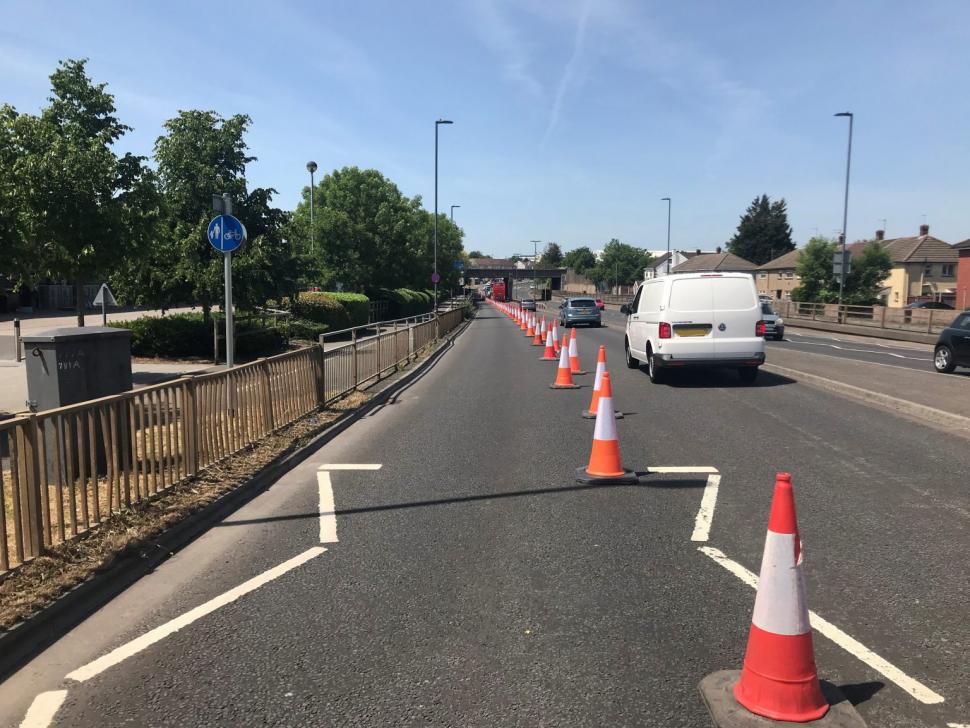 Cycling UK says it is “difficult to fathom the logic” of South Gloucestershire Council's decision...
by Simon_MacMichael

A temporary cycle lane introduced in Filton last week, with the launch accompanied by much fanfare from South Gloucestershire Council, has been removed after just five days following complaints that removal of a lane for drivers to accommodate it had lead to increased motor vehicle congestion – despite the council promising that “a more robust barrier” would be installed at the location, which lies around 5 miles from Bristol city centre, this week. The charity Cycling UK says it is “difficult to fathom the logic” of the pop-up infrastructure being removed so soon after its introduction.

The lane, on the A4174 between Abbey Wood Roundabout and Emma Chris Way, was installed on Thursday 28 May and billed as “The first of a number of new measures planned in communities across South Gloucestershire to help pedestrians and cyclists move around whilst social distancing.”

At the time, the council said: “Transport habits have changed in light of the coronavirus pandemic and as lockdown restrictions are eased over the coming weeks, we want to make it as easy as possible for people to safely walk, cycle or access schools.

“We are looking at measures we can introduce to support more walking and cycling in and around our town centres and local communities and we also want to help kick start the economy by enabling easy and safe access to shops and businesses.”

Regarding the temporary cycle lane in Filton, the council said: “For this first scheme, part of the existing road space has been cordoned off to form a wider shared pedestrian and cycling lane, at a notorious pinch point.

“The pavement narrows under the railway bridge and without these new measures it would make social distancing very difficult if people were to pass each other there.”

The temporary lane was installed in response to the government calling on councils to urgently create more space for cyclists and pedestrians as lockdown redstrictions are eaesed and people return to work.

The council added: “The wider lane has initially been installed using temporary traffic management and a robust barrier will be added next week.”

It was funded by central government through the West of England Combined Authority, didn’t even last that long.

In a Facebook post today, South Gloucestershire Council StreetCare said: “Following feedback from residents, businesses and road users, we are today removing the temporary measures put in place on the A4174 Station Road in Filton.

“We have listened to comments about the trial measures, which were implemented to allow more space for cyclists and pedestrians as lockdown restrictions are eased and people start to return to work. We understand the concern around increased congestion and are removing the cordoned off road space between the Abbey Wood roundabout and Emma Chris Way to a normal traffic lane.

“Signs warning cyclists and pedestrians to take extra care along this section of the A4174 so they can remain two metres apart will be put up as soon as possible.”

It added: “We are continuing to look at ways we can help people to safely walk, cycle or access school and welcome suggestions for your local area.”

“I understand motorists were concerned that the queues were creating pollution.

“If they were at all concerned about the pollution that their vehicles caused they should stop using them.”

Duncan Dollimore, head of campaigns at Cycling UK, said: “The idea with temporary infrastructure is that if the design and location aren’t perfect, then of course the local authority can re-think matters and hopefully improve it after seeing how things work on the ground.

“It’s difficult however to fathom the logic behind the installation of a pop up cycle lane only to remove it a few days later.”

He added: “Cycling UK wrote to every Council Leader six weeks ago urging them to install measures to enable more people to cycle and walk safely whilst maintaining social distancing. We’ve not heard back from South Gloucestershire yet, so whilst chasing, we’ll ask them about the five day lane.”