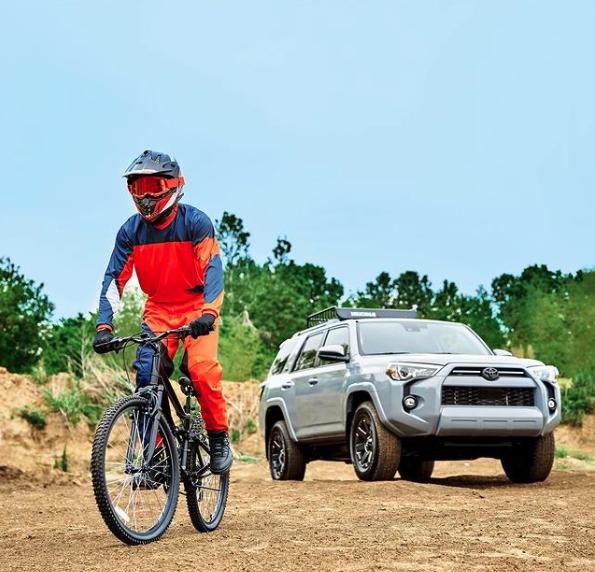 "Is there a potato running your marketing department now?"...
by Will Bolton

Toyota USA has come under fire after it released an image of a £27,000 off road vehicle alongside a rather disappointing looking 'mountain bike' with the caption 'Our Ideal Adventure'.

The advert showed a Toyota 4Runner next to a mountain biker on an extremely cheap looking bike, which people suggested might have been picked up from Walmart for around $100 (£70).

People were quick to point out that for most mountain bikers an ideal adventure would feature a significantly more expensive bicycle, perhaps at the expense of a slightly cheaper vehicle...

Social media users offered some alternative captions for the image while suggesting the advertising team behind the picture could have used a slightly more 'robust' bicycle...

One man, Danny Tarr, commented: "When you spend all your money on a 4Runner so you can only afford a $100 bike."

Another, Ryan Rodriguez said: "An adventure would be riding that bike anywhere but a sidewalk... The Toyota may last 300,000 miles, that bike will last 3."

People also commented on the fact that even the cyclist's kit appeared to cost more than the fragile looking bike - which seems to be ever so slightly too small for the rider.

Another added: "Looks like the global bike shortage strikes again."

Meanwhile, others took aim at the social media team behind the image, with Will Stewart asking: "Is there a potato that is running your marketing department now?"

Toyota is not the only car manufacturer to have missed the mark recently when it comes to its social media posts.

Mercedes came under heavy criticism for this since deleted post which showed the dazzling array of screens inside its new S-Class range...