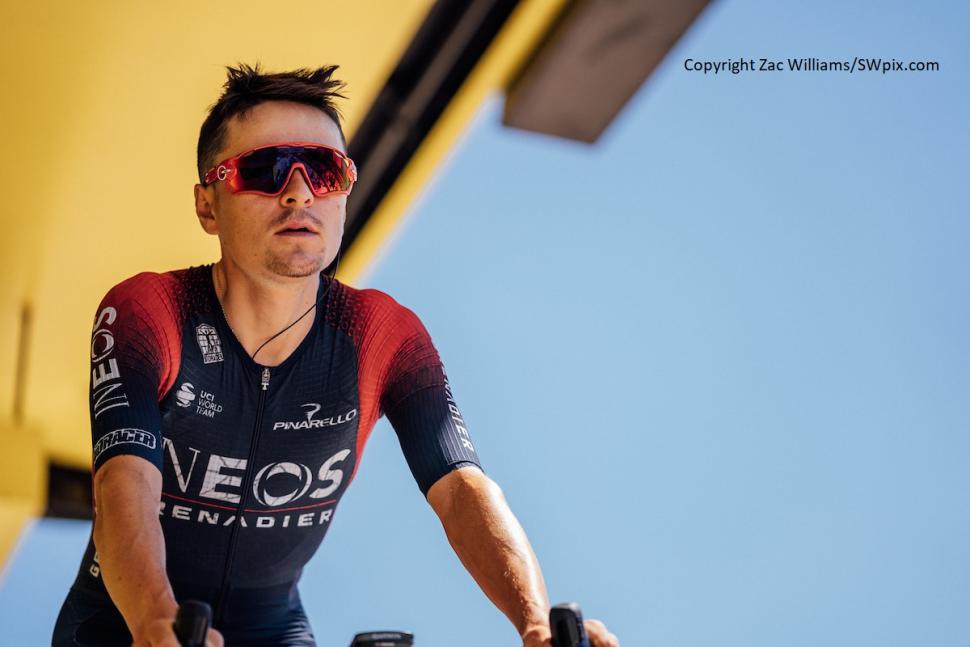 Tom Pidcock of Ineos Grenadiers attacked from the break on the Alpe d’Huez this afternoon to win Stage 12 of the Tour de France on what is one of – perhaps the – most fabled climbs in cycling.

Less than a year after winning gold in the mountain bike cross-country event at the Tokyo Olympics, and six months on from taking the rainbow jersey in the UCI Cyclo-Cros World Championship, it’s the biggest win to date of the Yorkshire rider’s career on the road.

Today, they were in the break together as Froome, now with returning to the Tour for the first time since his near-career ending crash at the Criterium du Dauphiné in 2019, put in what is his strongest ride since his comeback.

It was the younger man who prevailed though, attacking his breakaway companions with 10.5km remaining and again 3km later and riding away to an emphatic solo win that will see his name join those of some of the greatest riders in the history of the sport on the Alpe d’Huez’s 21 hairpins.

Jonas Vingegaard of Team Jumbo Visma retains the overall lead he took in sensational fashion on the Col du Granon yesterday – but on what turned out to be a terrific day for Ineos Grenadiers, 2018 Tour winner Geraint Thomas moves into a podium place after Team DSM’s Romain Bardet, second this morning, lost time.

Thomas is now third overall, 2 minutes 22 seconds behind the Vingegaard, and 4 seconds down on defending champion Tadej Pogačar of UAE Team Emirates – the trio all crossing the line together, 3 minutes 23 seconds behind Pidcock – with Bardet 9 seconds further back on the Welshman in 4th place.

Ineos Grenadiers now have three riders in the top 10 of the General Classification – besides Thomas and Pidcock, who has moved up to 8th overall, Adam Yates is in 5th place, 3 minutes 44 seconds off the race lead.

Pidcock’s performance today belied his age and included a thrilling descent from the Col du Galibier.

His final attack saw him distance the last of the breakaway companions challenging him for the stage win, Louis Meintjes of Intermarché  Wanty Gobert, and the South African would finish second, 48 seconds down on the Ineos Grenadier rider.

Froome was a further 18 seconds back in third place – his first top 10 finish in any race since that horrific crash three years ago, and the first time he has finished inside the top 30 of a WorldTour race since then.

“A stage win in my first Tour, it’s not bad,” said Pidcock afterwards with the kind of understatement that, if you did not already know he was from Yorkshire, would provide a decent clue to his birthplace.

“I guess it’s made my Tour de France so far, even if nothing else happens and I get dropped every day,” he continued.

“The idea was to get in the break. I lost enough time yesterday that hopefully I’d be given freedom.

“If I’d gone up the Galibier maybe I wouldn’t have got away, but on the descent maybe Jumbo don’t want to risk chasing me. Also the gap was small enough to go across so it worked out perfectly in the end.

“That was certainly one of my best experiences in cycling. That was unreal. When you’re literally slaloming through people’s flags, fists and god knows what else – you cannot experience that anywhere else, in anything, other than Alpe d’Huez in the Tour de France.”