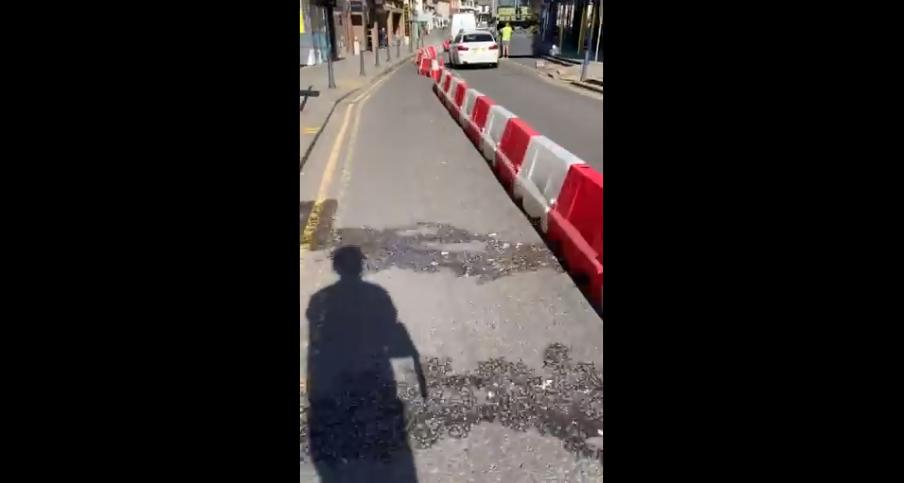 A pop-up cycle lane in Reigate that was installed at the weekend will be removed this evening following pressure from the Surrey town’s Tory MP. The lane, on Bell Street, Church Street and High Street, had been introduced to provide safe space for cyclists.

But writing on his blog on Saturday after the temporary infrastructure had been but in place on Friday night, Crispin Blunt, Member of Parliament for Reigate, said he was “appalled at the predicted traffic chaos,” describing it as a “nonsensical cycle scheme.”

Yesterday, Councillor Tim Oliver, leader of Surrey County Council, visited Reigate to meet Blunt and see the scheme for himself.

Blunt said that he later received a message from the councillor “to say that it was his view that the cycle lane scheme, imposed at short notice on Reigate High Street as part of a quick impact fund from DfT for sustainable transport options and part of Covid-19 emergency expenditure, is not achieving what it sets out to do for cyclists or is essential for social distancing for shoppers.”

In a tweet this afternoon, the council confirmed that the temporary cycle lane will be removed tonight.

The temporary cycle lane will be removed from Reigate Town centre at 9pm tonight.
The scheme will be continually monitored. #activetravel #Reigate pic.twitter.com/90hrMHkV8K

However, a video from this morning shared by the All Party Parliamentary Group on Cycling and Walking (APPGCW), showed little motor traffic on the road, with the poster saying it was “disappointing that Surrey County Council are not letting a proper trial take place.”

The video below shows the pop-up cycle lane in Reigate this morning at 8am.

It was installed on Saturday and it will be removed tonight, mainly due to pressure from the local MP @CrispinBlunt.

On Saturday, Councillor Mark Furniss, Surrey County Council’s cabinet member for highways, tweeted that the trial of the cycle lane would “remain in place for a minimum of three weeks” and that the council could “start to make changes after the first week.”

This trial will remain in for a minimum of 3 weeks. We can start to make changes after the first week once we see how commuter and recreational traffic works with the trial. https://t.co/girgOlMc6b

As it turns out, the lane has lasted just three days – a similar situation to what has happened to temporary cycle lanes in Filton, South Gloucestershire, and Trafford, Greater Manchester, that were quickly removed after motorists complained.

Blunt insisted in an update to his blog today that he believes most of the temporary active travel schemes being implemented in Surrey are “welcome and delivering benefits for sustainable transport.”

However, last week it was confirmed that Surrey County Council had only received half of the indicative £1.696 million first tranche emergency active travel funding from the Department for Transport (DfT).

Councils that failed to receive their full allocation missed out because their plans were deemed by the DfT to not meet the standards it had stipulated when it invited local authorities to submit their proposals for what they would use the money for.

Announcing the county’s temporary infrastructure plans last week, Councillor Furniss confirmed that it would provide £848,000 in funding to make up the shortfall, and said: “These schemes are important to give people the confidence to travel back to our town centres, and to support the people who rediscovered walking and cycling during the lockdown.

“I hope the new cycle lane in Reigate town centre will encourage more people to use their bikes to get around the town.

“Transportation is responsible for 46 per cent of Surrey’s carbon emissions, so it’s essential we find innovative ways to help people find cleaner ways to travel.

“And for individuals, walking and cycling are good for physical and mental health,” he added.