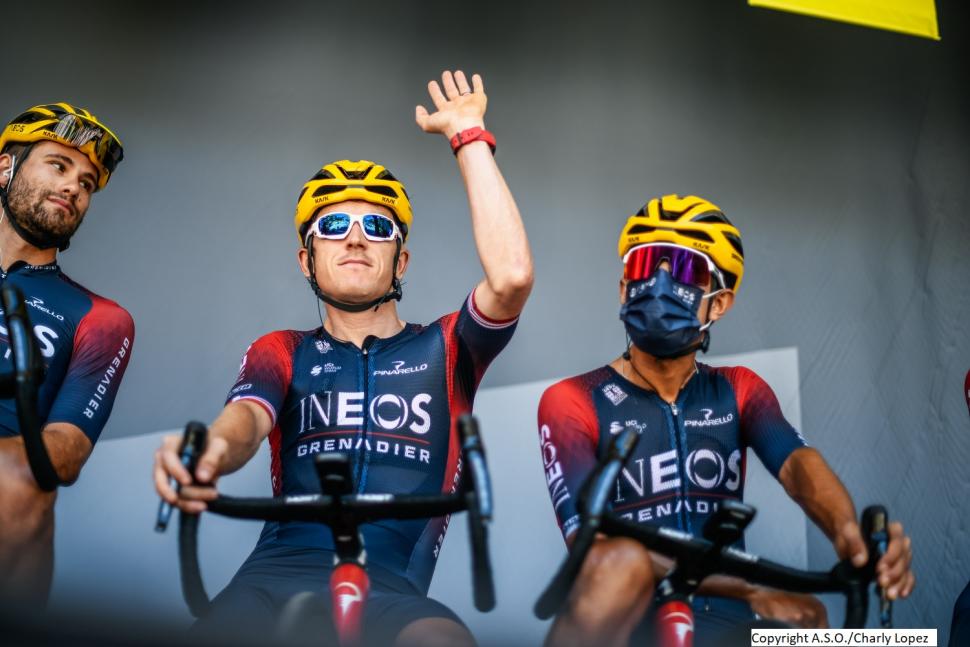 Geraint Thomas insists that Ineos Grenadiers “are still in a good place” as the Tour de France heads into the Pyrenees for its closing week.

The 36 year old, winner of the yellow jersey who is currently third overall, 2 minutes 43 seconds behind overall leader Jonas Vingegaard of Team Jumbo Visma, also said on today’s rest day in Carcassonne that “it can all change” in the coming stages.

“They're going to be tough days for sure,” said Thomas, quoted on BBC Sport. “I think Pogačar looks intent on attacking any moment. We are going to try and look at it as a three-day block, as everyone probably will.”

Tomorrow’s Stage 16 covers 178.5km from Carcassonne to Foix and includes three Category 1 climbs – the last two coming fairly late on, followed by a long descent to the finish.

On Wednesday, Stage 17 sees the riders tackle a 130km route from Saint Gaudens to a summit finish at Peyragudes, and the following day’s 143.5km stage from Lourdes includes two Hors-Categorie climbs – the Col d’Aubisque, and the Hautacam for the finish.

“The hardest will probably be the last of those three days, and no matter how it looks after the second day on Wednesday I think it can all change on the last day in the Pyrenees, because that's a super-hard day,” Thomas explained.

“It’s certainly going to be difficult, there are two incredibly strong riders in front of me, not just one. But you’ve got to keep believing.

“As a team we're certainly going to try and make the most of anything we can and keep racing the best we can. We’re just trying to get to Paris as quick as we can, and that's all we can do.”

The Welshman believes that the two riders at the top of the overall standings could put on a show in the Pyrenees as Pogacar tries to close the gap on Vingegaard.

“As we saw yesterday, Vingegaard had a little crash and Covid is still rife, so all that comes into play,” he said.

Looking ahead to Tuesday and Wednesday’s stages in the high mountains, he said: “I just think they’re going to be attacking the hell out of each other at will.

“Jonas might try and give a psychological blow at the end and try and gap Pogacar, but it's only going to be exciting to watch for everyone at home – maybe not for those trying to follow them.”

Speaking of his own form, Thomas said: “Without sounding too cocky, when I won [in 2018] I never went ‘full’, I was suffering and it was hard, but I never felt like I had to ride ‘full gas’ for 5k, whereas I have here.

“The numbers are good here, some of the best numbers I’;ve done, so I'd definitely say it’s a similar level more or less.”

Besides Thomas in third place overall, Ineos Grenadiers go into the final week leading the teams classification and with two other riders in the top 10 overall – Adam Yates who sits fifth, and Tom Pidcock who lies ninth after that memorable win at Alpe d’Huez last week.

Here is our preview of the next three days in the Pyrenees. 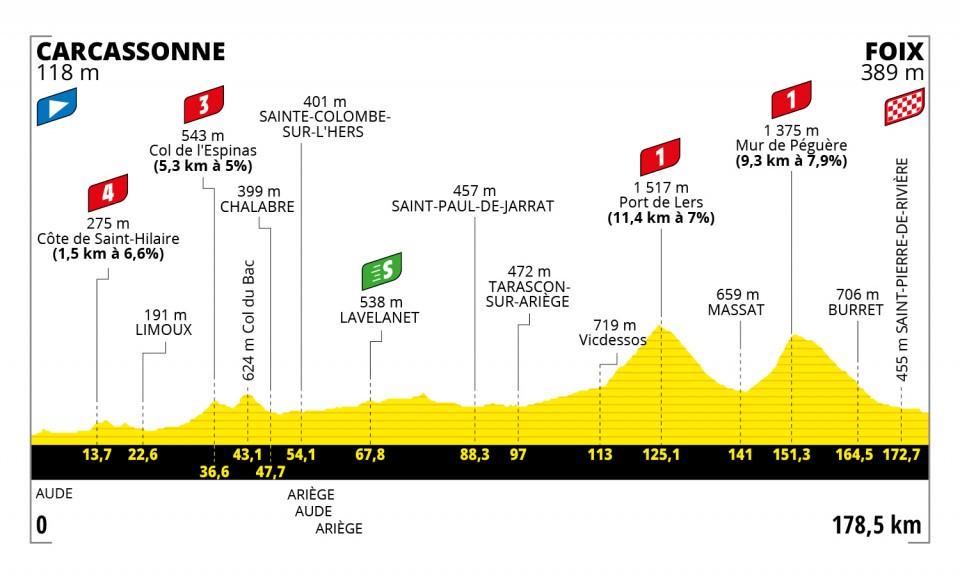 The race heads into the Pyrenees with a stage that should see a big fight to get into what should be a typically large final-week break. It will most likely include some riders who may have harboured overall ambitions when the race began in Denmark, but who are now out of contention on the general classification and will be targeting stage wins to try and salvage something from the Tour.

Two Category 1 climbs feature on the second half of the stage – the Port de Lers, covering 11.4km at 7 per cent, and the Mur de Péguère, which averages 7.9 per cent over its 9.3km. The summit comes with 27.2km remaining to the finish and given the two days that lie ahead, the overall contenders may well keep their powder dry, meaning today’s winner is likely to come from the break. The first of two consecutive summit finishes features five climbs, three of them Category 1 – the Col d’Aspin, the Col de Val Louron-Azet, and finally the ascent to the aerodrome at Peyragudes and its brutal upper slopes. The climb is making only its third appearance in the race, both previous visits proving to be memorable.

The first finish here was in 2012, when Alejandro Valverde won the stage from Chris Froome and overall leader Bradley Wiggins. Five years later, Romain Bardet took the stage, while Fabio Aru grabbed the yellow jersey from Froome – although the Team Sky rider would take it back two days later and keep it all the way to Paris. 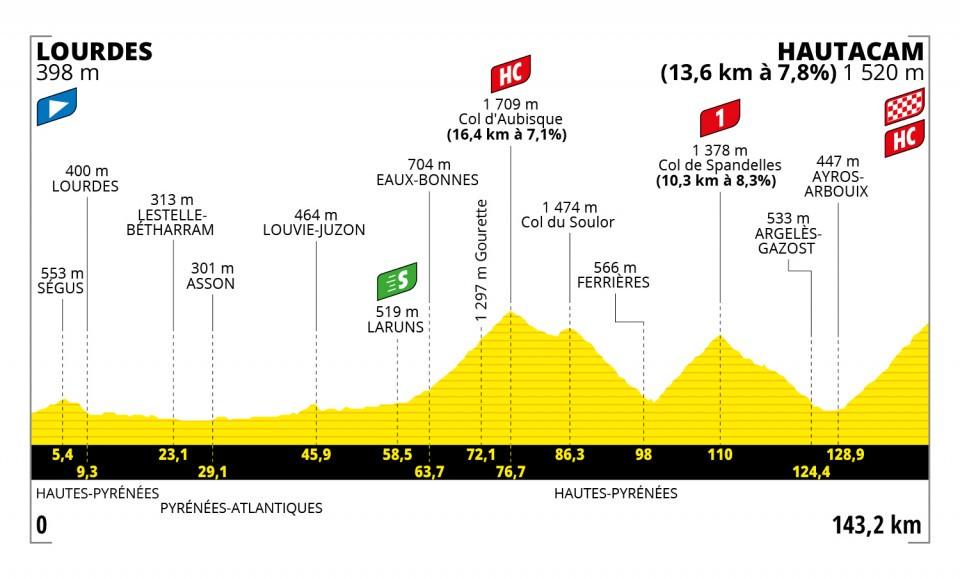 The final mountain stage of this year’s Tour, and it’s an absolute beast, with two Hors-Catégorie climbs – the Col d’Aubisque and the finish – plus a new climb, the Col de Spandelles. The latter gives a new approach to the final ascent to Hautacam, making just its sixth appearance in the race since its debut in 1994.

On four of those occasions, it was the eventual overall winner – Miguel Indurain, Bjarne Riis, Lance Armstrong and Vincenzo Nibali – who triumphed on the Hautacam, the exception being Cadel Evans, who won here in 2008, three years before winning the yellow jersey. It will be the final mountain of this year’s race – but with the individual time trial still to come, will it be decisive?