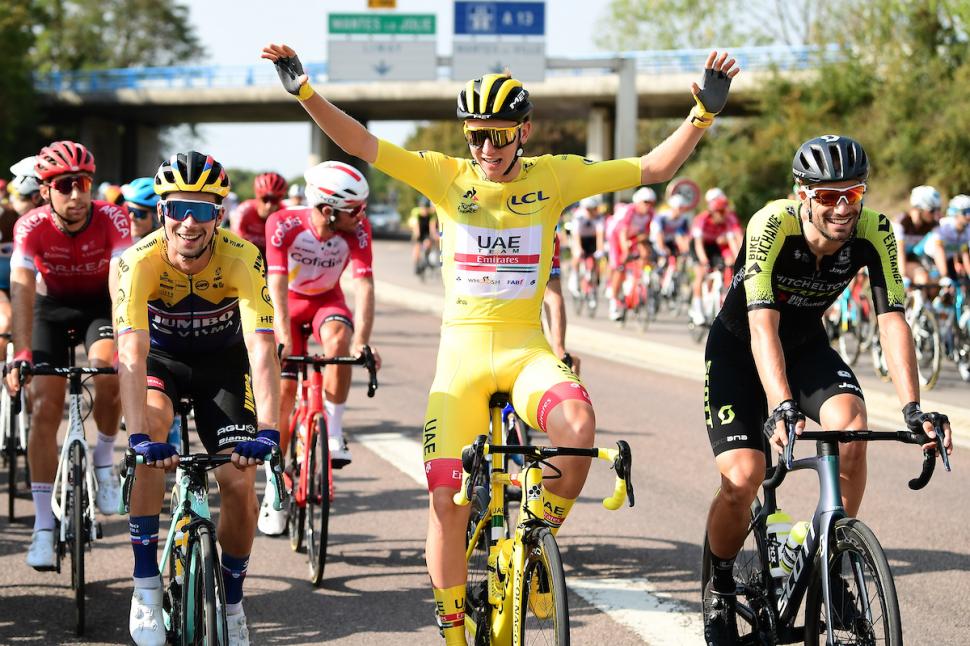 The 107th edition of the Tour de France has finished in Paris this evening, with Tadej Pogacar of UAE Team Emirates sealing an overall victory that just yesterday morning seemed an impossible prospect, and Deceuninck-Quick Step’s Sam Bennett becoming the second Irish rider to win the green jersey, capping his triumph in the points classification by winning the sprint on the Champs-Elysees.

Three weeks ago when this most unusual edition of the race started in Nice, it seemed impossible that it might reach Paris, with coronavirus cases starting to rise again.

This evening, however, two months later than originally planned, the 146 riders left in the race rode the traditional nine laps of the Champs-Elysees circuit in the Parisian sunshine to complete the 122km stage from Mantes-la-Jolie.

It’s a scene that is familiar to all cycling fans from years gone by, but rendered eerie by the near-total absence of cheering crowds, particularly noticeable at Norwegian Corner opposite the Joan of Arc statue on the Rue de Rivoli and around the Arc de Triomphe.

Pogacar’s win, which comes on the eve of his 22nd birthday, is historic for a number of reasons.

He’s the first rider to win the yellow, polka dot and white jersey in a single edition, and the first debutant to have won the overall since Laurent Fignon in 1983.

He is also the youngest winner since Henri Cornet, aged 19, was belatedly given the victory in the second edition of the race in 1904, four months after it finished after the first four riders on the general classification were all disqualified.

After the four-man break had gone through the intermediate sprint on the Champs-Elysees, Bennett led the peloton over, and with seven-time green jersey winner Peter Sagan of Bora-Hansgrohe deciding not to contest it, the Irishman extended his lead to 70 points to assure himself of victory in the points classification.

The Deceuninck-Quick Step rider wasn't finished, though, timing his final sprint to perfection to win his second stage of the race, with Mads Pedersen of Trek-Segafredo, in his final race as world champion, finishing second, ahead of Sagan, who was third.

He follows four-time points classification winner Sean Kelly as the second Irish winner of the green jersey at the Tour de France, both riders hailing from the town of Carrick-on-Suir in County Waterford.

The final podium for the general classification, meanwhile, is headed by Pogacar ahead of fellow Slovenian Primoz Roglic of Jumbo-Visma, whom he sensationally overhauled in yesterday's individual time trial on La Planche des Belles Filles, with Richie Porte of Trek-Segafredo third.

It has been a long journey, which began well before we started in Nice and has ended in the most beautiful way.  My season was focused on the Tour de France from the start of the year, the preparation was perfect and well planned by the team with training camps and training plans during the lockdown: I was always focused even in the difficult moments when the racing stopped earlier in the year.

I arrived at the Grande Boucle in good shape, along the way we lost two teammates, but the team managed to maintain a great atmosphere.  It was a pleasure to experience this, with all my teammates and staff members by my side, the challenges that the Tour offered up every day, trying to always remain calm and, at the same time, concentrated. I really still can’t believe what fantastic moments I have lived!

It would have been great to finish second in Paris, but being here in the yellow jersey is the best you can ask for.

Today was a special day, I was able to finally chat calmly with the other riders while we rode.  It was exciting to receive the compliments of so many riders in the bunch.

Cycling is a beautiful sport.

Sam Bennett, winner of the green jersey and the final stage

I feel amazing, I can’t tell you how happy I am! I never thought I would be in this position one day. I grew up watching these Champs-Élysées sprints filmed from every angle and to do it myself now in the green jersey it’s unbelievable!

It’s the best victory of my career. It’s something I will remember and treasure for the rest of my life, especially as I did it in the green jersey, which I never dreamed of winning.

It was really fast and I was a bit nervous, but the boys flawlessly controlled the race and brought me to the front when it mattered.

On the final straight, I let other riders come up, because I felt some headwind, and then I opened my sprint with 150-200 meters to go.

As I came on the other side, I thought someone was going to come pass me, but it didn’t happen and I still can’t believe I won.