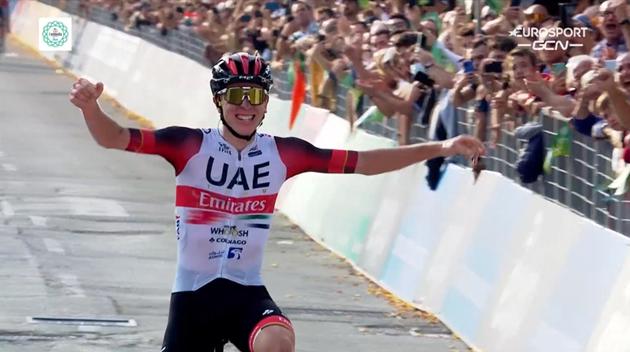 Did the Slovenian’s third career monument victory put some much-needed gloss on a tumultuous 2022 or was it simply a fitting end to an “almost perfect” season?
by Ryan Mallon

Okay, I know what you’re thinking. That it’s downright absurd to suggest that Tadej Pogačar’s win today at Il Lombardia – his second straight triumph at the Race of the Falling Leaves – saved the UAE Team Emirate rider’s season.

Most professional riders, I hear you cry, would bite your hand off for a year – even a career – that features three stage wins and second on GC at the Tour de France, top fives at two other monuments, three one-day victories, including Strade Bianche, and three stage race overall wins.

But the feeling that Pogačar’s brief and blistering time at the very top of the sport was drawing to a close – or to use the modern parlance, that he’s “washed” – was clearly evident within certain sections of the cycling community in recent weeks, such is the level of expectation surrounding the 24-year-old Slovenian, particularly after a 2021 season billed as one of the best ever and headlined by a dominant second Tour win and two monuments.

It seems that in the harsh and hyper world of social media, one reliant on instant and constant gratification, anything less than extraordinary feats an extraordinary amount of the time is greeted almost immediately with raised eyebrows and ominous whisperings of impending mediocrity. Especially when you’re the latest Next Eddy Merckx™.

‘Ah, just second at the Giro dell’Emilia? Behind a flying Enric Mas? The lad’s done…’

Regardless of the shaky foundations on which such mutterings were based, they were swiftly dismantled by Pogačar’s convincing victory in Como this afternoon, where he comfortably beat the in-form Mas in a two-up sprint after leaving the rest trailing in their wake. 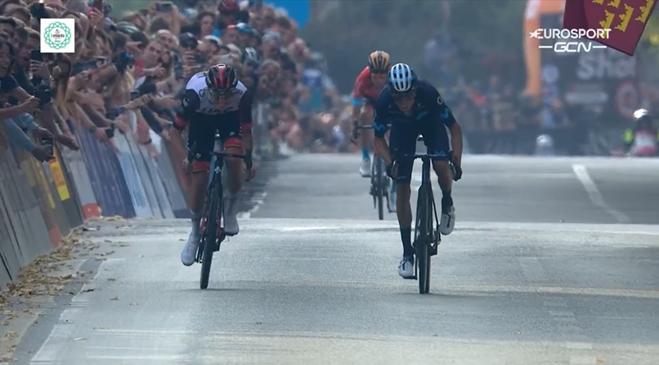 On the same day two of the previous generation’s most sparkling all-rounders, Vincenzo Nibali and Alejandro Valverde, bowed out of the sport (the former with a whimper, the latter with a fairly exhilarating controlled explosion), the UAE Team Emirates rider proved – despite the yellow and black and now rainbow shadows hovering over his season – that he remains the foremost exponent of this most exciting of road racing eras.

He may even have laid some of the ghosts of July firmly to rest. When Pogačar first raised the pace on the Civiglio after a consummate warmup act from his UAE teammates, the Slovenian’s tormentor on the Col du Granon, Jonas Vingegaard (who only roused from his late summer slumber at the CRO Tour last week) vainly tried to bridge the gap, before slumping back into his saddle with a categorical, defeated thump.

From there, despite Mas’s obvious and dangerous strength and a tactically intriguing cameo from a resurgent Mikel Landa, it all seemed so inevitable. And familiar.

If anything, rather than the revealing the cracks in a young empire on the verge of collapse, Pogačar’s 2022 season has instead underlined the potential scale and complexity of his two-wheel fiefdom. 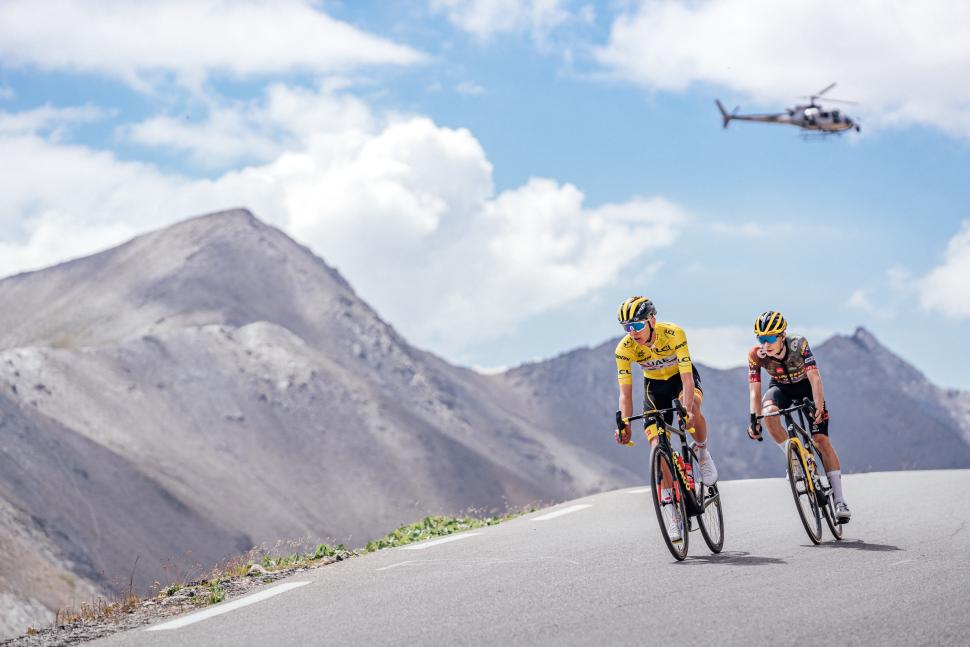 Pogačar and Vingegaard descend the Galibier on the way to their Tour-defining showdown on the Col du Granon (Zac Williams/SWpix.com)

He may have been defeated at the Tour de France but – once we divert our gaze from the all-consuming glow of the Grande Boucle – everywhere else, the Slovenian offered an even more compelling case for his staggering ability to compete for the win at almost any bike race on the planet.

This proved especially the case in the spring classics, where the UAE Team Emirates rider often appeared on the brink of world domination. After winning on the white roads of Strade Bianche, in the weeks that followed at Milan-Sanremo and the Tour of Flanders – hardly the domain of the grand tour mountain goat – the then-23-year-old bent both monument races to his will, and appeared to be largely undone only by his own extremely obvious strength, along with some youthful overexuberance and tactical naivety. 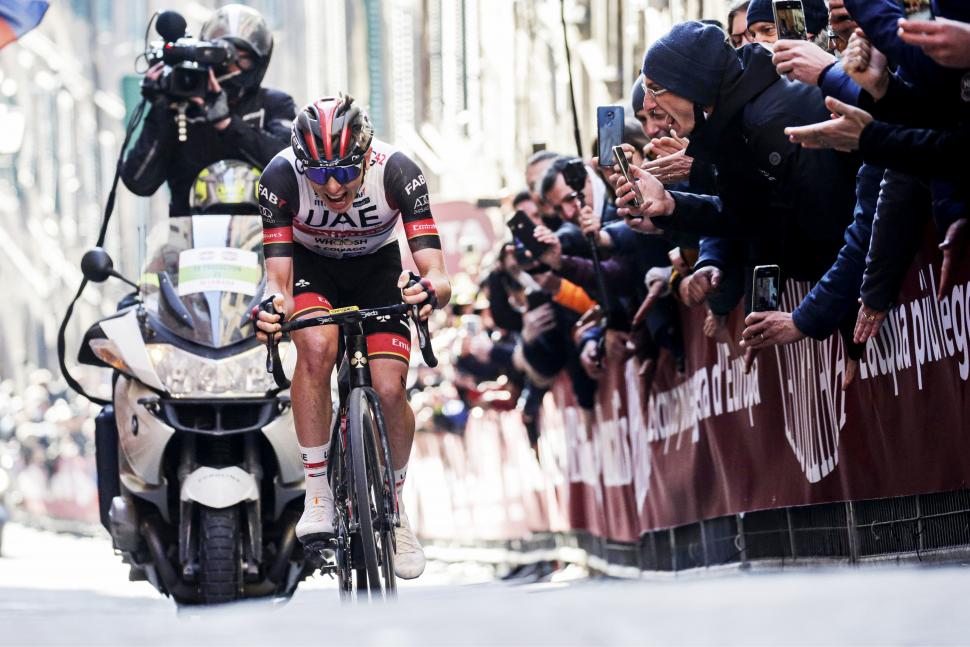 Pogačar on his way to winning the 2022 edition of Strade Bianche (Anton Vos/CorVos/SWpix.com)

The Slovenian was then unfortunately unable to defend his title at Liège-Bastogne-Liège, where he surely would have been the only rider capable of smothering Remco Evenepoel’s long-range pyrotechnics, following the tragic death of his partner’s mother from cancer. Next spring’s rematch with the Belgian – the newly crowned boy king of cycling this autumn – will already be marked in most cycling fan’s calendars.

2022 has also made increasingly clear that the biggest challenge to Pogačar’s pre-eminence – at both the grand tours and the classics – won’t just come from the man (and team) who bested him in July, and who he callously dispatched on the Civiglio today, but also from the precocious world champion who swapped a day in Lombardy in the rainbow jersey for a wedding suit in Flanders.

While for some, Tadej Pogačar’s season will be defined by his collapse on the Col du Granon, 2022 may well simply mark yet another stage in the evolution of a talented, attacking generation of all-rounders willing and able to fight on all fronts and over all terrain, from February to October. And the sport, still so fixated on July and the Tour, will be all the better for it.

In any case, what did the man himself make of his season as it draws to a close in triumphant fashion?

“I would say almost perfect,” a smiling Pogačar told reporters on the shores of Lake Como this afternoon.

2023 will certainly be interesting.