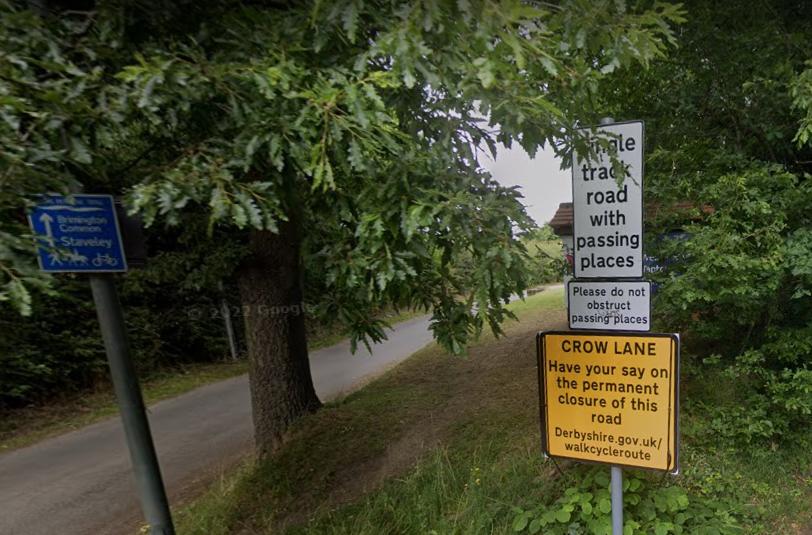 Despite plans being described as "controversial" by the local press the public consultation saw residents approve new cycle routes and an extended 30mph speed limit...
by Dan Alexander

Plans to permanently close a road described as "vitally important for local people" so it can be turned into a walking and cycling route have been approved by residents following a public consultation.

Crow Lane in Chesterfield, a single track road with passing places, will be closed permanently to make way for a dedicated active travel route to Chesterfield Royal Hospital avoiding the busy A632.

The Derby Telegraph reports residents also gave the green light to a cycle lane to be built on Chatsworth Road (A6190) and to extend the 30mph speed limit on the A-road.

Despite objections from some members of the Chesterfield Civic Society who said Crow Lane is a "vitally important route for local people" the public consultation saw 752 people expressing support versus 416 objections.

Work on sections of the Crow Lane cycle route will begin this autumn and the road will be permanently closed to motor traffic in the new year. Once completed Chesterfield will have a cycling route from the A619 junction with Holymoor Road on Chatsworth Road into town past the train station and up the hill to the hospital via Crow Lane. "We have listened carefully to what people told us in the consultation and looked at all the alternatives given," Councillor Kewal Singh Athwal said. "Creating this route across Chesterfield will give many more people the opportunity to get out of their cars, and either walk or cycle to get into town, or up to the hospital.

"We know that many hospital staff walked or cycled on Crow Lane at the height of the pandemic, and we would expect numbers to increase when the lane closes to vehicles again for good."

Derbyshire County Council was awarded £1.68 million to create the new route, including the Chatsworth Road section, and defended its "appropriate" three-week consultation which saw information leaflets put through 4,000 letterboxes, regular awareness posts on social media and in the local press, and yellow signs placed on Crow Lane to "bring it to as many people's attention as possible".

The Chesterfield Civic Society reportedly complained that a number of streets were not properly notified of the consultation.

"We believe that the consultation that we carried out was appropriate," the council responded at the time. "During a three-week period we did all we could to promote the consultation, we dropped information through the letterboxes of 4,000 homes on or close to the route, used our social media accounts and the local media to bring it to as many people's attention as possible."