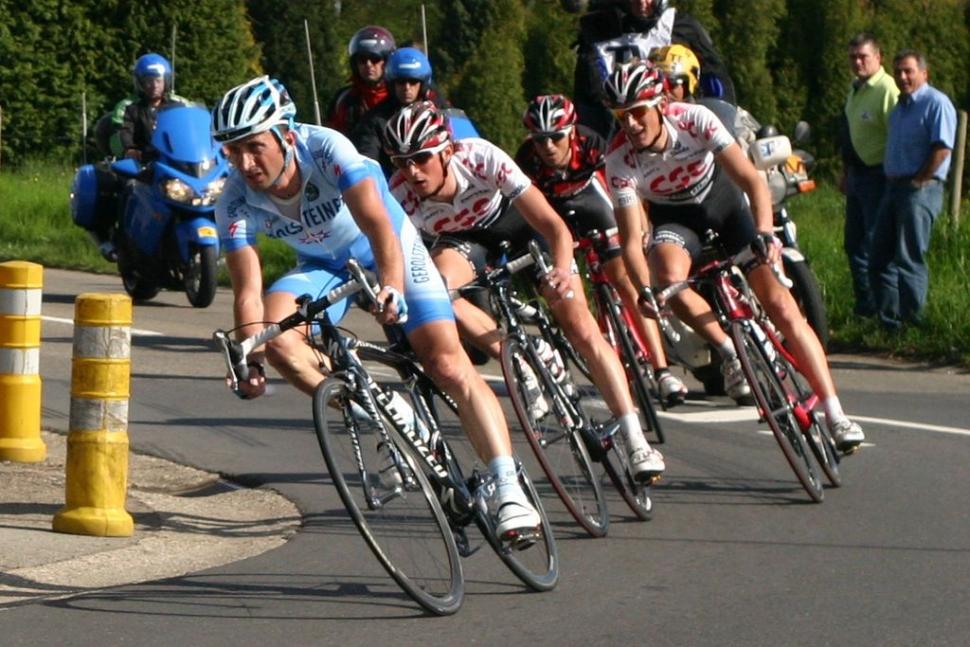 Davide Rebellin, who turned 50 in September, will next year ride his 30th season as a professional cyclist after signing a one-year contract with his Work Service Vitalcare Vega team.

The news comes just three months after the Italian sustained a double leg fracture after a crash at September’s Memorial Marco Pantani one-day race that had him briefly toying with the idea of retirement – and not for the first time, although somehow whenever he has spoken of hanging up his wheels, he has never quite got around to doing it.

Now, the three-time Fleche Wallonne winner – the first of those in 2004 when he also won Liege-Bastogne-Liege and the Amstel Gold race for an unprecedented hat-trick that only Philippe Gilbert has since emulated – has decided to ride on with the Italian UCI Continental team.

In September – shortly after his landmark birthday, but before his crash – Rebellin shared some of the secrets of his longevity in the peloton in an interview with BBC Sport.

"It's all about passion,” he explained. “To train hard and follow a specific programme is normal for me. I am a bit worried about what will come next, because my body still demands it. Desire is there and I will continue as long as I am competitive and enjoy myself. When my time comes I will quit.

“People appreciate me, even more than in my winning days, because they know how hard it is against younger riders. I even raced with some of my old competitors’ sons. I receive a lot of support from amateurs on social media, they praise my passion and longevity, I know I am a role model and that motivates me.

“I am a lucky man because I do what I love most; riding has never been a job. I get up in the morning and I go out on my bike, I don't have fixed working hours and I am still living my dream. I won races I dreamt of as a child and I am still here, it's great.”

As for his diet and training routine, he said: “I have a lot of experience and I know myself. I don't have a trainer or a nutritionist; I know how to train and what to eat. My training method is the one I used in my early days, albeit a few changes. With age increasing, what you lose most is strength; I have always had stamina and I don't need to train that with 50.

“I do spend six or seven hours on my bike, but that's a pleasure. I train my explosiveness, with specific work on the road as well as in the gym. In other times you would train first and find your shape during the races, now you have to be fully fit before you put a number on your back.

“Love and passion are key in training and racing, in nutrition and sleep. My wife and I live a simple life at home; we get up at 6:30, do some muscle toning, get a good breakfast and then I am out on my bike at around 9:30. I eat a light meal when I am back, then we take dinner at around six and go to bed at nine.

“We feel the benefits of such a regular life. I am almost vegetarian, but it's hard to keep up with it in hotels. I haven't been eating any red meat for years and I have been living gluten free since 1997. I have a balanced nutrition plan, I recover faster and I feel better. Food is the fuel of your motor.”

Rebellin’s long career can be split into two distinct parts, falling either side of the ban he received after testing positive for CERA at the Beijing Olympics in 2008, where he had finished second in the road race.

News of his positive test broke in April the following year, just after he had won Fleche Wallonne for the third and final time, riding for the UCI Professional Continental team Serramenti PVC Diquigiovanni-Androni Giocattoli, which he had joined at the start of 2009 after a career that, until then, had been carried out in the top flight, most recently with Gerolsteiner where he spent seven seasons.

He returned to racing in May 2011 with UCI Continental team Miche-Guerciotti, but in a year when the US Anti-Doping Agency finally brought Lance Armstrong to justice and other riders from that era confessed to their own use of drugs, Rebellin was something of a pariah for top-tier teams at least, and – four years with the Polish UCI Professional Continental team CCC Sprandi Polkawice apart – the remainder of his career has been ridden in cycling’s third division.

Speaking to BBC Sport about his doping ban, he said: “That was a turning point in my career; I was suspended for two years, but it was as if it had been seven or eight.

“No big team wanted me anymore, organisers avoided me. It was a difficult spell, although I kept training as if I would go back to racing the next day. When I resumed in 2011, I started winning from the off. I was 33 but I really hit my peak.

“Everyone knew my worth, but no-one wanted to give me a chance; this also pushed me to carry on and prove them wrong. I won the Giro dell’Emilia at 44, but that didn't really change anything.

“Today I like to help my younger team-mates too; I am a sort of sport director within the peloton. I think less of my own result and put myself more at their service, making the pace and breaking the wind.”

He added: “It's all about passion. I am a lucky man because I do what I love most.”