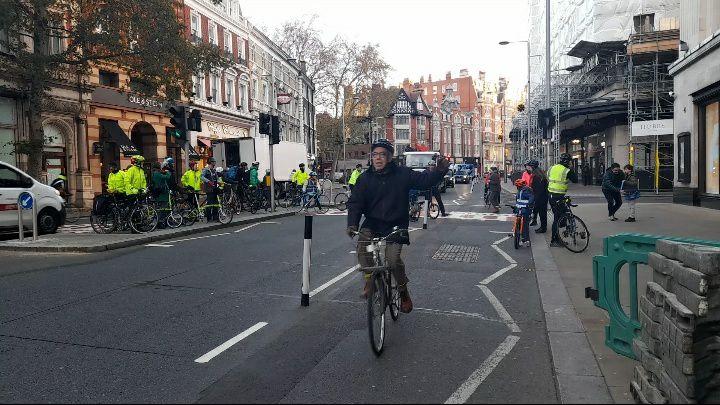 The Royal Borough of Kensington and Chelsea (RBKC) is to revisit its decision to remove segregated cycle lanes from Kensington High Street. Council leader Elizabeth Campbell said that the review would be carried out by the entire leadership team except for lead member for transport Johnny Thalassites who made the decision to scrap the scheme.

In September, the council introduced temporary segregated cycle lanes on Kensington High Street in response to Covid-19, in a bid to support the local economy and to help people walk and cycle safely while capacity was reduced on public transport.

The lanes had only been in place for seven weeks when, at the end of November, RBKC announced that it planned to remove them.

Thalassites said that businesses had, “told us loud and clear that they believe the experiment has not worked.

He added: “By removing the temporary lanes as lockdown lifts, we hope to help get the High Street moving again and give our local economy the best possible chance of a good December.”

The move was widely condemned, including by Mayor of London Sadiq Khan, while Prime Minister Boris Johnson was said to have gone “ballistic” about it.

Responding to a freedom of information request from the Bike is Best campaign group asking how it had assessed whether or not the cycle lanes were working, the council admitted: “No criteria or metrics were developed by which the scheme was to be assessed.”

A freedom of information request has since revealed that the council ‘choreographed’ press statements from local businesses when announcing the abandonment, with its head of news editing what was supposed to be an independent press statement from the chair of Kensington Business Forum (KBF).

In a statement on its website on November 29, RBKC then claimed that KBF had asked that the temporary lane, “be removed in time for Christmas shoppers to visit the High Street.”

KBF has since clarified on its own website that it took no such position.

“We recently passed on the business views, both of those in favour and against cycle lanes, as a representative body for Kensington W8 Business,” says the statement. “The views shared with Kensington & Chelsea are of local businesses and not that of our Executive Committee.

“Regrettably this has been represented, in certain public forums, as our opposition to cycle lanes. This is not the case, but the views of local businesses (both for and against) who provided feedback to the Kensington Business Forum for this current scheme.”

Computer analysis of Transport for London (TfL) traffic cameras on Kensington High Street has shown that congestion has worsened since the lanes were removed – largely because the lane is now often blocked by parked vehicles.

In a statement yesterday, RBKC said its leadership team would take a look at a new report on the lanes in March.

Campbell said: “I have asked the council to look again at the decision to remove temporary cycle lanes on Kensington High Street, and I will be seeking views and a decision from the entire Leadership Team. We will do this without the Lead Member for Transport in the interest of fairness and balance.

“It is important we consider the most up-to-date information and views we have available, and so officers have been asked to prepare an up-to-date report for us to consider at our meeting in March.

“I know the depth of feeling on both sides of this issue, so it is important we make the time to consider this further and understand how the Council can be a leader in all forms of active and sustainable travel.”