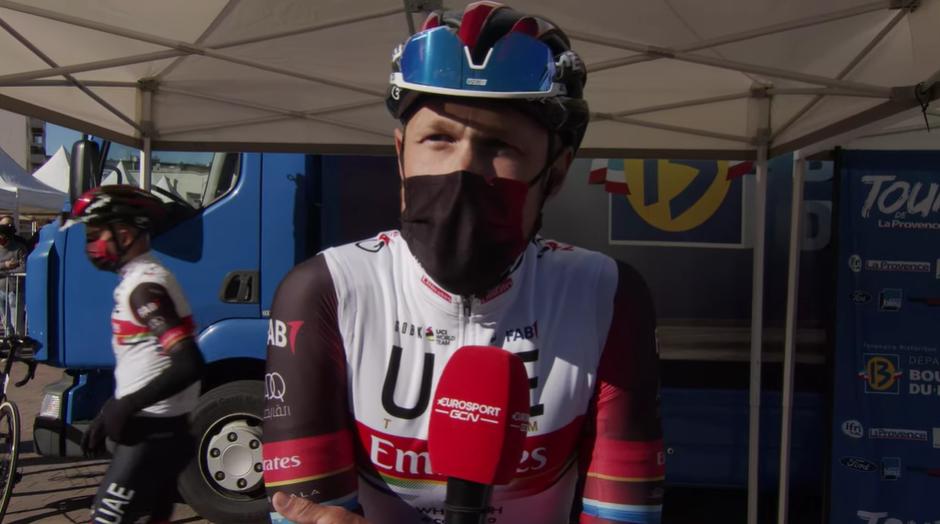 Responding to Chris Froome’s suggestion that TT bikes should be banned for safety reasons, the Italian rider said that “sharing the roads has to be nicer than it is now” and called on his fellow pros to “send a message”
by Ryan Mallon

Matteo Trentin has responded to Chris Froome’s suggestion that time trial bikes should be banned from professional cycling for safety reasons by arguing that the problem lies not with the type of bike being ridden, but “the amount of people in cars today”.

Following his former Ineos team-mate Egan Bernal’s devastating crash while training on his TT bike in Colombia last month, Froome – who has never recaptured his previous grand tour winning form after suffering his own career-threatening crash before the time trial stage of the 2019 Criterium du Dauphiné – posted a YouTube video earlier this month which floated the idea that time trial bikes should be banned from professional cycling.

The four-time Tour de France winner’s suggestion echoed Tom Pidcock’s earlier comments that it is now too dangerous to train on TT bikes on public roads, though the idea was dismissed by Wout Van Aert as “bullshit”.

Froome’s decision to spark a debate about the use of time trial bikes in cycling was also prompted by UAE Team Emirates rider Trentin’s comments on the wider issue of rider safety, particularly concerning the inclusion of gravel sections in road races.

The Italian classics rider is one of the peloton’s most outspoken activists on the subject of safety, and represents his fellow pros in the riders’ union, CPA, and by sitting on UCI committee meetings.

Speaking to Cyclingnews before the start of yesterday’s Omloop Het Nieuwsblad (where he would go on to finish seventh), Trentin responded to Froome’s comments by initially joking, “I will never be good in the TT, so I don't really care”.

Turning to more serious matters, the 32-year-old said: “Of course, the point of Chris of training on the road with the TT bike is correct, but I would add that it's not a TT bike problem; the problem is the traffic, the problem is the amount of people in cars today.

“You're not protected from crashing into a car, and people are getting more and more anxious to pass a bike for basically no reason.

When asked how the current situation on the roads can change, Trentin said that the problem goes far beyond the professional scene and, echoing the views of charity Cycling UK, argued that a long-term shift in attitudes among road users needs to occur.

“It's habit. You need to change people's minds and that takes a lot of time,” he said.

“It's not a pro cycling thing. We are a small fraction of the people biking on the road every day — a really, really small fraction.

“The bigger user of the roads on the bike are tourists or even kids going to school or people going to work, and we need to be more concerned about them than about us. It's our job, we know how to act on the road.

“Of course, an accident can be behind every corner, but if you see the statistics, it's like 99 percent of the people injured on bikes by traffic are normal people.”

Trentin called on the professional peloton to “send a message” by advocating for increased protection for cyclists on the roads, something he says which would inevitably help the long-term health of the sport.

He said his fellow pros should “be more involved in spreading the message to the world, even in the races — something we don't do for the moment. It's something like when the races become a breakthrough problem in the sport.

“Every sport sends a message. For the future of cycling, which parents are going to have their kids at 12 or 13 going on the road? I think nobody. If you want to have riders in 20 years’ time you need to solve this problem, you need to address this problem.”