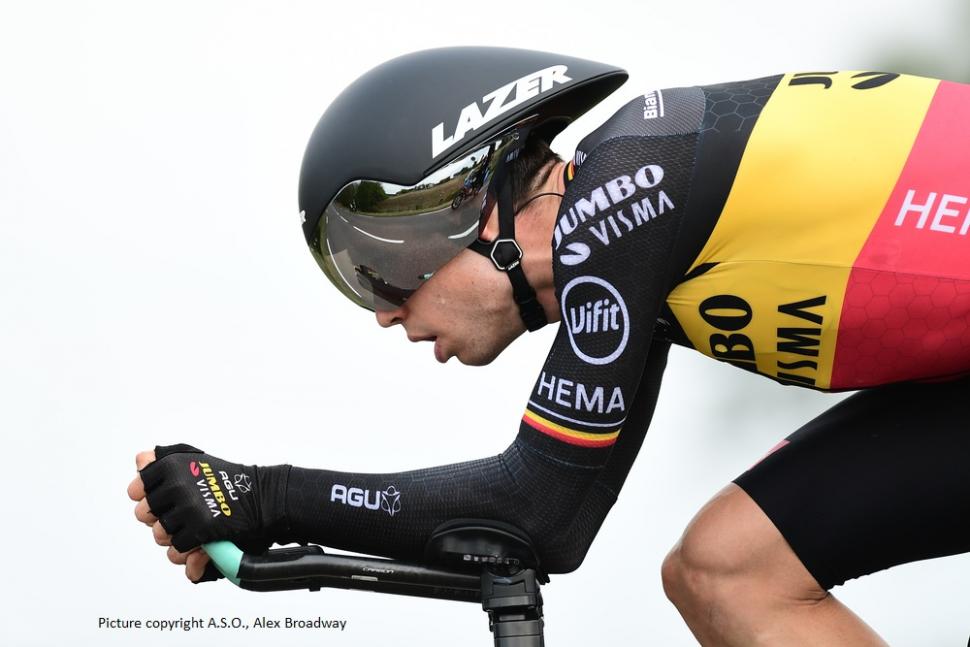 Ahead of Spring Classics campaign, Belgian also calls for end to pre-race COVID-19 tests
by Simon_MacMichael

Wout Van Aert has said that a suggestion by four-time Tour de France champion Chris Froome that time trial bikes be banned and road bikes used instead is “bullshit.” The Jumbo-Visma rider, who begins his spring classics campaign at next week’s Omloop Het Nieuwsblad, has also called for an end to riders being tested for COVID-19 ahead of races.

Froome – who has never recaptured his previous form after a near career-ending crash while undertaking a reconnaissance of the time trial course at the Criterium du Dauphiné in June 2019 – floated the idea in a YouTube video earlier this month that time trial bikes be banned, in reaction to the injuries sustained by his former team-mate at Ineos Grenadiers, Egan Bernal.

But Van Aert – who himself had a season ending crash in a time trial at the Tour de France in 2019 – rejected the Israel Start-Up Nation rider’s suggestion in an interview with Het Nieuwsblad, with the Belgian rider’s comments quoted on Cycling Tips.

“Very simple: bullshit,” he said. “You can say, ‘I no longer train with a time trial bike on the public road, because that is dangerous’. That’s right, I can speak for myself about that.

“But as a rider you also have to take care of your own safety. That’s not to say it’s Bernal’s own fault for riding into a bus. That’s an extreme accident, but I think it’s a bit weird to ban the time trial bike because of that.

“Time trials are super interesting,” continued Van Aert. “It is the only discipline in cycling where you have a bit of the Formula 1 feeling and can really come up with innovation. Where it’s not just steps. Sometimes the price can be more than that.”

Calling for pre-race tests on riders for the coronavirus to be scrapped, Van Aert stressed that he was not a medical expert before confidently sharing his own opinions on COVID-19.

“The fear is there now,” he said. “You don’t even have to be sick, one positive test and all your preparation has been for nothing.

“I’m not going to present myself as an expert or virologist, but just now that everyone is celebrating that the corona crisis is over, we are going to the craziest measures we’ve had in two years.

“I think it’s time to let go of the whole test story and start looking at corona the way we view other diseases.

“We weren’t tested for the flu or a cold in the past,” he pointed out. “Of course, if you get sick, you go home. But you see how easily the virus goes around in the first races. It is definitely something that will come into play this spring.

“I understand the measures that are now in place, but it is a situation that is not sustainable,” continued Van Aert, who has been training on Tenerife ahead of a spring campaign where the 2020 Milan-San Remo winner will be targeting two other Monuments – the Tour of Flanders and Paris-Roubaix.

“If omicron remains what it is now – not super dangerous, if I may say so – then I would be sad if we have to go on for a whole year as we are now,” he added.