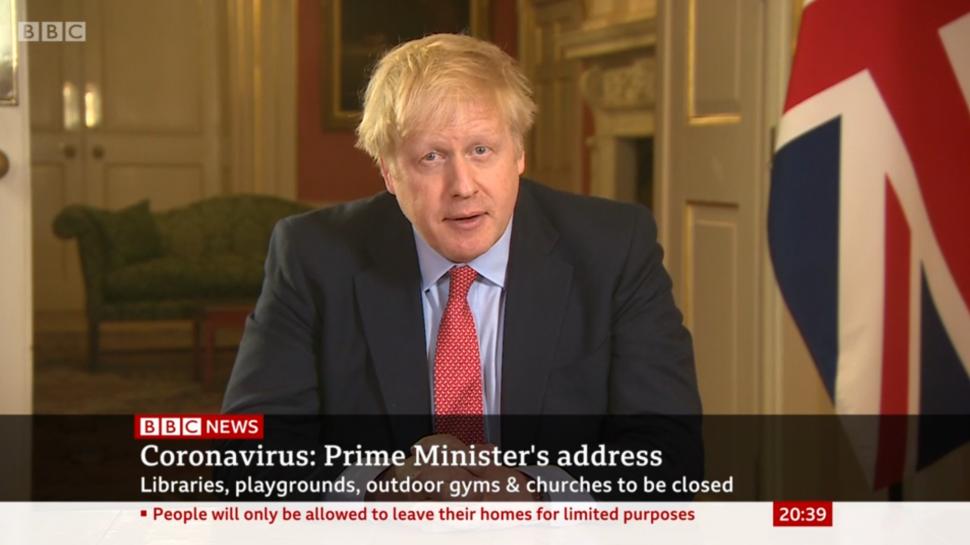 Prime Minister says cycling allowed for exercise - but only alone or with members of household; bike shops to remain open

Prime Minister Boris Johnson has this evening put the United Kingdom into lockdown to tackle the coronavirus pandemic ,with people told to stay at home, with a handful of exceptions - one being that they can undertake one form of exercise a day, including cycling, provided they do so alone or with members of their household. Meanwhile, bike shops are among the essential retailers permitted to continue trading.

He said that people would be permitted to carry out “One form of exercise a day – for example, walk, run or cycle – but on your own or with members of your household.”

People will also be able to leave their homes for shopping for basic necessities, for any medical need or to care for a vulnerable person, or travelling to and from work but only if absolutely necessary, eg the work cannot be undertaken from home.

The measures, taken to try an stop the spread of the virus between households and ease pressure on the NHS, will initially be in force for three weeks before being reviewed, and the Prime Minister has said this evening that the police will have the power to enforce them.

While supermarkets and chemists are permitted to remain open, retailers selling non-essential goods will have to shut, the examples he gave were "clothing and electronic stores."

But, perhaps recognising the importance of bikes not only as a means of undertaking exercise but also getting to shops or work during this unprecedented crisis, and the importance of repair and maintenance, bicycle shops are among the retailers excluded from that requirement and will be allowed to continue to trade.

Please join me for an important update on #coronavirus #StayHomeSaveLives pic.twitter.com/QSlIOIaYsF

The new rules come in as the number of cases diagnosed in the UK have risen to 6,650, with 335 people having died to date – respectively, the 10th and 7th highest in the world.

They follow a weekend in which there was widespread media coverage of people, including cyclists on group rides, widely ignoring social distancing requirements to keep 2 metres apart from others.

Many – including, it has been reported, government ministers – reacted with shock and anger to images of people treating the first warm weekend of the year as though it were a bank holiday, with beauty spots, seaside resorts and parks in London all seeing what in many places were described as unprecedented crowds.

That followed a Friday night when many pubs the length and breadth of the country were packed after Johnson had announced earlier in the day that they would be required to shut that evening, along with restaurants and cafés.

While the Prime Minister did not stipulate how lthis evening how long exercise should last for, on social media many are urging fellow cyclists to ride in moderation, to ride on their own or with people with whom they live, in line with the government’s latest stipulation.

Others go further and say that is staying at home and not becoming a potential spreader of the virus or, in the event of a crash, require hospital treatment, outweighs the individual’s choice, as it currently stands, to go out on their bike.

And while cyclists may be allowed to go out for a ride for exercise at the moment, it’s not too much of a stretch to predict that should images appear showing some cyclists ignoring government guidelines and continuing to ride in groups, it may be banned altogether – as it has been in a number of European countries in the past week or two.

Without concrete guidance from the government regarding the duration of exercise, it's an individual matter for now.

With reports from the continent about police officers stopping cyclists even before full bans came in, however, one thing to consider might be how you would explain yourself if you were, say halfway through a ride and a couple of hours from home – and what their reaction to that might be.

We will be updating the article we published on Sunday, How to cycle responsibly in a time of pandemic, to reflect the latest situation.

In response to this evening's statement, the charity Cycling UK updated its advice to riders, including that "Under no circumstance should you cycle or take part in any cycling activity in groups."

Here is their reaction in full:

Following the Prime Minister, Boris Johnson’s address to the nation announcing strict new curbs on life in the UK, Cycling UK has updated its advice on cycling.

Although people are now being told to stay at home during the pandemic, one form of exercise is allowed a day.

This means it remains advisable for people to cycle for their health, fitness and well-being, but in line with our previous guidance, you should only do this alone or with members of your household unless any of them have reason to self-isolate.

Under no circumstance should you cycle or take part in any cycling activity in groups.

This is critical to stop the coronavirus disease spreading between households.

We are also advising that anyone who needs to travel to work if it’s absolutely necessary should consider cycling to avoid using public transport, where possible.

The guidance for avoiding contamination remains unchanged, keeping at least two metres away from anyone else, regularly washing your hands and catching coughs and sneezes in tissues and throwing them away immediately. See further advice on the NHS website.

We will continue to evaluate the latest advice from Government and update our guidance accordingly.

Earlier in the day, and prior to the Prime Minister’s statement and the subsequent confirmation of which retailers would be allowed to continue trading, the charity had set out its case for why bike shops should be considered essential and not be forced to close. Its head of campaigns, Duncan Dollimore, said:

Cycling UK fully appreciates the urgent public health crisis presented by coronavirus, that this is a fast moving situation, and that the UK Government are having to make difficult decisions at pace about whether businesses, facilities and public places can remain open and if so subject to what conditions.

Presumably, some businesses and facilities will remain open however, as nurses, care home workers and essential workers will still have to travel to and from work. The rest of us will occasionally still need to collect food and medicines either for ourselves or for others who are unable to do so.

Cycling those essential journeys rather than jumping on a bus or crowded tube allows people to comply with the social distancing guidance, but still complete those critical journeys.

Bicycle shops play a key role in enabling people to do this, so Cycling UK would urge the Government to bear in mind the benefits of allowing bike shops to remain open when considering which business have to close and which can remain open.”