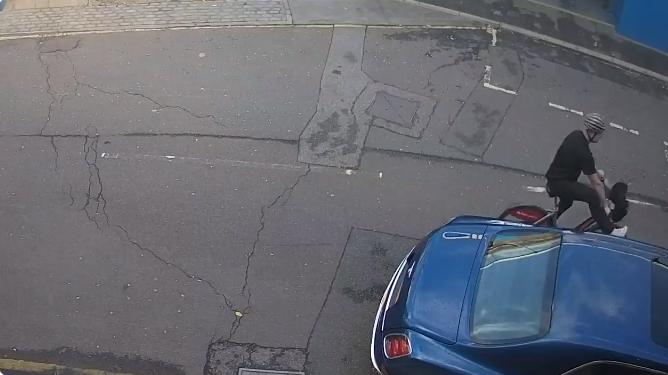 Pimlico Plumbers has posted a video to Twitter calling for help in tracking down a cycling “criminal” who allegedly kicked out at a wing mirror on the company founder’s Bentley – but a number of users of the social media network have called out the footage as fake, with one accusing the firm of staging a “false flag” attack to whip up resentment against bike riders.

WANTED: HAVE YOU SEEN THIS CRIMINAL? 🔎🚲

We are appealing for assistance in tracking down a criminal who attacked the private property of Pimlico’s Founder, Charlie Mullins, at 9:12am yesterday.

The tweet links to a blog post published on the company’s website on Friday, the Lambeth-based company said: “We are appealing for assistance in tracking down a criminal who attacked the private property of Pimlico’s Founder, Charlie Mullins, at 9:12am yesterday, Thursday 20th August.

“As can be seen in the footage below, the thug came round the corner before deliberately crossing over to the wrong side of the road. He coasted closely past Charlie’s Bentley which was parked directly outside our HQ on Sail Street, ignoring the 1 metre rule. The man then clearly raised his foot and attacked the wing mirror, causing significant damage.

“We are on the lookout for this person, and have already reported this unacceptable legal breach to the police. We have a zero tolerance policy for attacks on private property at Pimlico and are not taking this matter lightly.

“Alternatively please contact the police and quote the crime reference no. 1222248/20.”

However, many Twitter users – including Mike van Erp, also known as Cycling Mikey, who earlier this month filmed one of the company’s drivers using a mobile phone at the wheel – suggested that the incident may have been staged, raising a number of concerns about the footage.

Apparently shot on three separate CCTV cameras, the footage – some of which has been slowed down, presumably for dramatic effect – shows a helmeted cyclist apparently kicking out at the Bentley as he passes it.

While, predictably, the Twitter post has attracted the usual anti-cyclist comments, many have questioned the veracity of the footage, with van Erp suggesting it may have been a publicity stunt by the firm.

Some have suggested this is a publicity stunt, a false flag operation. Where is the picture of the broken mirror? Why is Charlie parked illegally on a blind corner? Given recent history of Pimlico/Charlie and his cycle hatred, and the resulting public backlash, I'm sceptical too. https://t.co/GH1OCyTN78

Secondly I have a crime report reference from 4th August 2020 and that number is 6532437/20, whilst the reference claimed on the Pimlico Plumbers website is 1222248/20, supposedly from 20th Aug. @PimlicoPlumbers I call bullsh*t on your story.

Others pointed out that the wing mirror itself appeared undamaged after the cyclist had passed, while the lack of reaction from the man shown crossing the road in the video has also raised concerns about the veracity of the footage.

Wing mirror still seems to be attached after the rider has passed, too.

How about the pedestrian crossing infront of the car at the time too. Hardly reacts to seeing an alleged crime do they.

The way the vehicle was parked also sparked suspicions, as did the fact the cyclist is wearing a helmet – not unknown among users of Santander Cycles, but rare enough to raise doubts.

Anyone else spot the cones at the front of the parked car so that there's a clear shot from the front of the car, otherwise chances are one of the two vans further along the road would have blocked that view?
Why where they there if not to stop parking?

Just in defence of the cyclist, whoever they are - my partner and I often take cycle helmets when we go out on Santander bikes. I think for people eho leave their house planning on hiring one, it's not terribly uncommon to take a helmet. Less likely for impromptu use though

Another Twitter user suggested that the video had been staged to stoke up anti-cycling sentiment in response to the footage van Erp had captured of the company’s driver three weeks ago.

I would say they know exactly what they are doing here, and the potential dangerous consequences to someone's health for life. This is just revenge for being slighted when one of their drivers was reported for bad driving. This is how gang turf wars operate. We see you Pimlico.

Finally, this Twitter user expressed surprised that there were no images of the damaged wing mirror itself.

Why haven’t we seen a still image of the damages wing mirror ? Hmmmmm .

Cycling Mikey’s footage of the Pimlico Plumbers driver using his phone while in his vehicle, by the way, was filmed just days after the company toned down a blog post written by its PR team, but purporting to come from Mullins himself, which spoke of “cycle fascists” together with a mocked up TfL image that accused cyclists of “taking f**king liberties.”

We have approached Pimlico Plumbers for their response to the concerns raised about the video.