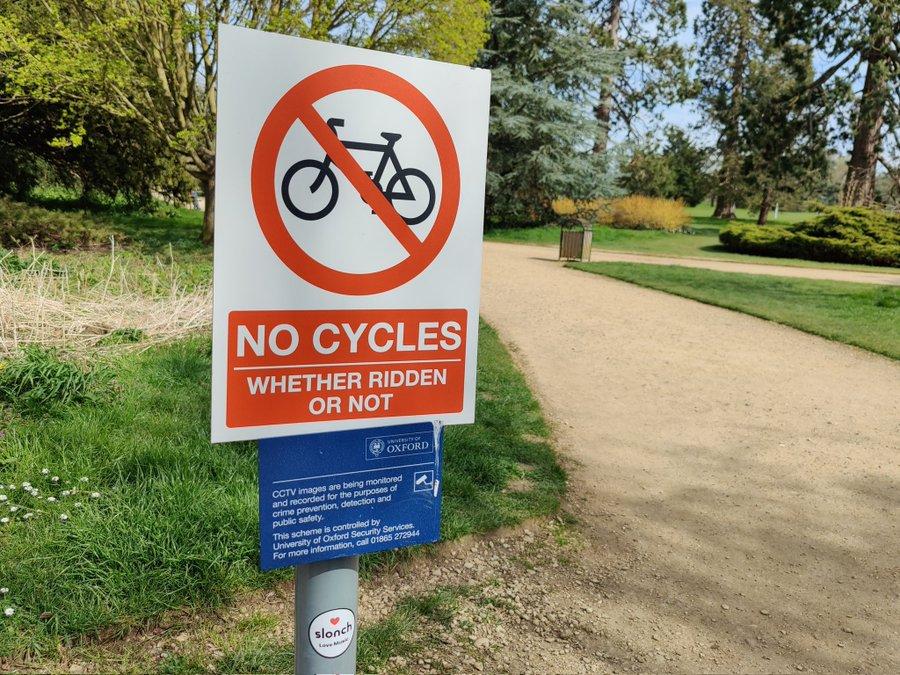 No cycles whether ridden or not: "Ridiculous and petty" sign banning bikes in Oxford University Parks slammed

Signs in Oxford University Parks ban those on bikes... even if they get off and walk
by Dan Alexander

Oxford University Parks' no cycling policy has been labelled "petty, discriminatory and ridiculous" after signs were spotted banning cycles, whether ridden or not.

Vocal cycling advocate and Vine on 5 presenter Jeremy Vine called the signs "disgusting", while the cyclist who took the photo said it is a "ridiculous restriction in a so-called cycling city".

Sharing the photo to Twitter, they said: "This has annoyed me before and it annoys me now. How petty, discriminatory and inaccessible is Oxford University that they don't even allow cycles to be pushed through Oxford University Parks? Ridiculous restriction in the so-called Cycling City".

This has annoyed me before and it annoys me now. How petty, discriminatory and inaccessible is @OxUniParks @UniofOxford that they don't even allow cycles to be pushed through Oxford University Parks? Ridiculous restriction in the so-called Cycling City. pic.twitter.com/EEUxPgwbrY

Ben told us: "It’s been there a little while; I first noticed it and tweeted about it back in April 2020. I don’t live in the city but visit family."

It is believed the ban has been place for at least 15 years, and although inconvenient to anyone travelling to the area by bike, The Parks do not have a through route to anywhere. Running along the southern boundary of The Parks, separated by a fence, is a shared-use path which then crosses the River Cherwell and provides a cycle route to St Clements and Marston.

The University Parks, often called The Parks, is a 70-acre site in the heart of Oxford, overseen by a "Superintendent" and maintained by a team of gardeners who also work on 200 other green spaces across the city.

According to The Parks' website, it is "an escape from the hustle and bustle of the City, but conveniently located right at its heart, is the green oasis offered by University Parks – with something to please everyone.

"For those that enjoy sport there’s the opportunity, depending on the season, to catch a game of cricket, lacrosse, tennis, football or rugby. Harry Potter fans may even encounter a game of Quidditch in play."

As per The Parks' rules, enforced by University of Oxford security services, no cycling or cycles are allowed, but Oxford University Security Officers and University Parks staff "have the authority to cycle through University Parks to enable them to carry out their duties." 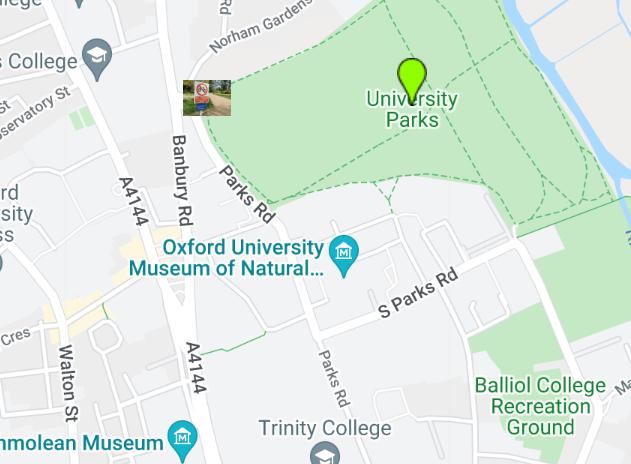 road.cc has contacted the University of Oxford and University Parks for comment on the signs, and will update this story with any information we receive.

Last month, the University of Oxford paid tribute to an "incredibly kind and delightful colleague" after a second faculty member was killed while cycling on the city's roads in the space of a month.

Oxford University said it will "push for investments" to improve cycling safety after the death of Dr Ling Felce, who died in a collision with a lorry being driven at The Plain on 1 March.