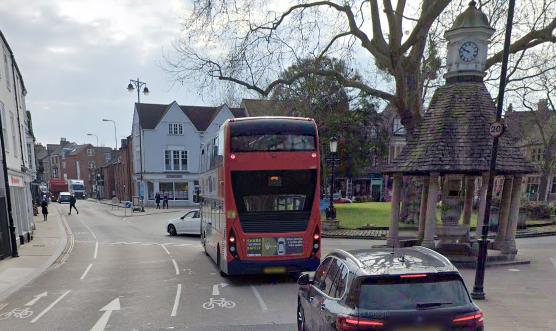 “White lines do not work”: Oxford campaigners call for urgent action after cyclist is killed at notorious junction

Cycling campaigners and local councillors in Oxford have called for an urgent review of cycling safety in the city after a woman in her 30s was killed riding her bike at the notorious roundabout junction of St Clement's Street and The Plain on Tuesday.

Police have appealed for anyone who witnessed the incident or who has dashcam footage of the collision to contact them.

Tuesday’s fatality comes less than a month after a cyclist, a university worker in her 40s, was killed when she was struck by a lorry driver on the A4165 near Oxford Parkway station.

> Campaigners call for “immediate changes” after cyclist was killed in Oxfordshire

The Plain roundabout, the scene of Tuesday’s crash, has long been criticised by cycling campaigners for its intimidating layout and lack of protection for people on bikes.

In 2013, a scheme to overhaul the roundabout, where Cowley Road, Iffley Road and St Clement’s Street meet with traffic then being funnelled across Magdalen Bridge towards the High Street, was financed with the help of a £835,000 Cycle City Ambition Grant awarded by the Department for Transport.

However, from the outset local cycling campaign group Cyclox, supported by Cycling UK, argued that the plans would not encourage less experienced cyclists – or those who do not ride a bike at all – to travel through the roundabout, and called for an element of segregation to be introduced.

In response Oxfordshire County Council, the authority responsible for roads in the city, made some revisions to the original proposal and while the completed scheme does feature a cycle lane, riders are not separated from motor vehicles as the council claimed that there was insufficient space to permit such infrastructure.

Yesterday, Cyclox’s chair Dr Alison Hill reiterated the group’s call for protected cycle lanes at the junction and across the city.

“We all should be calling for a ‘vision zero’ which is about total intolerance of any road user death because it is just awful for any road user to lose their life,” Dr Hill said.

“There is this local consultation out called the Local Transport and Connectivity Plan, and I know we should be using that opportunity to call for urgent action faster and sooner to make our roads safer.

“That involves a large number of different actions. It involves things like reducing speed and reducing traffic volume, which is utterly crucial because people see the huge number of cars and just feel too intimidated to get on their bikes.

Councillor Brown said: “While it is too soon to know if this incident is related to the junction design, the city council will be writing to Oxfordshire County Council, asking them to urgently review the safety of The Plain roundabout.

“It is a key route into and out of the city centre, and despite the redesign which the county undertook a few years ago, we are still seeing accidents and fatalities.

"We believe that there is an urgent need to look at what can be done to improve safety, and to ensure that we involve cyclists and cycling groups as part of this review.”

She added: “We welcome the work the county council is currently developing on cycle quickways and quietways, but major changes are needed in order to create a safe road network for everyone – for cyclists, for pedestrians, and for drivers.

“In order to achieve this, road space should be reallocated to create safe and segregated cycle lanes.”

“I’m devastated for the family and friends, as it’s due to something that really shouldn’t be happening in our city,” the councillor said.

“My wife cycles that section every day, and what’s happened is such a terrible loss of life.

“We have to massively improve the infrastructure for cyclists. I’ve been calling for quite a while that white lines do not work.

“We need dedicated cycling infrastructure, something which stops vehicles going in cycling lanes, a physical barrier.

Please note comments are now closed on this story.