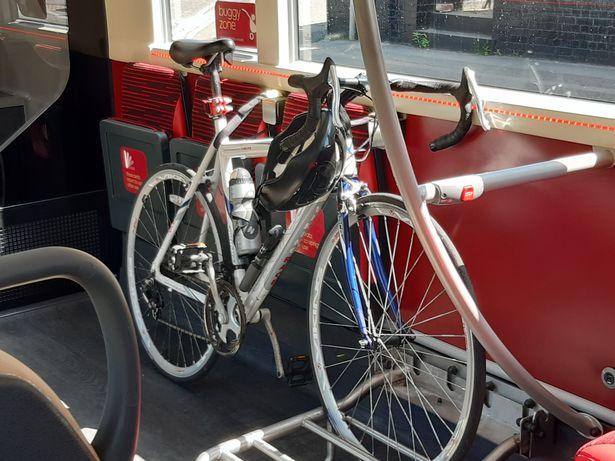 Bus passengers in Yorkshire can now take bicycles on board with them for free after a local bus operator invested £2 million in “state of the art, environmentally friendly” double decker buses.

The Eastrider buses, which cost £260,000 each, will operate on East Yorkshire Buses’ X46 route between Hull, Beverley, Market Weighton, Pocklington and York and the 45 service between Bridlington, Driffield and York.

According to Ben Gilligan, area director of East Yorkshire Buses, the bike racks on the new buses, which can each carry two bicycles, are a “game changer,” reports the Hull Daily Mail.

“When we ordered the new buses, we wanted to make sure they had everything passengers wanted,” he explained.

“The technology on board means people can make the most of the time they spend on the bus, whether that’s working, catching up on the latest shows, or simply sitting back in our comfortable seats and enjoying the view.

“At the moment, everyone’s talking about getting active, so the ability to bring your bike along is a game changer.

“It opens up huge possibilities for both commuters and those who cycle for fun to make the most of the endless opportunities for cycling in our amazing part of the country,” he added.

The company has also produced a video showing how to use the bike racks, which flip down with users then placing the rear wheel in the rack and use a belt to secure the bicycle.

From the video, however, it does appear that bikes might take up some space that might otherwise be used for pushchairs or wheelchairs. The racks also look unsuitable for non-standard bikes.

The website Bikes On Buses highlights that in Europe and elsewhere, where bus operators do make provision for bicycles, it tends to be done through racks attached to the front of the vehicle – something that is not allowed under UK law.

Last year, we reported how James Freeman, managing director of First West of England, which provides bus services in Bristol, Bath, Somerset, South Gloucestershire and West Wiltshire, had spoken about the issues regarding carriage of bikes on buses at a regional transport forum held by the West of England Combined Authority.

> Buses in West of England to get trailers for bikes?

He ruled out stowing buses in the passenger compartment because other passengers might need the space, and said that rear racks came with safety and security risks, instead suggesting that trailers might be the answer.

“The bike-on-a-bus issue is an interesting one because bikes are prickly things and they don’t sit comfortably inside a vehicle where there are people walking about and are likely to be thrown about,” he explained.

“So it’s quite an issue as to how you can safely get a bike into a vehicle and put it away so it’s neatly and safely stowed.

“The issue we have with a lot of our buses is they’re rather busy, particularly on the lower deck of double-deckers because that part of the bus is used by people in wheelchairs, people with kids in buggies, by people who don’t enjoy stairs.

“All these people need that lower deck section between the front axle and the back axles.”

He continued: “My own vote would be to put bikes on the outside because they live outside, so why shouldn’t they?

“Unfortunately we have hit a complete brick wall because the DVSA says it might be alright for the United States and for New Zealand but it won’t do for the UK — you cannot put bikes on the front of buses, you have to have them on the back.

“The back is the most dangerous place of a bus. And I have mental images that people will just quietly walk off with them while the bus is waiting for a traffic light.”

“I have wondered about trailers,” he added. “In Europe there are bicycle trailers towed by vehicles.

“That’s conceivable. I’m not terribly keen on it but it might be the answer.”