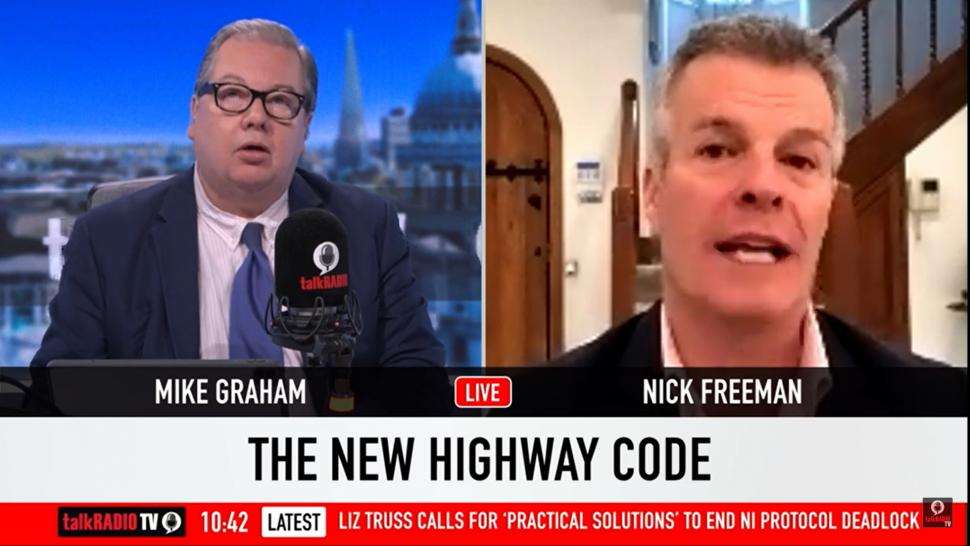 Nick Freeman, the lawyer notorious for obtaining not guilty verdicts for celebrities charged with motoring offences, slammed the changes as "ill-conceived"...
by Dan Alexander

Nick Freeman, often know by his Mr Loophole nickname, made an appearance on Mike Graham's talkRadio show this morning to slam the new Highway Code changes, and warned of "carnage" on Britain's roads.

Freeman, who regularly makes headlines for getting celebrities off driving charges, was highly critical of the changes which come into effect on Saturday 29th January, particularly the Hierarchy of Road Users.

Speaking on 'The Independent Republic of Mike Graham', Freeman predicted "carnage" and warned "our roads are going to be much more angry and much more dangerous."

"It's well-intentioned but ill-conceived," he said. "The whole point of this is to increase safety. We're all in favour of trying to make our roads safer. Safety doesn't equal priority. I fear it is going to be carnage. Particularly for the most vulnerable people.

On the issue of road positioning, Freeman was characteristically outspoken, saying the advice for cyclists to ride in 'primary position' (in the centre of the lane) in certain situations "would not end well".

The Code will tell riders to adopt primary position on quiet roads (but to move over when road users approach from behind), in slower moving traffic, and approaching junctions where overtaking is dangerous.

"I think what the government needs to do is let everybody use common sense, and that tends to work because most people have common sense.

"What they're trying to do is control us, take that away, by putting these rules in place it is going to have the reverse effect. One wonders who is advising the government. Who are the people saying this is a good idea?

"There needs to be a balanced, sensible approach which works for everybody not just for a tiny minority, that's what we've got here. Cyclists need to play their part. I saw a picture of Chris Boardman cycling the other day. He wasn't wearing a helmet or a hi-vis jacket. It doesn't send out the right message."

Freeman went on to echo a sentiment expressed by the AA's head of roads policy Jack Cousens over the weekend, warning the lack of publicity, and polls showing many road users are unaware of proposed changes is worrying.

"The other very alarming thing is that nobody knows about it," Freeman explained. "It's coming in on Saturday but the polls suggest a significant amount of motorists don't even know there is going to be a change, and of those, some are saying 'we're not even going to look, we don't care', which isn't healthy as motorists obviously need to be educated."

The discussion also included criticism of the Code's guidance on cycle lanes, with host Graham asking "if cyclists are now being told they don't have to use cycle lanes what was the point of butchering the road system to put all those cycle lanes in at a significant cost to the taxpayer?"

Freeman replied: "They never had to use them anyway. They're spending hundreds of millions of pounds on cycle lanes but it was never a mandatory requirement that they use them. So what is the point? Either have them and say they're there for a reason or let's not bother at all."

With the lawyer off the call, Graham ended the segment with a rant of his own, calling the changes "absolute and utter madness".

"I'm not going to mince my words here this is not to do with cyclists vs drivers or pedestrians vs cyclists, this is to do with road safety for everyone. And what these measures say to me is that there will be a lot more accidents, a lot more injuries, a lot more deaths on the road, and that is not really a very good idea, is it?"

For an in-depth look at the full changes which will come into effect from Saturday, check out our guide to the Department for Transport's proposal...