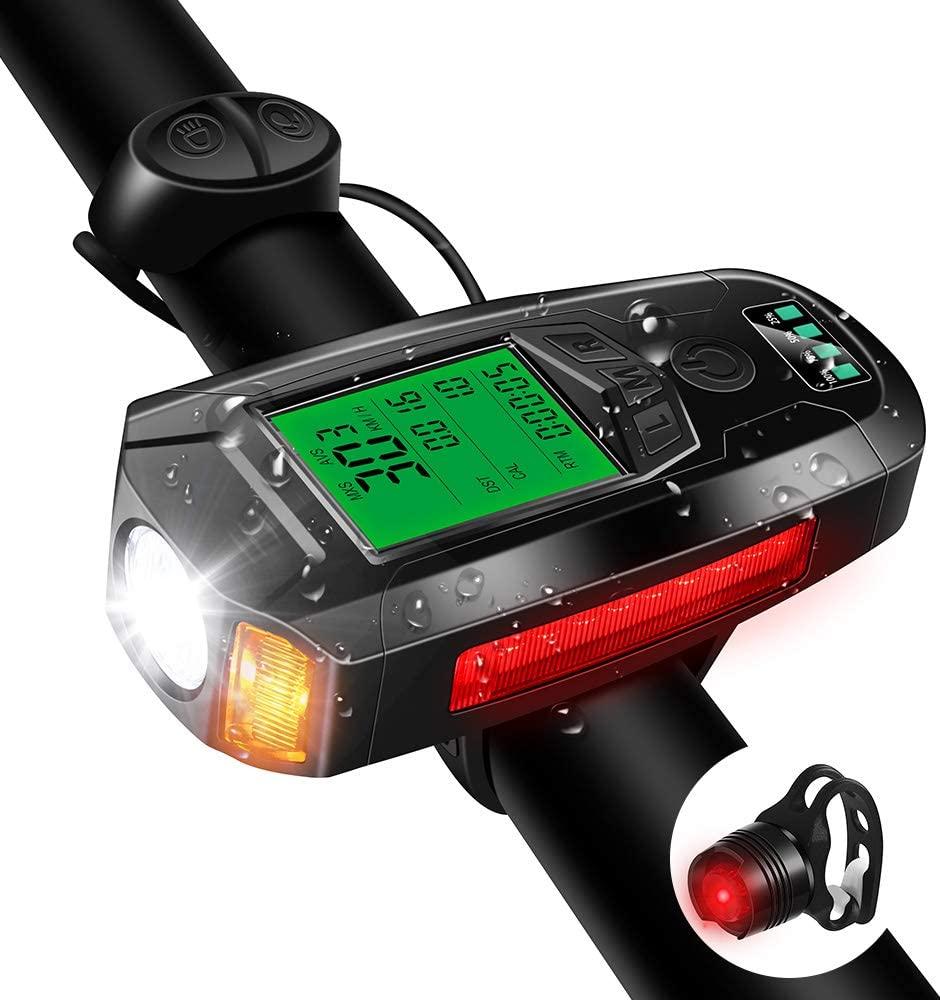 My partner bought me a bonkers bike light (plus computer, horn, anti-theft-alarm etc ... but sadly, no pizza cutter) for Christmas – here’s my brief review

What presents did your non-cycling family members get for you … ?
by Simon_MacMichael

In the darker months of the year at Casa MacMichael, a regular refrain is me moaning about losing bike lights, or that they have stopped charging, and it seems my partner was listening. Today, a belated Christmas present turned up at our flat, and it is an absolutely bonkers bike light. I love it.

When I say “bike light” … well, there is way more to it than that.

There is a 350-lumen front beam – ample for urban riding– and either side of that, a pair of orange “fog lights.” The manufacturers must know I’m in London … “It’s a real pea-souper tonight, guv, and no mistake.”

It also has a pair of red lights down the side … to increase visibility, according to the company, although I can’t quite work out who they might be.

According to the box, the light is “designed in Japan, assemble [sic] in China” – but other than what I suspect is an accommodation address in Tokyo, there is no clue there, nor in the (admittedly comprehensive) instruction leaflet of which brand might be behind it.

As I alluded to above, it’s a bit more than just a front light, though.

It has a built-in bike computer, with an LCD screen.

The computer isn’t wireless, and because I think the sensible place for me to mount the light is front basket cage of my Elephant Bike, and the cable doesn’t go that far, I’ll probably just stick to Strava via my phone.

But it also has a built-in, 130-decibel horn – something I could have done with in recent rides around west London.

Oh, and that doubles as an anti-theft warning alarm, as I discovered when I accidentally triggered it in the flat before I went out … five minutes later, after finding the instruction leaflet, I finally managed to disable it.

It sounded exactly like a smoke alarm, by the way … luckily, it seems none of the neighbours called out the London Fire Brigade.

The small package it came in was an absolute box of tricks … besides the light itself, there was a USB charging cable, of course, plus the wire, sensor and magnet to enable the computer side of things, another wire to connect to it with buttons on the handlebars that control the five light phases, plus the horn and, oh, there was also a separate rear light. And of course a few cable ties. And while I hated asking my partner how much it cost, it turns out it was a shade over twenty quid.

Admittedly, I’m the kind of cyclist who takes the whole ethos of being lit up like a Christmas tree to heart at this time of year … I have white fairy lights on the front basket, and red berry ones wrapped around the rear rack.

This thing, though, takes that idea of being lit up to a whole new level.

Is it something that someone working within the cycling industry and keeps abreast of all the product trends might have bought himself? Well, no.

Is it something that the partner of a cyclist who doesn’t cycle much herself * might have bought him as a solution to his lighting woes?

The only downside, as one of my colleagues pointed out when we were discussing it earlier, is that there is no integrated pizza cutter … maybe next year?

What cycling-related presents did you get from your non-cycling family and friends this year? Let us know in the comments …

* When I describe her as a “non-cyclist” … I should point out that she did do 50km and back out of Cambridge on the Reach Ride on a hire bicycle with me a couple of years back, so she’s not averse to jumping on a bike.