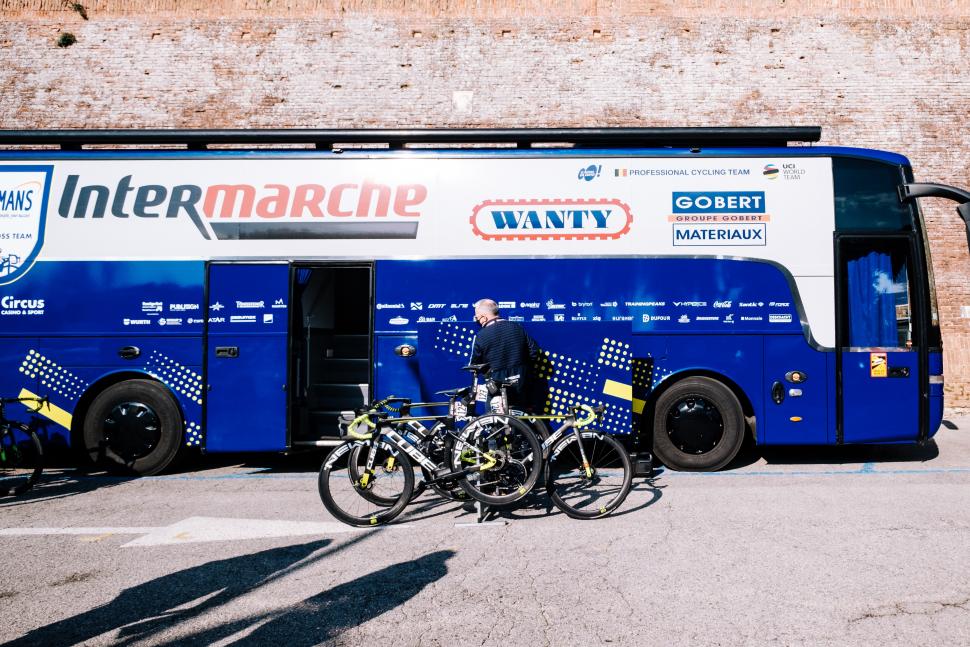 Guillaume Martin and... the Intermarché-Wanty-Gobert team bus drop out of Tour de France ahead of stage 9

Covid is not going away as the Tour de France enters its second rest day, and that wasn't the only thing leading to a DNS ahead of today's mountainous stage...
by Jack Sexty

With Wout Van Aert claiming another sensational victory on stage 8 of the Tour de France yesterday, cycling fans have been left hoping that none of the big names would be forced out by a positive Covid test ahead of today's stage... and while only Guillaume Martin of Cofidis fell victim to the virus, among the other dropouts were the Intermarché-Wanty-Gobert team bus, that failed due to gear problems during yesterday's journey to Lausanne.

After our team bus DNF, we called the camper to the rescue! We're good 👌 #TDF2022
📸 @PhotoNewsBe pic.twitter.com/vm0ejjaSWw

Fans offered their "thoughts and prayers" for the beleaguered bus, with the team holding their press conference and carrying on the onward journey to Aigle using their camper van instead.

If you were wondering if this would create a major spanner in the works for a World Tour cycling team, it appears not, with a spokesperson telling road.cc that the breakdown was "no big deal": "...we're well covered, we used the VIP camper for today. Our bus driver Johan flew to our service course yesterday to pick up our second bus," they said.

On the Covid front, hopes that this year's Tour would be the first since 2019 to be largely unaffected by the virus haven't materialised, with yesterday seeing the first riders dropping out of the race with Covid after UAE's Vegard Stake Laengen and AG2R- Citroën’s Geoffrey Bouchard returned positive results after Friday's stage.

It's not just riders either; The Cycling Podcast presenter Lionel Birnie, who travelled home from the Tour yesterday to attend his father's funeral, informed his Twitter followers that he had tested positive for Covid this morning.

The UCI said: "The UCI and its partners remind all participants in road races on the UCI International Calendar that the rules introduced over the last two years in the interests of everyone’s health and safety continue to apply. These include the obligation to wear a mask, to maintain sufficient physical distance and to disinfect hands frequently."

Will coronavirus have a major influence over who wins the jerseys at this year's Tour? Many eyes will be on the current overall leader Tadej Pogacar, and should he win today's stage as the race returns to France some might be hoping he doesn't dish out quite so many high fives to his adoring public in celebration...