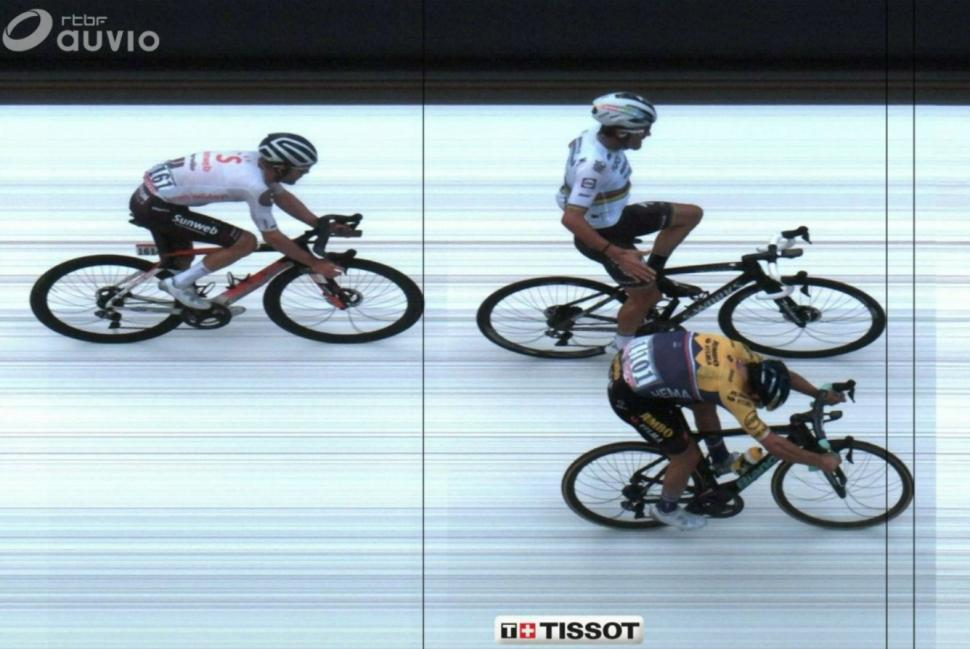 Liege-Bastogne-Liege: Roglic snatches win as Alaphilippe celebrates too early – and then gets relegated to fifth (+ video)

An astonishing end to Liege-Bastogne-Liege today saw Primoz Roglic snatch victory from Julian Alaphilippe as the latter, riding his first race in the rainbow jersey of world champion, raised his arms in celebration too early and then found himself relegated for cutting across Marc Hirschi in the sprint. Meanwhile, Lizzie Deignan is back in the lead of the UCI Women’s WorldTour after winning the women’s race, while Diego Ulissi won Stage 2 of the Giro d’Italia.

Deceuninck-Quick Step’s Alaphilippe and Jumbo-Visma rider Roglic were in a select quartet contesting the closing stages of the oldest of cycling’s five Monuments, together with Marc Hirschi of Trek-Segafredo and Tour de France champion Tadej Pogacar of UAE Team Emirates. They were joined in the closing few hundred metres by Bahrain-Merida’s Matej Mohoric, who opened up the sprint.

Alaphilippe seemed to have won and began celebrating early, but Roglic, throwing his bike at the line, pipped him to the victory by a matter of centimetres.

The world champion’s subsequent relegation was due to him veering sharply to his right to cut across Hirschi’s line metres short of the line, the Swiss rider somehow managing to stay upright and Pogacar also losing his momentum.

As a result, the day’s podium featured three riders who also took to the stage in Paris a fortnight ago at the end of the Tour de France, where Roglic had finished runner-up to Pogacar and Hirschi took the super-combativity award. And with Mohoric moving up to fourth, it also gave Slovenia three riders in the top four today.

Earlier in the race, CCC’s Greg Van Avermaet, Jay McCarthy of Bora-Hansgrohe and Mitchelton-Scott’s Adam Yates all crashed out, the incident caused when they hit a road sign on a traffic island that had no marshal positioned there to warn of the danger.

Deignan’s victory, meanwhile, continues a strong run of form since racing resumed in late July, with the rider from Yorkshire’s recent results including the GP de Plouay and La Course by Le Tour de France.

Her team-mate Ellen van Dijk, who had helped set up Deignan’s victory was third, with Mitchelton-Scott’s Grace Brown separating the two Trek-Segafredo riders after finishing in second place.

“I just felt the moment, and I think that comes from having confidence of being in this team and having directors who allow us to race on instinct,” said Deignan afterwards.

“The nicest thing about this team is that we're allowed to race on instinct and not to fear failure. It was Ellen who said to me: 'Lizzie, you have to go on La Redoute' and I did, and didn't look back, and I just won.”

Deignan, who said that she knew she had won in the last 500 metres, added: “It was really close, Grace Brown was coming up really hot behind me, and I knew how good of a time trialist she is, and I was getting more and more legless.

“In the end, I started to try and chase the motorbikes in front of me rather than think about her behind me because mentally, it cracks you if you think like that.”