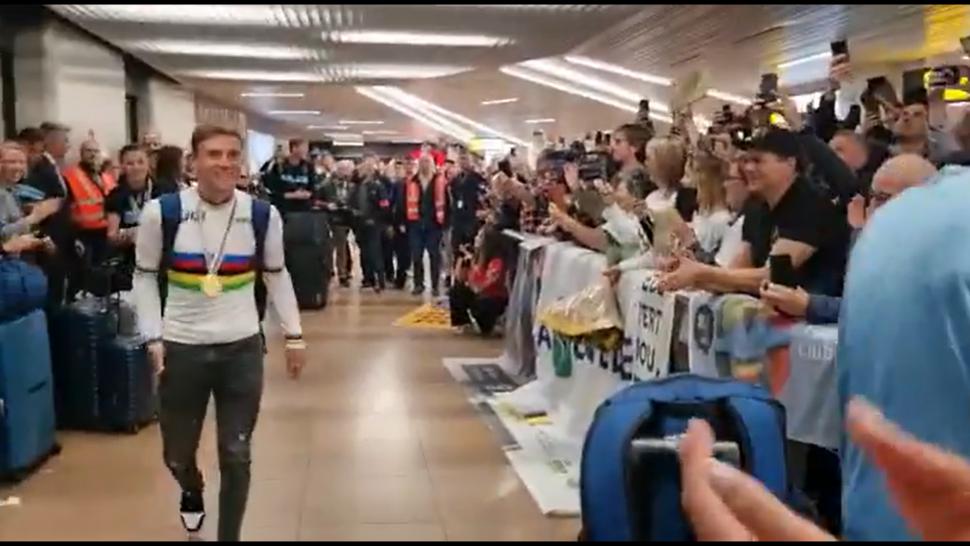 The new king of Belgium...
by Dan Alexander

This is what happens when you bring the rainbow jersey home to one of the most cycling-obsessed nations in the world...

Huge crowds greeted returning hero Remco Evenepoel at the airport in Brussels this lunchtime, creating scenes more akin to a multi-million pound footballer arriving to sign a lucrative contract or a pop star jetting in for a headline tour.

Belgian media reports hundreds of fans turned out to watch the 22-year-old stroll through arrivals in his rainbow bands, gold medal hanging from his neck.

Sporza reports there were cheers, songs and applause for the new hero of Belgian cycling (if he wasn't already after the Vuelta) as he greeted his family

> Remco Evenepoel's 2022 Vuelta winning bike: a closer look at the Specialized Tarmac SL7 that he propelled to victory

Six of the eight-man Belgian team, and women's team and staff, arrived on the same flight as Evenepoel and posed for pictures. Wout van Aert and Jasper Stuyven were the only absentees by the look of things, presumably just flying to a different location.

"It is fantastic to see the great interest," Evenepoel's father Patrick said. "Apparently it triggers something with people. Do I have my voice back yet? Gradually, yes. I'm especially happy to see my child again, not the cyclist. Most parents know what that means.

No rest for the world champ though..."Tonight he has to go find his wedding suit," Patrick laughed. "Then we will catch up and then some training has to be done. Next week, Evenepoel will ride in Binche. He absolutely wanted to be there for Iljo Keisse and Philippe Gilbert. They are also champions."