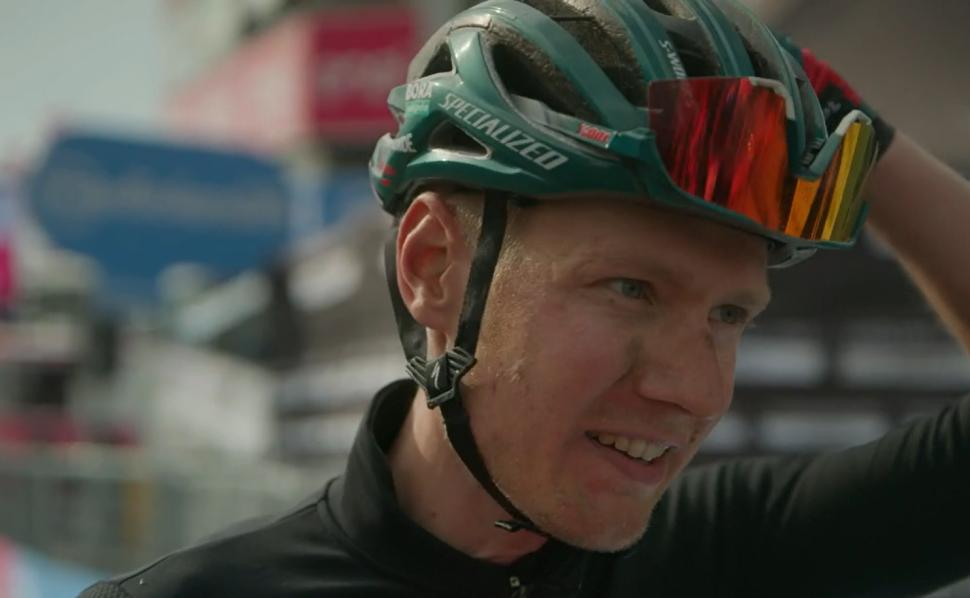 Wilco Kelderman said his 10-minute time loss began with two stops after breaking a spoke on a descent, something the Dutchman attributes to his disc brakes overheating
by Dan Alexander

Along with Simon Yates, Wilco Kelderman's general classification hopes all but disappeared on stage nine of the Giro d'Italia, however, unlike Yates, the Bora-Hansgrohe rider has some gripes about his equipment letting him down — specifically, his disc brakes...

Kelderman, who finished on the podium at the Giro in 2020 when Tao Geoghegan Hart won the race, twice stopped on the descent of the first-category Passo Lanciano, an enforced stoppage he said afterwards was due to a broken spoke.

"It's just shit," he said. "On the descent of the penultimate climb I broke a spoke from my wheel. I think disc brakes get very hot and those spokes then get warm.

"They collapsed because of the pressure, it was a very fast descent. I had to change bikes twice and I was already exhausted before the climb started. Then I knew it wasn't going to work anymore. I also had some back pain, so it wasn't my day.

"The Giro is not over yet. Maybe I can still go for a stage win. The preparation was just not good. You hope it's good enough, but you know it's going to be hard. That's too bad."

The stage was won by Bora-Hansgrohe teammate Jai Hindley, who finished second the year Geoghegan Hart won the maglia rosa — back when the pair both rode for the team then racing under the Sunweb banner.

Froome's most recent comments came via YouTube in a follow up to a video he posted last year, in which he said, "I don't think the technology is quite where it needs to be" and mentioned concerns about over rubbing, overheating and the potential for rotors to wrap.

"My entertainment with disc brakes continues. I think they're sort of work in progress. I think the technology is improving but the margins are so slim. You do a big descent and the alignment moves completely so I need to stop and readjust everything again," the Israel - Premier Tech rider said in March.

"No matter how many mechanics I’ve spoken to or taken the bike to, you just can't get 100 per cent on top of that. [You] always… start getting a few issues as soon as you start doing some some really big descents.

"But c’est la vie, for the time being. Just put the earphones in and pretend I can't hear it."