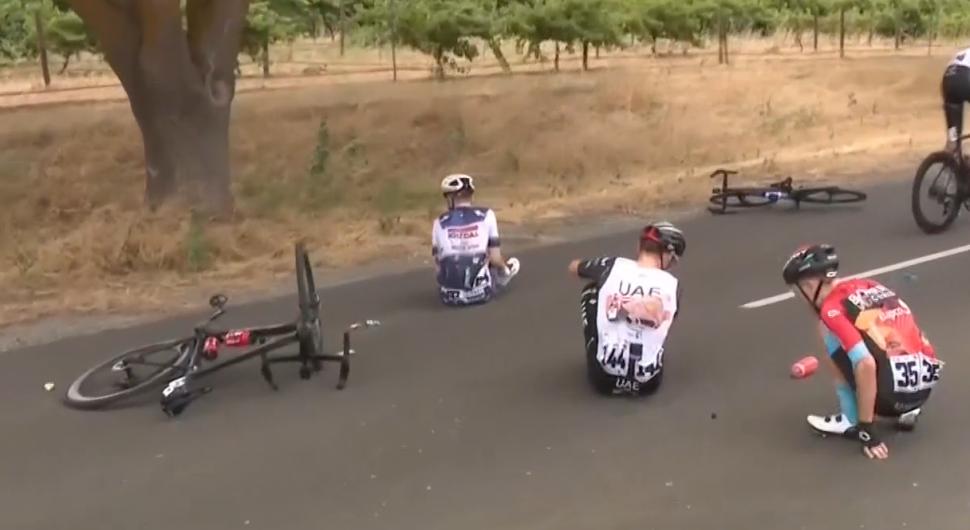 Several pro riders have sprung to the Brit's defence, arguing the decision will encourage others to skip necessary safety checks...
by Dan Alexander

James Knox has released a statement explaining the circumstances that led to him being disqualified from the Tour Down Under on yesterday's opening road stage, and argued commissaires "should not punish riders for staying behind after a crash to be properly evaluated".

The British rider on the Soudal-QuickStep team was kicked off the race having drafted his team's cars to return to the peloton after his heavy fall with around 55km to go of stage one.

Knox had been careful to undergo a concussion check with a doctor having hit his head in the fall, and shared photos of the visible damage to his helmet.

Ineos Grenadiers' Luke Rowe and Tao Geoghegan Hart, as well as Oliver Naesen are just three of the riders who have defended Knox, Rowe saying the ruling was "very dangerous" if it will encourage others to skip concussion checks, while Naesen called it a "joke".

Penning a lengthy statement on Twitter, Knox explained he needed a medical assessment from his team doctor to "make sure that no bones were broken and more importantly, that I was not concussed."

"After remounting, I realised my handlebar was broken and needed to stop again to change onto my spare bike," he recalled. "The race situation was settled after the intermediate sprint, but the commissaire refused to let me stay behind the car for more than a couple of kilometres. The exact reasons for this I'm not exactly sure.

"My only ambition was to rejoin the back of the convoy, or at minimum to the other crashed riders ahead of me, hoping to continue in a race I've travelled around the world to partake in and still has four days remaining.

"I watched from behind as other crashed riders were allowed to stay behind their cars to rejoin the race, as you would expect. I have to accept my own responsibility for the mistakes I made after this.

"On my own with no information given about time gaps or time cuts I took some draft from a couple of soigneur cars, who were leaving the final feed, for a few kilometres. I was seen doing so and disqualified for this.

"It seems clear to me if cycling is going to take serious steps in maintaining rider welfare, commissaires should not punish riders for staying behind after a crash to be properly evaluated.

"The actions they took in the aftermath of the crash clearly demonstrated to me that I would have been better off immediately remounting without undergoing a proper examination. The rules for returning to the convoy are very tricky but I feel like this was a clear-cut example that I wasn't trying to use the cars for an advantage, nor would I have been in that situation without crashing."

Such a joke... Proper examining takes some time. When given a green light to start again, you should at least be allowed to be brought back to the last group. By drafting and without hanging on the car obviously.
Shame they DQ'd you for this, at the other side of the world..

So what the UCI are saying here is very dangerous! If you crash get straight back on your bike without getting checked out, otherwise your potentially out the race. Instead of ‘get checked out properly, do the protocols, then recieve aid to get back to the peleton’ #sockheight https://t.co/By9b67O52X

Geoghegan Hart added: "Why is the UCI actively endangering rider safety by not allowing time to asses a rider after a crash? If you can't use the convoy you are forced to forgo any concussion assessment or other medical tests... For what sporting gain?"

The race continued, without Knox, today — Rohan Dennis of Jumbo Visma winning the second stage ahead of Jay Vine, Mauro Schmid, Simon Yates and Jai Hindley who all gained a few seconds on the riders in the peloton led home by Caleb Ewan.

Race leader Alberto Bettiol cramped badly and dropped out of the leader's jersey which is now held by Dennis, two seconds ahead of Vine.