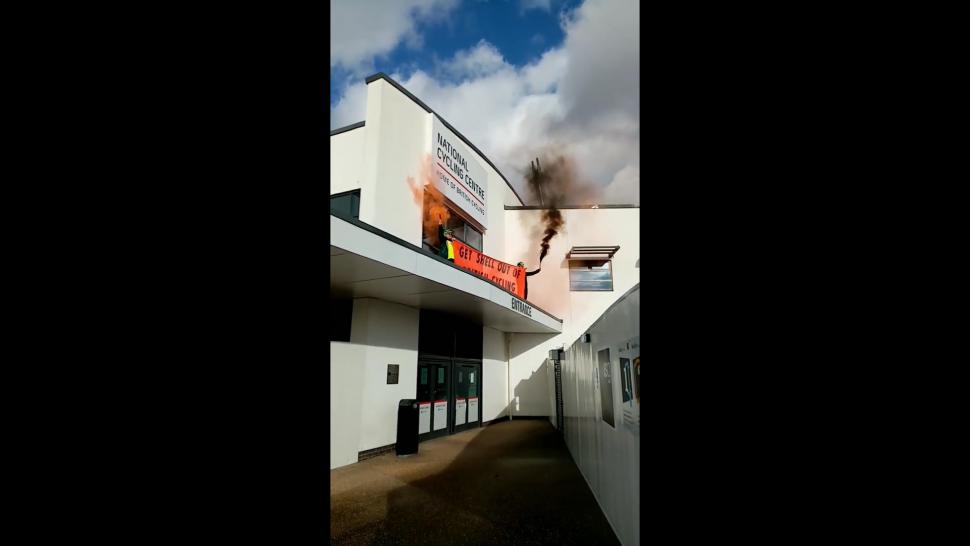 Two protesters were filmed displaying a 'Get Shell out of British Cycling' banner at the National Cycling Centre in Manchester...
by Dan Alexander

Extinction Rebellion protesters have climbed onto the entrance of the National Cycling Centre in Manchester to protest British Cycling's partnership with Shell.

Two protesters displayed a banner demanding 'Get Shell out of British Cycling' and held smoke bomb-like devices. The video was filmed by Extinction Rebellion Midlands and uploaded to Twitter.

Protest in Manchester to Get the Shell out of @BritishCycling pic.twitter.com/0oHh4efaeT

Earlier this week Extinction Rebellion Midlands accused the governing body of "taking their AGM online" due to the "likelihood of vocal opposition" to the partnership with oil and gas giants Shell.

The protest group also advertised a Critical Mass Ride which was held this morning in Birmingham to demand Shell get "out of British Cycling".

road.cc has contacted British Cycling and Extinction Rebellion for comment.

Note: We are NOT against British Cycling – many of us are keen cyclists and all of us treasure cycling as a key component of clean transport BUT, GETTING IN BED WITH SHELL IS NOT OK pic.twitter.com/794FOcewGu

Last month, British Cycling's announcement of Shell as a new partner on a deal that runs until 2030 attracted widespread accusations of "greenwashing".

There was outrage at the deal, with many now-former members telling us they would not continue to financially support the governing body because of the partnership.

One British Cycling member, a trained ride leader for the organisation's Breeze women-only rides, said that the energy company "stands for everything we everyday cyclists don't" while another who has belonged to the organisation for more than a quarter of a century said that the sponsorship was "greenwashing for them [Shell UK], plain and simple."

At the time then-CEO Brian Facer, who has since stepped away from his role "by mutual agreement", said the deal would help "widen access to the sport, support our elite riders and help our organisation and sport take important steps towards net zero".

However, many were unconvinced and highlighted the fact oil and gas still accounts for the vast majority of Shell's profits, with 'Renewables and energy solutions' making up just 6.3 per cent of the company's earnings for the second quarter of 2022 as it announced record $11.5bn (£9.4bn) profits.