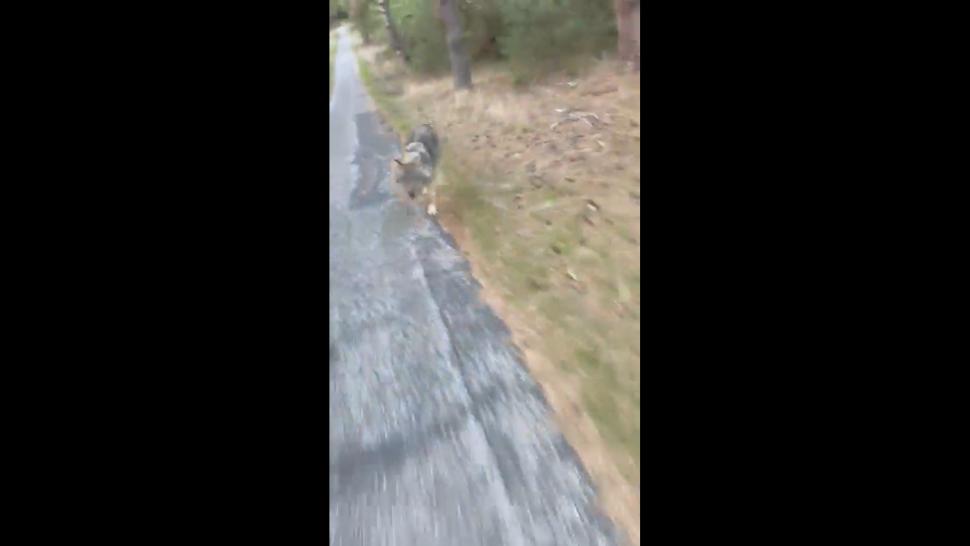 "This could be fatal": Dutch cyclists terrorised by "curious" wolves in popular national park

Officials have been granted permission to shoot the "problem animals" with paintballs to make them less tame...
by Dan Alexander

Authorities scrambled to find a solution after numerous reports of cyclists in one of the Netherlands' national parks being chased by wolves that have become unafraid of humans.

Experts believe the animals — around 20 of which now inhabit Veluwe following reintroduction in 2019 — might have eaten food left close to hiking trails and now associate humans with getting an easy meal.

Officials at the Hoge Veluwe National Park have been granted permission to shoot the animals with paintballs in a bid to make them less tame after multiple videos appeared on social media of cyclists and other park visitors being approached or chased.

In the most alarming clip a cyclist riding a road bike begins recording as a wolf darts across the cycle route in the distance before disappearing back into the trees — only to then rush the accelerating rider and chase him for a few seconds.

In another video a wolf crosses a path metres away from a family on a bike ride at the national park.

An expert from the Institute for Nature and Forest Research believes the reports involve "at least one young wolf" that "shows an interest in people".

Joachim Mergaey told VRT: "It is clearly a problem wolf that needs to be deterred as soon as possible. The most important thing is to stun the wolf first of all and put on a GPS tracker so that it can be tracked. Then you have to actively chase the animal so that it can return to normal again."

He does not believe, however, that the wolf had any intention of attacking the cyclist who "would not have had a chance" if it had.

"In that case, the film would have ended very differently. A wolf can go up to 60 kilometers per hour, the cyclist would not have had a chance. You can clearly see that the wolf is leisurely walking behind the cyclist, probably just out of curiosity," he continued.

"In De Hoge Veluwe Park, food remains are said to have been found close to the hiking trails that were probably left as food for wolves. Wolves are naturally afraid of people, but by feeding them, they start to associate people with something positive. So it is possible that a wolf starts looking for people and that is clearly the case with this wolf.

"There are now about 20,000 wolves in Europe and in the past 20 years there have been barely three incidents in which a person was attacked and bitten by a wolf. In each case it was a wolf that was fed by humans or that was captured as a puppy to tame it.

"Those wolves have gotten used to being fed, and if they don't, they might bite out of frustration. In all three cases, it wasn't an attack to kill."

"This could be fatal"

However, another rider also reported being chased by three wolves during a recent cycling trip to the national park, suggesting his encounter was different to other videos of wolf encounters and could have been "fatal".

Berkay Sahin says his girlfriend, who he did not want to name for privacy reasons, "has sleepless nights" after the pair were "confronted" by a wolf "in a stealth position with his head down" as they tried to find the right park exit as it started to get dark.

"He was four or five meters away. My girlfriend was completely panicked. I thought: 'He wants to confront. He doesn't want to leave at all'," the cyclist told GLD.

Having escaped by "stomping and waving the bike" with just grazes from stumbling as they hurried off, Mr Sahin and his girlfriend say they were then chased by three more wolves.

"With my bike I couldn't resist three wolves," he continued. "I shone their eyes with the flashlight of his phone. After a few seconds, they reduced their speed. Eventually they stopped.

"She still has sleepless nights about it. It was bizarre: you are not attacked by a pack of wild wolves every day. Imagine if we had a small child with us, completely panicked. Perhaps it would have ended fatally."

Park rangers are now expected to shoot the animals with paintballs in a bid to make them less confident around humans. Paintballs were chosen so the rangers know which animals have been shot and can monitor the response.

Environmental organisation De Faunabescherming believes park officials have been deliberately feeding the wolves in the hope they become too tame, are deemed "problem animals" and culled.

"Because there is no other plausible explanation for the unnatural behaviour of the wolf in the Hoge Veluwe, the land owner must be held responsible for this," Niko Koffeman, the group's chairman told Dutch news outlet NOS.

The park's owner Seger Emmanuel baron van Voorst tot Voorst was an outspoken critic of the plan to reintroduce wolves to the Netherlands but denies the allegations.