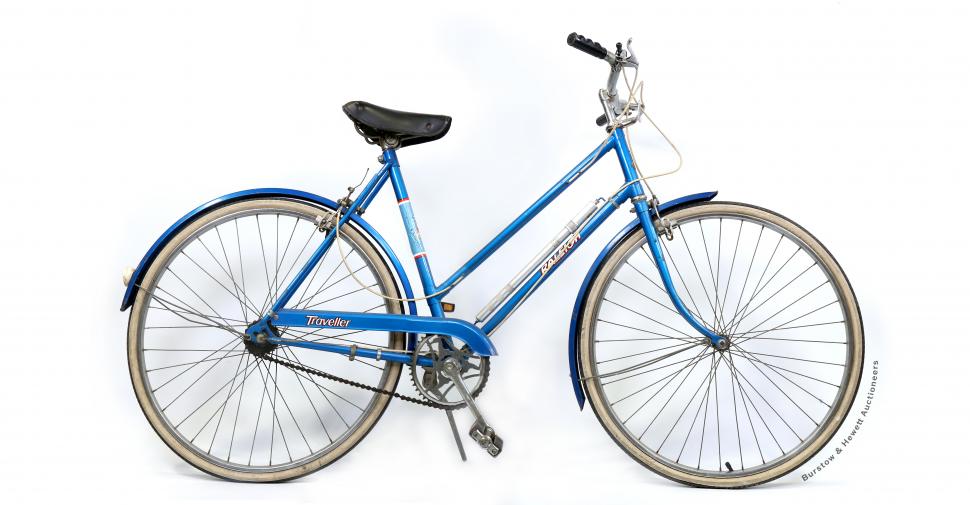 “Racist roots”: Buyer of Princess Diana’s ‘shame bike’ will use it to highlight Royal Family’s colonial past

Baltimore attorney who bid £44,000 for the Raleigh Traveller last week will make it centre of anti-slavery memorial
by Simon_MacMichael

The successful bidder at an auction last week of a Raleigh bicycle once owned by the late Diana, Princess of Wales that was dubbed her 'shame bike' by the tabloid press bought it so he can put it on display to highlight “the British Royal Family’s basic racist roots," he has told road.cc.

Barry Glazer, a prominent attorney in Baltimore, Maryland, bid £44,000 – more than twice the top end of the estimate – for the blue Raleigh bicycle when it was auctioned by Burstow & Hewett Auctioneers in Battle, East Sussex last week.

According to an invoice seen by road.cc raised to Mr Glazer by the auction house – which has not disclosed the identity of the winning bidder – the buyer’s premium plus surcharge and VAT takes the total amount to £57,200.

In a statement, his firm The Law Office of Barry R Glazer LLC told road.cc that he “will be setting up a memorial dedicated to the British Royal Family’s basic racist roots.

“The memorial will be set up in an enclave in his office located in a historic building, utilised by the underground ‘railroad’ to assist slaves to freedom in Baltimore.”

African slaves were first brought to St Mary’s City, the first English settlement in what is now Maryland, in 1642 to work on tobacco plantations.

In the following century, by which time the British throne was held by the House of Hanover,  slavery continued to be supported by the Crown in what were then the Colonies until the Revolutionary War, which resulted in the independence of the United States.

The ‘underground railroad’ – a network of safe routes typically using Native American trails and inland waterways – was established in the early to mid-19th Century to enable enslaved African-Americans, often assisted by white abolitionists, to escape to free states as well as Canada.

One key route passed through Baltimore, which was also the city where the first blood was spilt in the American Civil War when troops from Massachusetts were fired on by civilians in the city on 19 April 1861.

Burstow & Hewett had expected Princess Diana’s former bike to fetch between £15,000 and £20,000 when it went under the hammer last Wednesday, saying it represented “a famous symbol of Diana’s oppression.”

As Lady Diana Spencer, she used the bike to commute from her home in Coleherne Court, west London, to the Pimlico nursery where she was working at the time her engagement to Prince Charles was announced.

But members of the royal household told her it was not a suitable form of transport for a future member of the Royal Family, and she reluctantly passed it on to a family friend, leading the press to dub it her “shame bike.”

The auctioneers cited increased interest in royal memorabilia following the success of the Netflix series The Crown, and also said that the treatment of the Duchess of Sussex – married to Princess Diana’s second son, Prince Harry – had also heightened interest in it.

Referring to the recent interview by Oprah Winfrey with the Duke and Duchess of Sussex, Mr Glazer’s firm said: “The memorial is particularly relevant now considering the present controversy with Harry and Meghan accusing their Royal Family of racism.”

According to the firm’s statement: “Mr Glazer is particularly disturbed by the fact that major US broadcasting stations televised the funeral of Prince Phillip for several hours, an honour usually reserved for US presidents.

“He explained that the Royal Family’s claim for superiority is rooted in the logic of white supremacy,” it continued.

A practising attorney since 1968, Mr Glazer’s TV advertisements, in which he holds himself out as a “Legal advocate for the injured, disabled, and urinated upon” have, according to this 2011 article, made him “something of a legend in the Baltimore area, and not without good reason.”