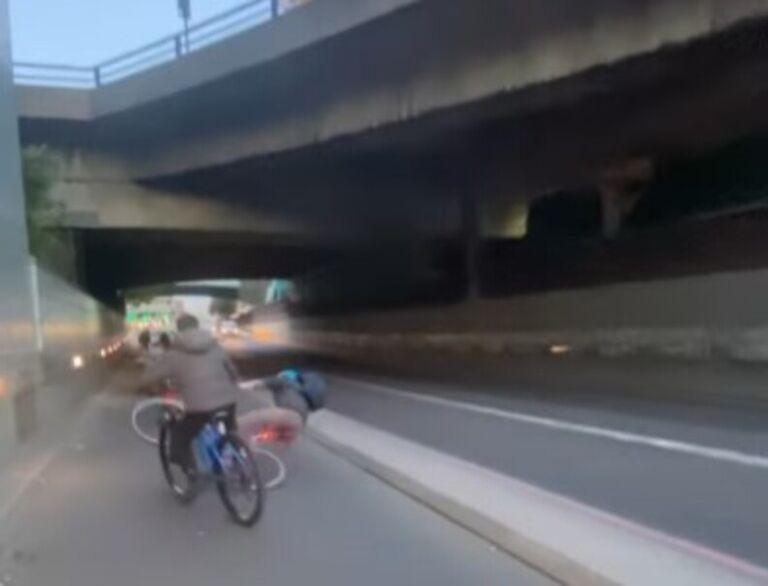 "Karma at its finest": Impatient cyclist tries to push another popping a wheelie out of the way... and lands flat on his face

Whatever your thoughts on groups of youths using cycle lanes to pull stunts, this is definitely not how to attempt an overtake
by Jack Sexty

A London cyclist who tried to shove another wheelie-popping rider out of the way as he attempted to overtake got what many are describing as "instant karma", as the wheelie cyclist managed to keep his balance and the one on two wheels came off rather worse...

Shared on Instagram by oneway.bradd, a disagreement of some sort can be heard when the footage begins, before the wheelie cyclist strays into the path of an overtaking rider, wearing a blue helmet and on a hybrid bike.

While it's not clear what happened in the build-up – and it's not clear if the wheelie cyclist was aware of the approaching cyclist behind him – what happened next is probably a lesson to us all in how to ride calmly and patiently when using segregated cycling infrastructure.

Amongst the insults and analyses with frutier language than we'd care to share in this article, one of the more measured commenters said: "This person doing the wheelie would be annoying for sure but there’s no need to turn aggressive on him. People are so aggressive these days, motorists and cyclists alike. There’s no need for such behaviour."

Replying to criticism of his riding and accusations he was "blocking the lane", the wheelie-popping cyclist who was shoved, who goes by the name jrzy_nojus on Instagram, said: "That made no sense I didn’t ride in front of him I turned and he pushed me."

Youngsters pulling stunts on bikes in urban areas isn't a new thing, and has on some occasions caused mini spates of moral panic, but in recent years the riding of mostly urban and BMX bikes en masse has started to gain some further traction, and has even been encouraged by the Met Police in London.

Responding to anti-social behaviour complaints about youths 'bike storming' and skating in the Square Mile last year, the Met said youths are welcome to practise their hobbies in this "relatively safe environment".

The Bikestormz event – an annual mass ride in London where riders have been shown weaving in and out of traffic with thousands taking part – has gained the support of London's mayor Sadiq Khan and the Met in the past, and in part is meant as a protest against knife crime.