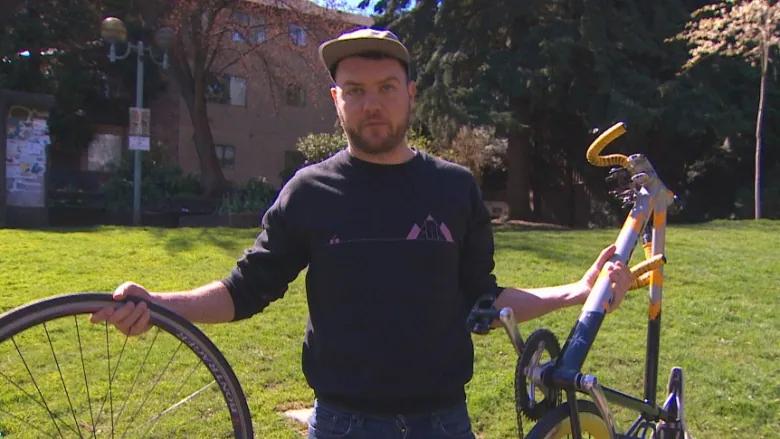 Vancouver cyclist struck by motorist has to pay damages (CBC)

Cyclist suffers broken arm after being struck by motorist who drove through stop sign – then has to pay $3,700 to repair damages to car

Ben Bolliger, who was adjudged to be equally at fault for the collision, says his case highlights the flaws and anti-cycling bias in British Columbia’s no-fault insurance system
by Ryan Mallon

A Canadian cyclist who was struck by a law-breaking motorist, leaving him in hospital, has been handed a $3,700 bill from the provincial vehicle insurer to repair the bonnet and windscreen of the driver’s car.

Vancouver resident Ben Bolliger said that he was cycling to get lunch in the city last summer when a motorist, driving a Mercedes-Benz, drove through a stop sign and struck him, breaking his arm and snapping his bike in two.

“I may have entered the intersection going maybe five kilometres an hour and I was thrown 14 metres,” Bolliger told CBC. “They removed many pieces of windshield from my back. I think in the end I received close to 97 sutures and staples.”

However, when the incident was assessed by the Insurance Corporation of British Columbia (ICBC), Bolliger was found to be 50 percent at fault for the collision. The cyclist was then told he had to pay almost $4,000 to fix the damage to the car.

This last July I got hit by a car while biking to pick up lunch by a driver who ran a stop sign on a bike route. Last week @ICBC sent me a $$3700 bill for repairs to the guys hood and windshield. pic.twitter.com/2MToIrGM5z

Introduced in May 2021, the new system removed the right of an individual to sue for personal injuries and vehicle damage caused by a motor vehicle accident in British Columbia “in all but very limited circumstances”.

ICBC promised the new scheme would save the average motorist $400 a year in premiums, while also redirecting money formerly spent on legal costs to benefit those injured in crashes.

The corporation told CBC that investigators review all evidence before reaching a decision and that in claims involving conflicting accounts or insufficient evidence “responsibility for the crash may be split”. Decisions can then be appealed through the civil resolution process.

However, Bolliger said: “They are treating my bike as if it's an uninsured vehicle... just as they would a car, which in my mind is bonkers.

“And under this new no-fault insurance regime — which seems comical at this point — there is really no or very little recourse for cyclists.”

Another cyclist in Vancouver, Alecia Sharp, was struck by a motorist who she says jumped a red light at the junction of a major bike route in the city.

However, ICBC told her that she was 100 percent at fault for the crash because she entered the junction from a stop sign, though she will not have to pay for any damage.

A specialist cycling lawyer says that the two cases underline the lack of fairness in the ICBC’s new system, and called on local bike riders to wear helmet or body cameras so they can provide clear evidence in the result of a crash.

“After [the introduction of] no-fault, the ability to challenge any decision that ICBC makes, including liability, was removed or severely restricted,” said David Hay. “Under the old system, you could retain counsel to create some leverage... In the new world, you can't pursue damages.”

HUB spokesperson Jeff Leigh said: “It's very outdated and doesn't do much for people walking or people cycling. A specific vulnerable road user law would be a big step forward.”