Comedian Rob Beckett says he has 'never seen a cyclist smile';15mph speed limit to be introduced in City of London next year; Police officers conduct patrols on bicycle due to lack of fuel; Hundreds of cyclists rave in tunnel + more on the live blog

Will Bolton is back on the blog again today... 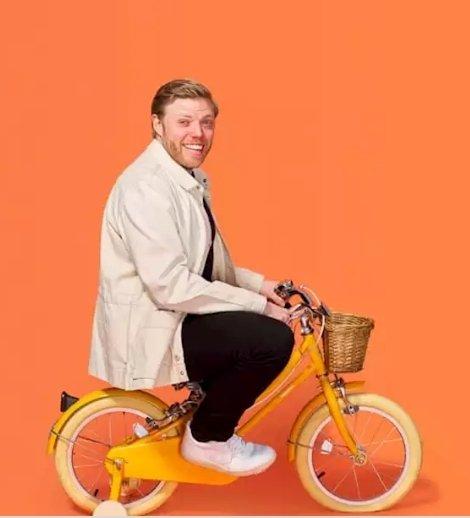 One of the big stories on road.cc over the last couple of days was the tale of the Fair Fuel UK boss having his house marked as a petrol staion on Google Maps - allegedly by who he described as 'Militant cyclists'.

The ​head of Fair Fuel UK, which lobbies the government over fuel duty, says he has been inundated with calls from panic-buying drivers after an unknown person listed his home as a petrol station on Google Maps.

After reading the story, one road.cc reader commented: "Perhaps he should have bought some  fuel and given it away to needy folk who arrived at his house....that would have been the charitable thing to do...or bought fuel and sold it a high mark up to fund his lobbying."

Philip Cower also offered his opinion: "I think we should say his address is a highly successful coffee shop.

"Imagine his face when about 30 cycles rock up all at once."

The City of London is planning to introduce a blanket 15mph speed limit to 'save lives', according to a planning document due to be discussed in a transport committee next month.

Bruce McVean, acting assistant director of transportation at the City of London Corporation, said: “A request for in principle support for a 15mph speed limit will shortly be submitted to the Secretary of State for Transport.

“If this is agreed, we will begin work on an experimental traffic order (ETO) to introduce a City-wide 15mph limit, with the aim of having this in place before the end of 2022.”

“Through the Transport Strategy we have committed to eliminate death and serious injuries on the City’s streets by 2040."

As well as introducing a 15mph speed limit the City of London also aims to widen pavements in a “Pedestrian Priority Programme” that will “give more priority to people walking.”

There will also be an expanded cycle network with links from Aldgate to the protected cycleway on the Thames Embankment, Forbes report.

The City of London previously planned to introduce a 15mph speed limit in 2019. At the time, AA president Edmund King said it would not make much difference because motor traffic in the Square Mile has “moved no faster than a horse and cart for 100 years anyway.”

Indeed, as the author of the latest article, Carlton Reid, pointed out, 15mph is actually about double the speed most vehicles travel at in London. 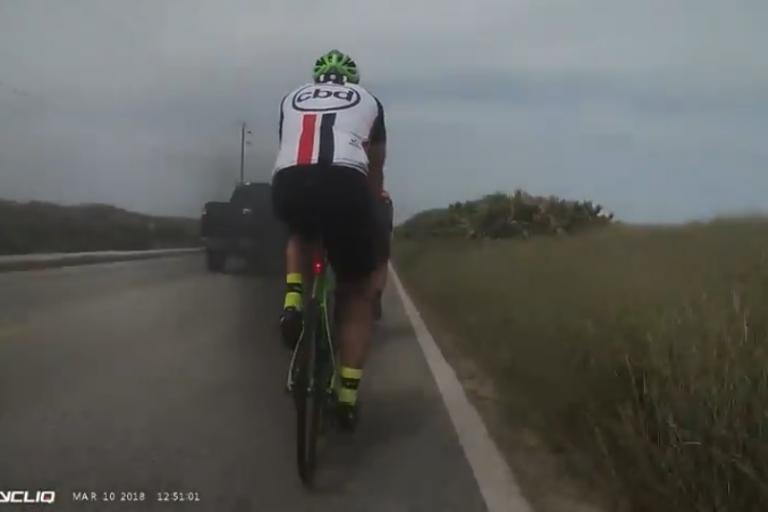 Social media users ask why no arrest made; crowdfunder launched to pay victims’ medical bills
16
28 September 2021, 12:28
Cyclist killed in hit-and-run on the edge of the Surrey Hills.

Police are appealing for witnesses after a cyclist was killed in a suspected hit-and-run crash on the edge of the Surrey Hills.

It happened in Horsham Road, Cranleigh, at 18:05 BST on Monday, when the rider was struck by a white vehicle which failed to stop.

The cyclist was treated by paramedics but pronounced dead shortly afterwards. His next of kin have been informed.

Police are searching for the driver and have appealed to any witnesses or people with dashcam footage to get in touch.

A brainteaser, created by Fletchers Solicitors, shows a bustling town.

Hidden amongst pedestrians, as well as those travelling by car and van, are ten cyclists or motorcyclists to spot.

The bike injury specialists have released this challenging brainteaser to highlight the importance of drivers being aware of cyclists on the road.

The law firm has also revealed some of the top locations that put motorcyclists and cyclists at risk of accidents, which have been worked into the brainteaser to educate drivers and cyclists. Drum & Bass On The Bike was out on the streets of London this weekend with hundreds of cyclists turning up.

Hundreds of Cyclists Rave in a tunnel in The City of London. @domwhiting pic.twitter.com/FEJpDUbDQt

28 September 2021, 10:20
Jasper Stuyven gets 'chocolate medal' after missing out at World Championships

Jasper Stuyven's uncle has made him a chocolate medal after the Belgian rider finished just outside of the podium at the World Championships.

His uncle Ivan, who runs a chocolate workshop with Stuyven, posted on Instagram after the race showing the detailed design.

He said: "Now we have the chocolate medal [for] ourselves.

"Such a shame, but still so proud."

Comedian Rob Beckett has come under fire after he posted a Tweet claiming he has ‘never seen a cyclist smile’.

He was immediately challenged by lots of cyclists who pointed out if riders didn’t look happy on the roads it was probably because they had just narrowly avoided being wiped out by an SUV.

While some questioned whether the Tweet was meant to be ironic, one man, Dave Walker, commented: “Hi Rob. We’re quite a happy bunch really. But around town look serious as we’re concentrating on not being hit by a wayward driver.”

Another, Chris Day, said: “Hi Rob, 99 per cent of the time I'm riding my bike I'm really happy - I'm getting fresh air, endorphins, it's keeping me slim and healthy, plus I'm saving a shedload of money. The 1 per cent I'm not happy is when I get cut up or close passed by angry, impatient motorists. I hope this helps.”

Cyclists also flooded the thread with lots of photographs of happy, smiling people on bikes - including a nice one of Beckett himself.

28 September 2021, 09:12
Author Tim Moore able to see the funny side of negative comments about latest book

Cycling author Tim Moore was able to see the funny side of some rather negative comments left below the road.cc review of his latest book.

Clearly, this road.cc reader was not a fan of Moore, or his style of writing, and said he thought he was a 'w*****r of the highest order'.

The author's latest book, Vuelta Skelter, is out now and details the exploits of Julián Berrendero in the 1941 Spanish Tour alongside Moor's own re-tracing of the route.

I'm a winner of the highest order! pic.twitter.com/EZYmgxoGIR

CCTV released by North Yorkshire police shows how easy it is for thieves to cut through cheap bicycle locks - even in broad daylight.

This theft took place in Lendal, York, at 2.45pm on 14 August. The bike stolen was a Carrera Vengeance electric bike, which is grey with red stripes.

PC Jamie Gibson said:  “The victim has secured their bike to a cycle rack with a lock, however the lock is cut and the bike is stolen within seconds.

“The CCTV footage demonstrate how thieves can quickly steal a cycle which has a cheap or poor lock. To help deter opportunistic criminals, we strongly recommend using an approved locking device.”

Welsh pro cyclist Owain Doull has announced he will join EF Education-Nippo from next season.

The 28-year-old said: "I always like doing my part for the team and that’s one of the things I find so attractive about joining EF. There’s a mixture of opportunities I’ll have and I’ll be able to explore my limits more.”

He added: “The Classics will be a big goal. Obviously the team has a great pedigree in the guys they’ve got there already but hopefully I can add to that... A different style of racing completely, I think that’s the thing I’m most excited for.”

Very excited to announce that I will be joining @EFprocycling for the next 2 years. It’s a team I have always admired and I’m looking forward to seeing what we can achieve together https://t.co/oRWiUuSGD3

World Tour team Deceuninck - Quick-Step is auctioning off a one of a kind S-Works Tarmac SL7 with the proceeds going towards a new climate change initiative in France. 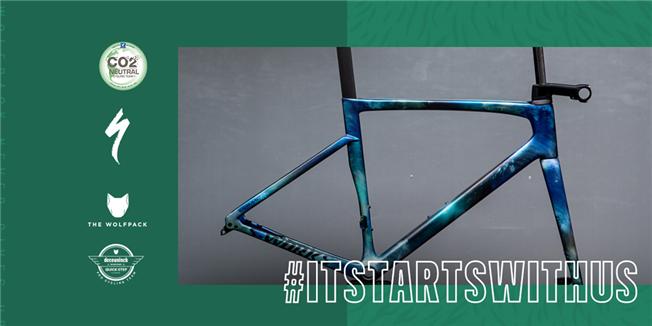 The frame is raw carbon, and instead of paint, the texture is drawn on by hand.

The bike also has the message #ItStartsWithUs mirrored in chrome supposedly to 'force the person looking at the design to reflect on themselves and remember that they too play a role in the fight to save our planet'.

If you want the chance to get your hands on this unique bike (although it is only in a 56cm frame) then you can enter here.

Based in Brittany, the climate project is one of the first ‘Label bas Carbone’ climate action initiatives in France.

This scheme reduces the carbon footprint by 'sequestering CO2' and planting more than 3000 local tree species by the end of 2021.

Police officers in North Yorkshire had to abandon their vehicles and conduct patrols on bicycles this weekend due to the lack of fuel in petrol stations.

Officers covering the Scarborough District revealed on Twitter that when they arrived at a station forecourt on Sunday night they could not refuel their vehicle, The Yorkshire Post reports.

The Government announced yesterday that it will suspend competition law to help secure fuel deliveries to petrol stations across the country. 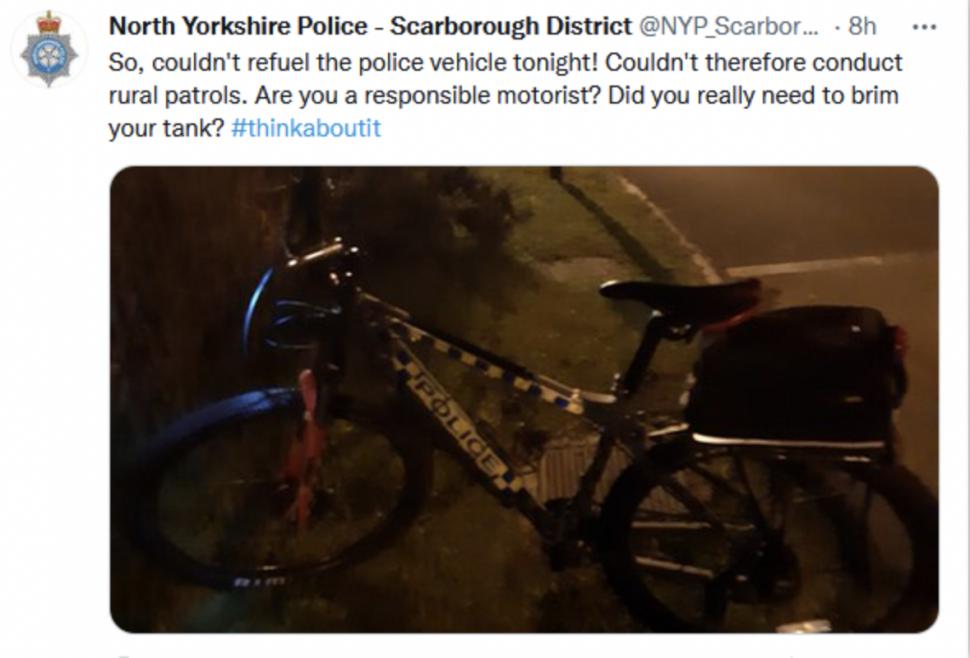