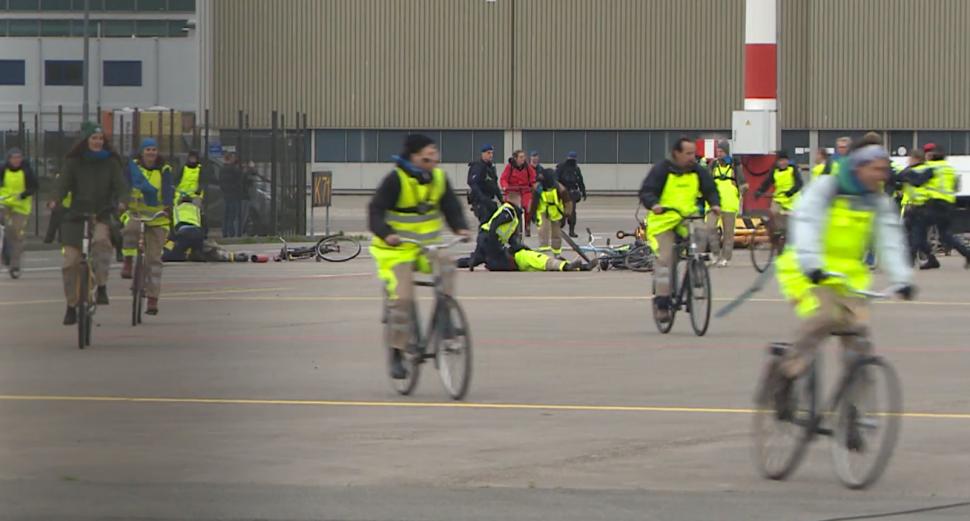 Amsterdam Airport resembled a scene from the Benny Hill Show yesterday, as dozens of two-wheeled climate activists cycled across the airport grounds, while being chased by running Dutch police officers.

At around 1pm yesterday afternoon, roughly 500 protesters from Greenpeace and Extinction Rebellion broke into the eastern section of Amsterdam Airport Schiphol, the Netherlands’ main international airport, in a bid to prevent private jets from taking off, NOS.nl reports.

A spokesperson for Greenpeace said that Schiphol is the largest source of carbon dioxide emissions in the Netherlands, emitting 12 billion kilos a year, and that the group’s aim was to secure “fewer flights, more trains and a ban on unnecessary short-haul flights and private jets”.

While some of the activists sat under and even chained themselves to the planes, others cycled across the site, causing pandemonium as members of the Dutch military police, the Royal Netherlands Marechaussee, attempted to subdue the protest.

Over 200 protesters were arrested by the military police, the highest number of arrests ever recorded at Schiphol airport.

Greenpeace has criticised the heavy-handed nature of the police’s response, which resulted in several activists being forcefully pulled from their bikes.

At least one protester, Greenpeace says, suffered a head injury during the arrests, as the organisation argued that the police were “far too heavy-handed against the activists on bicycles” and expressed its shock at the “unnecessary violence”.

“These people are facing charges relating to being in a place where they should not have been,” he said.

While Van Kapel confirmed that no commercial flights were impacted by the protest, the European Business Aviation Association (EBAA) claimed that an undisclosed medical flight was diverted as a result of the protester’s actions.

In response to the demonstrations, Schiphol said that it aims to become an emissions-free airport by 2030 and that it supports the aviation industry’s target to reach net zero emissions by 2050, while the airport’s CEO Rudd Sondag also conceded to Greenpeace that change needs to happen even sooner.