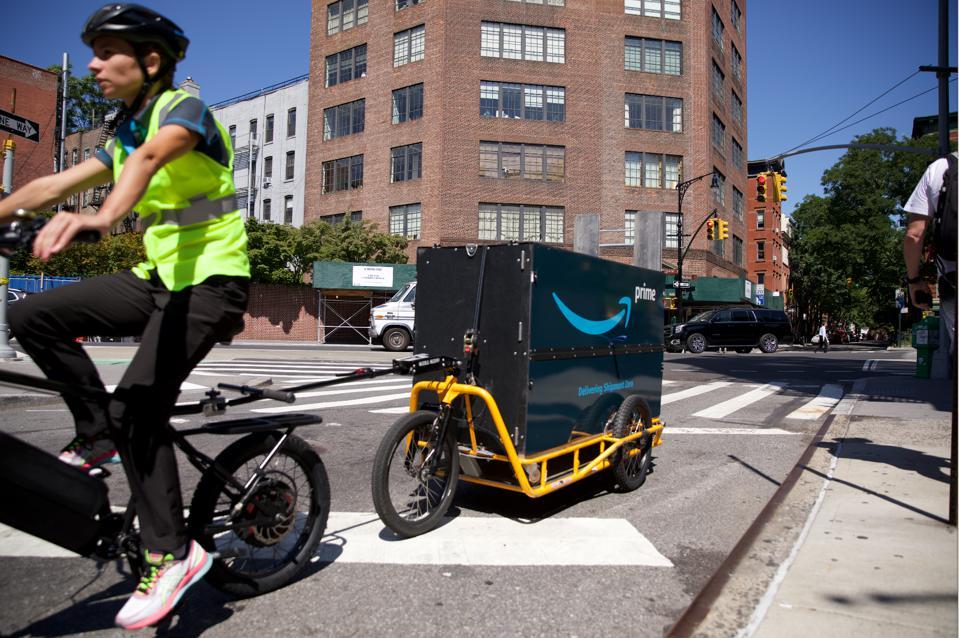 Amazon Logistics chosen to operate first hub which will remove 85 vans a day from Square Mile's streets...
by Simon_MacMichael

The City of London is set to lease 39 car parking spaces to Amazon for a last-mile logistics hub that will see the online retail giant make deliveries using e-cargo bikes within a two-kilometre radius of London Wall – in the process, removing 85 vans a day from the streets of the Square Mile and beyond.

A report from the City of London Corporation’s Department of the Built Environment (see Agenda Item 6 at page 491 here) recommends that the proposal be adopted by the Planning and Transportation Committee when it meets next Tuesday.

The report, flagged up on Twitter by user always last, notes that repurposing the car parking spaces is in line with the Corporation’s 25-year Transport Strategy, adopted in May last year, and which “provides a strong mandate to deliver a radical freight programme.”

The car parking spaces concerned are in the London Wall Car Park at the south west corner of the Barbican Estate, with the report saying that “Last mile logistics hubs facilitate deliveries by cargo cycles and pedestrian porters, removing large numbers of delivery vehicles from City streets.

“A review of parking data indicates that changing the use of these 39 spaces will leave an average of 9 free spaces in London Wall Car Park at peak use each day.

“On occasions where the car park is full, there is significant spare capacity in the immediate area at both Smithfield and NCP Aldersgate to support the small number of displaced vehicles.

“From the hub, the operator would deliver parcels to customers using pedestrian porters and cargo cycles. The hub would allow the operator to complete all deliveries within a 2km radius without the need for motorised freight vehicles.”

As shown in the map below, created on CalcMaps.com, the area that would be covered comprises not just the whole of the City of London, but also parts of neighbouring boroughs, including places such as Angel, Waterloo and parts of Whitechapel and Bloomsbury. 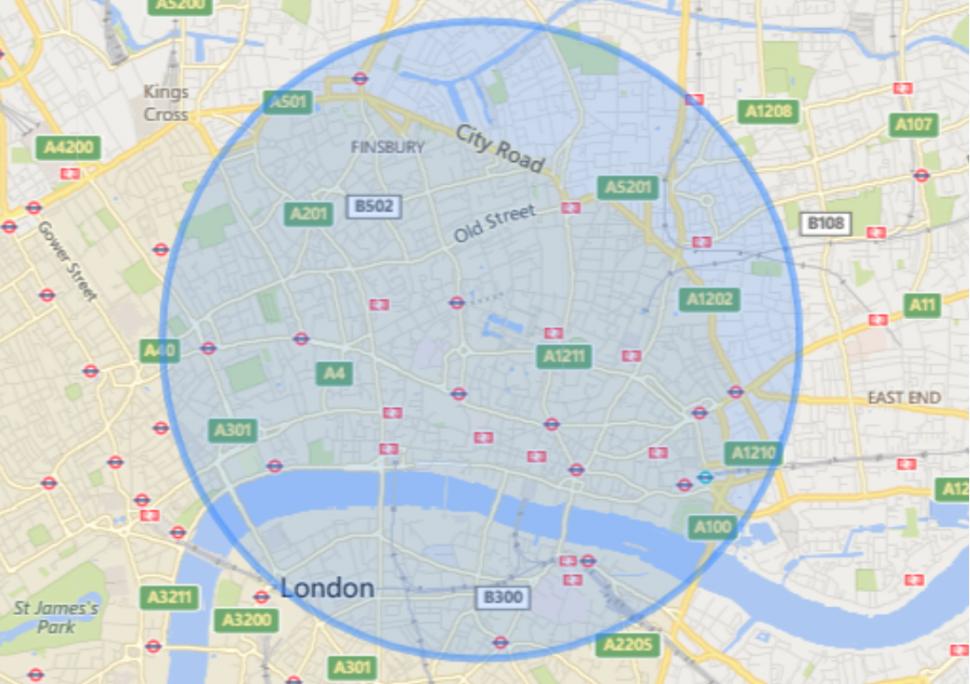 “The hub would take up to 85 vehicles off the roads each day, which is the equivalent of up to 23,000 vehicle journeys taken off the roads of central London each year [and] “would generate income from a presently underutilised asset,” the report adds.

Responsibility for the facility would remain with the Department of the Built Environment, with the hub leased to Amazon Logistics, which would also cover the cost of planning approvals and enabling works.

Under its 25-year Transport Strategy, the City of London among other things has committed to reducing the impact of freight vehicles within its boundaries, including by delivering three last mile logistics hubs by 2022 and a further two by 2025.

According to the draft City Plan 2036, “underutilised spaces in car parks “should be considered as a priority for use as last mile logistics hubs to support this ambition.”

In the report to be considered by the Planning and Transportation Committee next week, the authors say: “We have done extensive soft market testing with the logistics industry to identify the feasibility of a logistics hub at this and other City Corporation assets.

“We have established credible demand for such spaces with demand significantly outstripping supply.”

The report states that “Several major logistics operators and parcel delivery companies have expressed significant interest in sites across the Square Mile,” with 10 operators invited to submit bids for the London Wall site, with Amazon Logistics being the successful bidder.

Explaining why that specific location was chosen as the site of the Square Mile’s first last mile logistics hub, the report said: “Whilst London Wall is closer to full capacity than other City Corporation owned car parks it is being brought forward first as it is the strongest option for a last mile logistics hub.

“This is due to the shape of the facility lending itself well to use as a logistics hub, loading access from the main entrance and adjacent servicing road and the noted spare capacity within the immediate vicinity.”

Amazon already has an extensive fleet of e-cargo bikes in New York City (pictured above), and also uses them to make deliveries in a number of cities across Europe.

Other logistics firms too such as DHL and DPD now use e-cargo bikes alongside their vans, while the pink-clad riders of London start-up Pedal Me, which makes deliveries exclusively by e-cargo bike, are an increasingly familiar site on the capital’s streets.

> Pedal Me, the e-cargo bike-based delivery service, warns Amazon: “We’re coming for you”

We would expect that similar hubs to the ones planned in the City of London will  appear in other UK cities in the coming years, with the Department for Transport saying in its Decarbonising Transport report earlier this year that “A huge opportunity exists to transform ‘last mile’ deliveries, ensuring an integrated, clean and sustainable delivery system.”

It added: “Reducing emissions for last mile deliveries, particularly in urban areas, as well as potential improvements in logistics efficiency have a key role to play.”