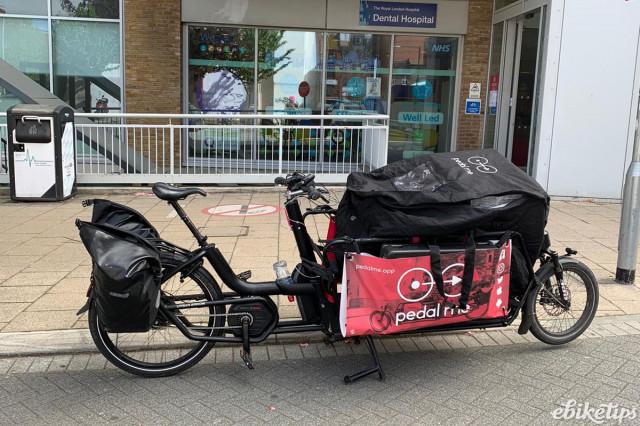 Pedal Me, the e-cargo bike-based delivery service, warns Amazon: “We’re coming for you”

Pedal Me, the London-based bike taxi and delivery service that uses e-cargo bikes to move people and goods around the capital, has warned online shopping giant Amazon, “We’re coming for you.”

The business, whose riders, dressed in pink jackets, have become an increasingly common sight in the capital in recent years, was responding to a tweet from the London Car Free Day account on Twitter, which suggested that Amazon and eBay could follow Pedal Me’s lead in using bikes rather than vans in London and elsewhere to help tackle climate change.

@amazon; @eBay_UK if @pedalmeapp can run cycle deliveries in London, why not align your delivery logistics with #ParisAgreement decarbonisation targets & more efficient mobility in London & other cities? Waiting for @dhlexpressuk; @UPS_UK to show similar leadership this summer pic.twitter.com/2GbRmfFLZo

·In response, Pedal Me said: “We have the training tools, the kit, the tech to support cycle logistics. We stand ready to assist those bigger players genuinely committed to reducing the harm they’re doing in cities.”

It added: “If not, we’ll just set up competitor products and outcompete companies insisting on using outdated motor-based logistics, as we have done in same day and on demand city logistics.”

If not, we’ll just set up competitor products and outcompete companies insisting on using outdated motor based logistics, as we have done in same day and on demand city logistics.

See https://t.co/q7WgAJTC6g -if you won’t change or work with us then we’re coming for you @amazon

While Pedal Me lost its taxi trade and many delivery jobs once the UK entered lockdown in late March, it now finds itself busier than ever due to demand for its logistics services, including delivering vegetable boxes and other foodstuffs that can be ordered through its website.

In mid-April, the company told our sister site, eBikeTips, that it was delivering more than 400 food drops a day to isolated and vulnerable people in the borough of Lambeth alone.

Pedal Me has also been delivering Batch.works to deliver 3D Printed PPE equipment to NHS hospitals in London, highlighting that its e-cargo bikes are an efficient and environmentally-friendly way of moving them and that its riders “adhere to stringent hygiene measures to ensure that the face shields will be delivered with utmost care.”

Co-founder Chris Dixon said: “To begin with business dropped off by about 80% per cent, so we furloughed a large chunk of staff while doing what we could to try and latch on to the shifting tranches of work that are out there.

“We latched on to something pretty big, and now that's meant we've had to bring almost everyone back again, and we've had to recruit to cope with demand; we're drowning in applications.”

He added: “We've had to create training to make sure all the riders are trained in appropriate aseptic technique, that they carry soap, water, and sanitiser, keep their distance, and ensure they remain safe to residents and themselves.”