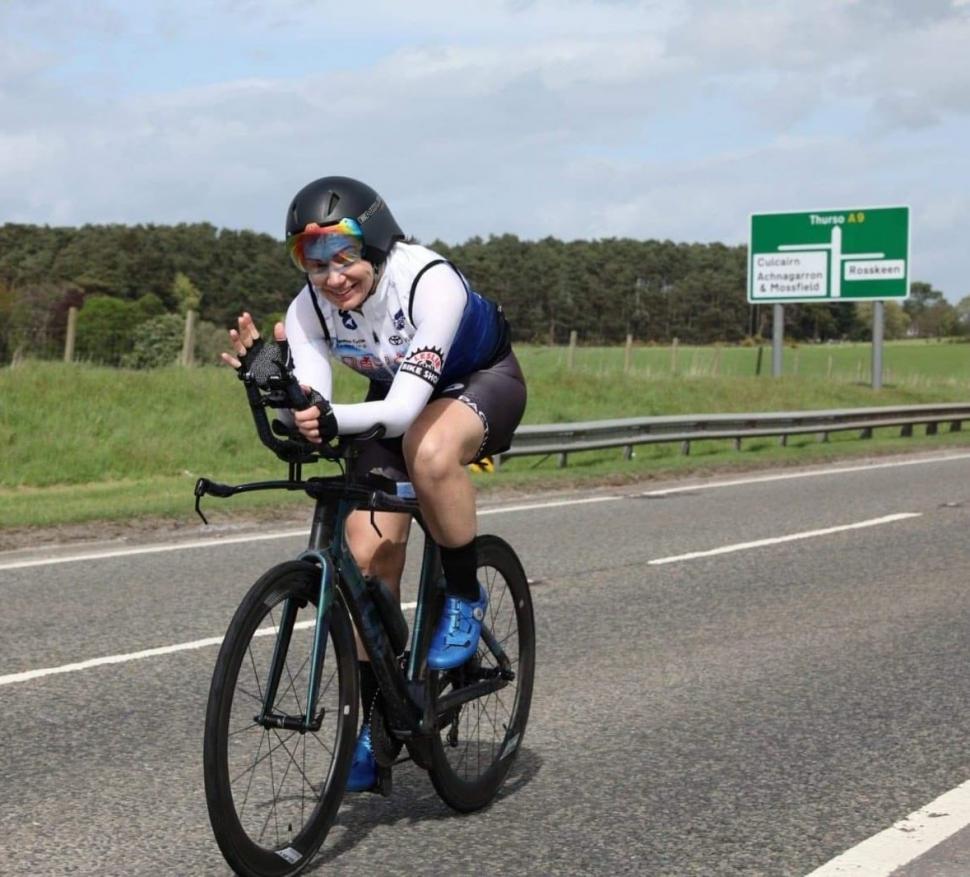 “Everyday tasks have become my new challenge”: Christina Mackenzie in “excruciating pain” after being struck by hit-and-run motorist

Update: Scottish endurance cyclist Christina Mackenzie says she is in “excruciating pain” and has “no mobility whatsoever”, two days after being struck by a hit-and-run SUV driver while she was training near Stirling.

However, the current female record holder for the Land’s End to John O’Groats and North Coast 500 routes has revealed that she now no longer requires surgery, despite breaking her pelvis and suffering multiple other injuries in Tuesday’s horror crash, reportedly caused by an undertaking motorist towing a trailer.

Just a wee update & thank everyone who has sent me personal messages & left comments. It’s a huge comfort & overwhelmingly all the kind words of support. Nearly 48hrs after the incident, I am still in excruciating pain and have no mobility whatsoever. pic.twitter.com/Jjk7MT5PxI

In a social media post shared from her hospital bed this afternoon, Mackenzie said: “Just a wee update and [to] thank everyone who has sent me personal messages and left comments. It’s a huge comfort and overwhelmingly all the kind words of support.

“Nearly 48 hours after the incident, I am still in excruciating pain and have no mobility whatsoever.

“Everyday tasks have become my new challenge. After consultation with Orthopaedics, I can avoid surgery and [I’m] now awaiting an assessment from the physio to discuss my recovery. One day at a time.”

The original story can be read below:

Scottish endurance cyclist Christina Mackenzie, who currently holds the women’s records for the North Coast 500 and Land’s End to John O’Groats routes, has suffered a broken pelvis after being struck by a hit-and-run SUV driver.

The incident occurred while Mackenzie was training on the A811 near the Kippen Station roundabout, close to her home in Stirling, at around 5.15pm yesterday evening.

According to a statement posted on her social media accounts, the 45-year-old – who was preparing for this Saturday’s Scottish Veteran Women’s Road Race Championships in Kilmarnock – was knocked off her bike by the driver of a Ford Ranger-style SUV, which was towing a high-sided agricultural trailer.

While trailers can often be a contributing factor towards collisions or close passes – as evidenced on multiple occasions on our Near Miss of the Day series – with careless drivers typically pulling in before the rear of the trailer has passed the cyclist being overtaken, it seems as if Mackenzie was initially struck by an undertaking motorist’s SUV before being “wiped out” by the trailer.

An eyewitness told the Daily Record that, as she approached the Kippen roundabout, Mackenzie indicated to turn right and change lanes. As she started to move across, the eyewitness said that the SUV driver came up the cyclist’s inside, striking her with both the vehicle and trailer before speeding off.

1/2 About 5.15pm last night (27/9) whilst out training on the A811 @christina_mack was knocked off her bike near to Kippen Roundabout by the driver off a Ranger type SUV towing a high sided agricultural type trailer. She’s currently in hospital having sustained a broken pelvis

While the driver sped off as the time trial specialist lay injured by the side of the road, one of Mackenzie’s training partners noted that “the following motorists and a bus driver stopped and rendered excellent assistance to Christina before the emergency services arrived.”

Mackenzie suffered a broken pelvis and multiple other injuries in the collision, and is currently being treated in hospital.

A Police Scotland spokesperson said: “We were called around 5.05pm on Tuesday, September 27, to a report of a crash involving a cyclist and a car towing a trailer which failed to stop on the B822 at the Kippen roundabout, Stirling.

“The cyclist, a 45-year-old woman, was taken to Forth Valley Royal Hospital for treatment.

“Enquiries are ongoing to trace the driver and anyone with information that could help, including dash-cam footage, is asked to contact Police Scotland.”

Eyewitnesses or anyone with information have been told to contact police on 101, quoting incident number 2444 of Tuesday, September 27.

Yesterday’s horror crash has scuppered the end to what has been a sensational year for the Scottish endurance athlete. In May, Mackenzie set a new women’s solo record for the famous North Coast 500, covering the 516-mile route in 36 hours, 39 minutes and seven seconds.

In August she became Scottish 100-mile time trial champion and at the start of this month took her second British 12-hour championship, recording 263 miles on the Monmouthshire course.

The Stirling Bike Club rider’s impressive season built on an equally successful 2021, which featured perhaps her defining achievement to date: smashing the 19-year-old Land’s End to John O’Groats female record by an hour and half, covering the length of Great Britain in 51 hours, five minutes and 27 seconds.