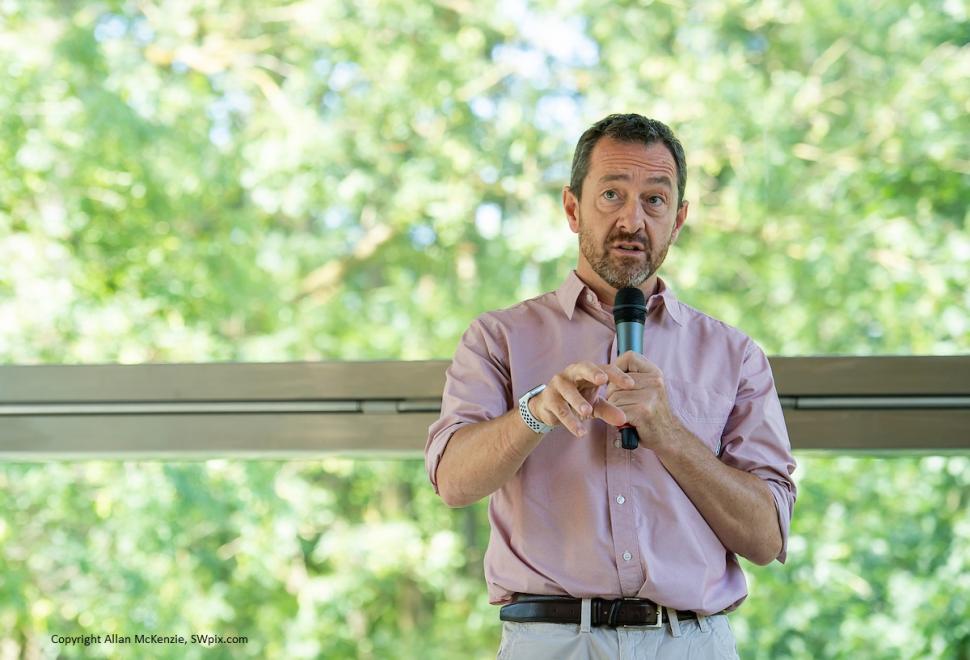 Chris Boardman "doesn't care about going fast now", only rides a gravel bike and has finally become a Zwift convert

The newly-named interim Active Travel Commissioner for England says he doesn't get much time to ride nowadays, because he's "trying to enable lots of people to ride a bike"...
by Jack Sexty

With his busy schedule getting even busier after being appointed interim commissioner of the new Active Travel England, Chris Boardman has revealed that, ironically, he has much less time to ride his bike now because he is "trying to enable lots of people to ride a bike." The only bike Boardman now rides regularly outside is a gravel bike, and he's a reluctant recent convert to indoor training.

Speaking on episode 17 of the road.cc Podcast, Boardman says that his gravel bike (that bears his name due to him founding the Boardman bike brand, of course) is all he really needs for his riding around the Wirral peninsula.

"I love the flexibility of my two hour rides on The Wirral. I stitch together bits of quiet road, and then I'll go on to a bit of track.

"I really like the mix, and the rest of the world is sort of starting to feel very much the same way.

"...I don't actually keep a road bike at home. I don't need it. So I'll just borrow one from the guys [at Boardman Bikes] when I go and do a sportive." Boardman also revealed that he's finally seen the light with indoor training, despite being rather reluctant at first.

"I always said... indoor trainers, it feels like failure.

"You've got all this world outside, and even if it's muddy, and wet, it's real. Riding in a box, staring at a screen just feels like failure.

"And then I tried it a year ago... and I thought bloody hell, this is really convenient, isn't it?

"I can get reasonably healthy, I can have a meeting, go and do 30 minutes, 45 minutes, grab a shower, be back... all really quickly.

"And it's efficient. So I've I've reluctantly succumbed and utilise it a lot."

Boardman also weighed in on the current crop of athletes taking on the Hour Record, of which he still holds the 'Best Human Effort' of 56.375 km after the UCI's 1997 rule changes banning extreme positions.

"Well, records are made to be broken... I think what people enjoy about it is there's no second place.

"The beauty of the hour record is the risk involved, where somebody says "I'm going to do this" and they've generally done a fair bit of homework.

"But they might lose, and you can empathise with that and when you're watching it, you are on tenterhooks waiting, see what's going to happen.

"There are moments when new technology tends to come to the fore, or at least it was... the UCI really got on top of its rules now and tends to be stopping a lot of that.

"We really started to make big leaps forward from 2008 to 2016, and now it's levelling off. The rest of the world... found new ways of doing things and slightly better positions, and I really liked seeing it.

"I really enjoyed watching Dan Bigham, and the guys just decided to do team pursuiting differently about three years ago.

> Listen to Dan Bigham on episode 5 of the road.cc Podcast

"It's great when you've done something your whole life in a given way, and then somebody comes and looks at it differently. A lot of that is visible in record attempts."

1
Cyclist's severed foot found on hit-and-run suspect's car as driver arrested
2
Near Miss of the Day 794: Driver passes cyclists signalling right — police suggest riders should have turned quicker
3
"Someone could be killed": Path users blame speeding cyclists for New Forest danger
4
"They said give us the bike or we stab you": Another cyclist targeted by motorbike-riding muggers on popular route out of London
5
"On fire" Geraint Thomas "best I've ever seen him", according to Rod Ellingworth
6
33 bikes that feature Shimano’s new 105 Di2 groupset from Bianchi, Ribble, Cervelo, Mason, Fairlight + more
7
Land’s End to John o’Groats cyclist dies less than 30 miles from finish
8
New Giant Propel to debut at Tour de France