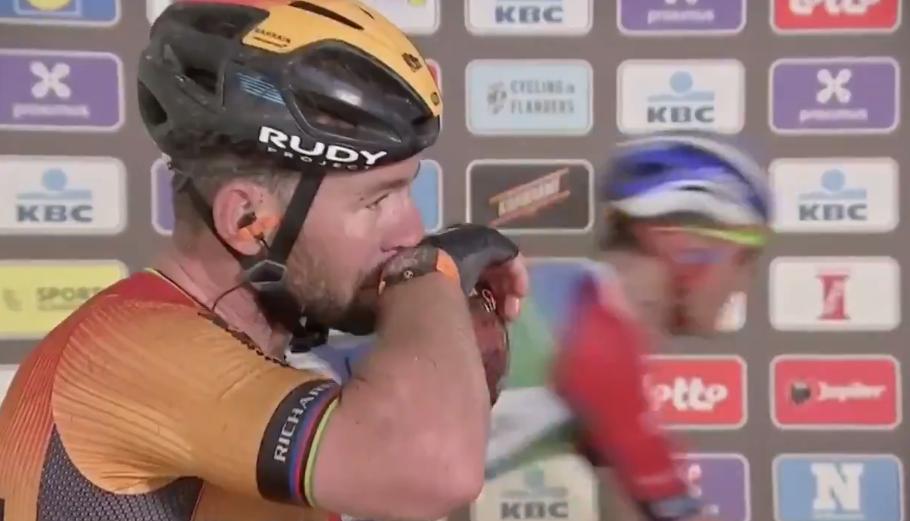 Mark Cavendish in tears after Gent-Wevelgem: “That’s perhaps the last race of my career” (+ video)

End of the road for the ex-world champion, out of contract at the end of the season?
by Simon_MacMichael

Mark Cavendish, who is still without a contract for next season, has said that today’s edition of Gent-Wevelgem is “perhaps the last race of my career.”

To the surprise of many watching, the 35-year-old Bahrain-McLaren rider was in today’s break at the Belgian Classic, won by the Trek-Segafredo rider Mads Pedersen.

Cavendish, who finished 74th, 6 minutes 11 seconds after the winner, was in tears as he said that it could be the final race of a glittering career that has been overshadowed by illness and injury in recent years.

The Sporza reporter to whom he was speaking following the finish of the race said, “Mark Cavendish, I can see that was a really hard day for you.”

As the rider apparently struggled to keep his feelings in check, the reporter said: “You’re getting emotional, how was your day?”

Brushing away tears, Cavendish replied: “That’s perhaps the last race of my career.”

“Do you really think that’s your last race?” the journalist asked.

This reaction from @MarkCavendish 💔😪

“That’s perhaps the last race of my career.”pic.twitter.com/xTye6H0iXh

The Manx rider had been expected to lead Bahrain-McLaren in Wednesday’s Scheldeprijs, a race he won in 2007, 2008 and 2011, although in light of his comments today there is bound to be speculation of whether he will now take to the start line.

Cavendish joined his current team at the start of this season on a one-year contract but was left out of its Tour de France line-up, just as he had been by his former team Dimension Data in 2019.

His switch to Bahrain-McLaren reunited him with Rod Ellingworth, team principal at the UCI WorldTour outfit who brought Cavendish through the British Cycling Olympic Academy and masterminded his road world championship win in Copenhagen in 2011.

Yesterday Ellingworth, quoted on Cyclingnew.com, said that negotiations were ongoing regarding a possible extension of Cavendish’s contract, but that he expected him to continue riding next year.

"We're still working out the roster for next year,” said Ellingworth. “We're working on it."

Asked if he expected Cavendish to remain racing next season even if he left the team, he added: “There's so much happening with teams folding and so on, so we're keeping everything open at the moment. But I'm sure he's going to stay racing, yeah."

Three times a world champion on the track and once on the road, Cavendish has won 30 stages of the Tour de France, second only to Eddy Merckx, as well as the points competition at all three Grand Tours.

Injury, and Cavendish’s struggle with the Epstein-Barr virus, have taken their toll in recent seasons., however.

Since 2016, a year in which he won the opening stage of the Tour de France to take the yellow jersey for the first time in his career – one of nine wins that season – he has taken just two victories, the last being in a stage of the Dubai Tour in February 2018.