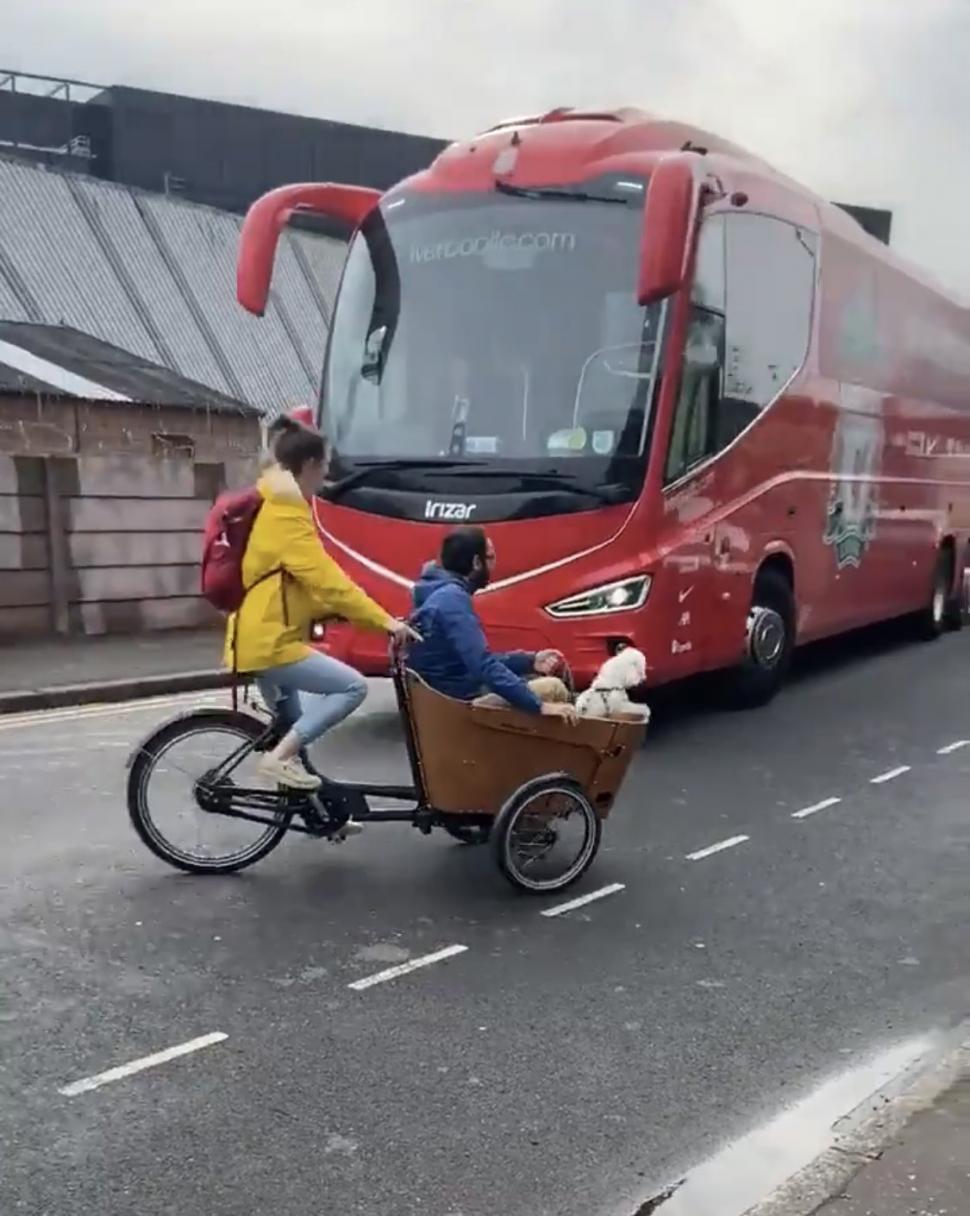 A cyclist, her husband, a cargo bike and a poodle created a social media storm this week when they 'photobombed' the Liverpool team bus.

Harrie Larrington-Spencer, 30, a PHD student at Salford University, was on her way to the pub with her husband, Çağlar, 33, and her 18 month old poodle, Frida.

The trio were travelling along a quiet cycle route they often use when, oblivious to the chaos exploding around them, they rode into the path of a Liverpool F.C bus trying to flee protesting Manchester United fans.

United fans had descended upon Old Trafford on Thursday to protest the Glazer family's ownership of the club. The latest protests came ahead of a match between United and Liverpool.

The fixture eventually went ahead as United players arrived more than six hours early to avoid delays while Liverpool made it to the stadium in an unmarked coach after their initial bus was stood down after being blocked in a side street by the protesters.

Fans let down the bus's tyres before police were finally able to clear the road and get the bus moving again, only for Harrie and her cargo bike to make an impromptu appearance.

And we’re on the move (including unexpected poodle photobomb) pic.twitter.com/0xYNGwHcZ9

Harrie explained that she and her husband had just been chatting away and were oblivious to the madness unfolding around them.

She said: "We were just on our way to the pub.

"There's a nice signposted cycling quiet route to the city centre from our house with a few good filters so it's just our normal route.

"We were a bit oblivious to it all at the end of the working day.

"The best bit about the cargo trike is that if one of us sits in the bucket then we can chat to each other a lot easier than cycling side by side.

"So we were just chatting [when] we came across a bus and people and police."

Harrie said that her first thought was that it was a sightly 'disproportionate' response from the police to a bus getting stuck.

She added: "I was a bit irritated as the police told me we'd have to go to the other side of the road to let the bus go straight, when there was flip loads of room.

"We didn't really notice it was the Liverpool bus and just continued on our way chatting."

A clip of the 'incident' was recorded by bystanders and quickly went viral with some people calling it 'the greatest football video ever'.

Another person commented: "Only in Manchester would you see a fella in a bath attached to a bike with a f****** poodle in it."

Harrie and her cargo bike even featured in the national press with the Daily Mail describing her as 'a woman pedalling a man in a basket with a white poodle and awful timing'.

Harrie said the response to the video has been very positive aside from a couple of comments from a few 'insecure men' and people who have no idea what a cargo bike is.

She added: "There's been a few fragile men who have made comments about a man being cycled around in the bucket but my husband couldn't care less.

"It's been a bit surprising that some people have no clue what a cargo bike/trike is so nice to see it getting a bit of recognition."

"woman pedalling a man in a basket with a white poodle" pic.twitter.com/vNrSa1Z8RX

Two years ago Harrie, who can be found on Twitter as @tricyclemayor, was left with a brachial plexus injury after a car driver collided with her whilst she was cycling.

Last year she launched a Crowdfunder which received over £10,000 in donations to buy e-trikes to loan to disabled people.