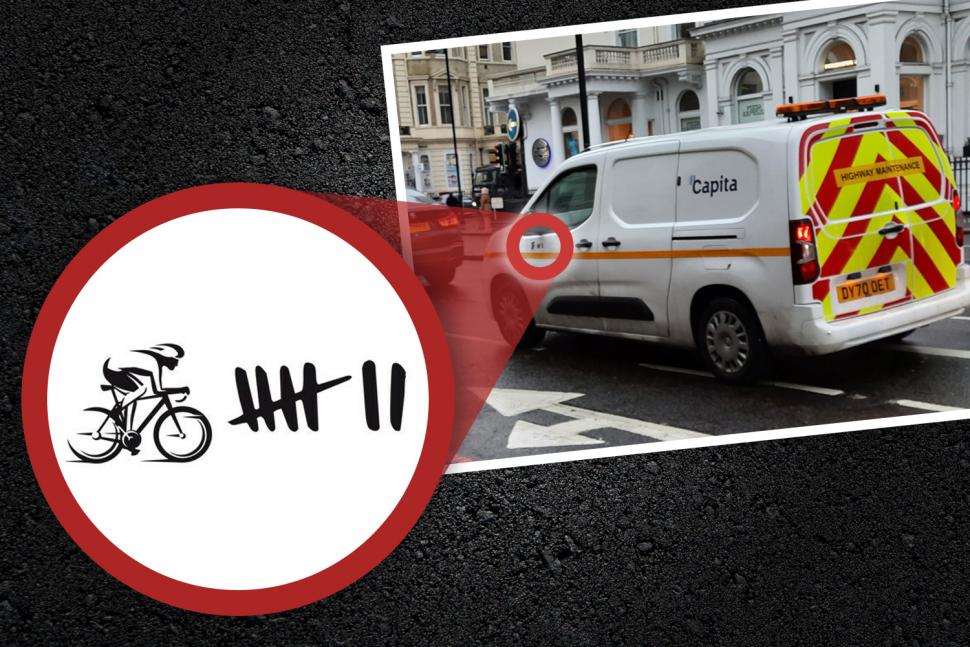 Capita plc has apologised for what it described as an “offensive and inappropriate” decal that a road.cc reader spotted on one of its highway maintenance vans in west London last week. It showed a ‘cyclist tally’ similar to the markings denoting enemy planes shot down that pilots would display on the side of their aircraft during World War Two.

The road.cc reader noticed the decal on the van as it was being driven on Cromwell Road last Tuesday, and was quick-minded enough to take a photo of the vehicle.

While the decal is not clear in the picture, the reader was able to find versions of it being sold on eBay (as shown bottom left in the picture above), accompanied by icons depicting a dog, wheelchair user and a pensioner using a Zimmer frame, each with their own tally alongside them.

A number of sellers on the online marketplace sell similar decals, some of them customisable, and with sales in some cases running into the hundreds of stickers.

“I would like to believe it's the number of bikes the driver of the vehicle owns, but suspect not,” our reader told us.

“What made it more offensive is that it was on a Capita highway maintenance vehicle, stupid on their part as they are supposed to be working for all road users and looking after their safety.”

We contacted Capita for their response to the picture, and after investigation a spokesperson for the company told road.cc: “We can confirm that one of our drivers had applied an offensive and inappropriate decal to one of our vans.

“The decal has now been removed and we have commenced a disciplinary process.

“We are sorry that this individual’s actions fell way below our corporate standards and values.”

Capita is a leading provider of outsourcing services to the public and private sector.

Last year it announced that its contract with Transport for London (TfL) to manage the capital’s Low Emission Zone (LEZ), Congestion Charge, Direct Vision Standards and recently introduced Ultra Low Emission Zone (ULEZ) had been extended for a further five years from its expiry in October 2021.

The FTSE-250 company also works on highways projects for local authorities in London and elsewhere throughout the country, including installing cycle lanes, and the spokesperson added: “We are proud to have worked on a number of schemes to make Britain’s roads safer for cyclists, pedestrians and drivers.”

To purchase some cycle-friendly stickers, head over to the road.cc shop.