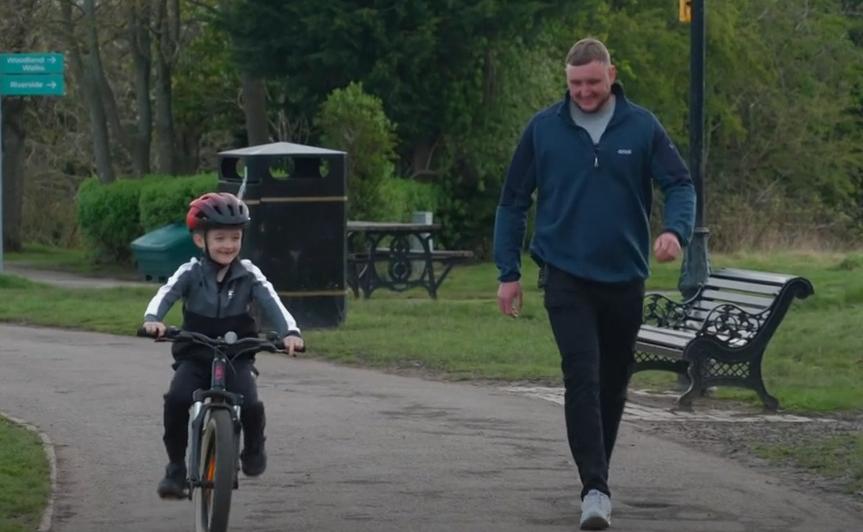 The father of a child who was struck by a drug driver while riding his bike has called for the police to be given greater powers to immediately suspend the licence of motorists suspected of driving under the influence of drugs.

Six-year-old Noah Herring was cycling to the park on an off-road bike lane with his father James in February 2021 when he was struck by a motorist at 60mph in a 30mph zone.

The driver, Harry Summersgill, was under the influence of a cocktail of cocaine, cannabis and ketamine at the time of the crash on the Yarm Road in Stockton. He later pleaded guilty at Teesside Crown Court to causing serious injury by dangerous driving and was sentenced to three years in prison. The 24-year-old was also banned from driving for six and a half years.

Speaking to BBC Breakfast, Noah’s father James recounted the traumatic moments immediately after the crash, which left the young cyclist with serious injuries.

“It was just a big explosion,” he said. “And then a couple of seconds went by, I couldn’t see Noah. And that’s when I went over and I could see him, and I thought that was the last time I was going to see my son – and I wasn’t ready for that.

“He was broken and I couldn’t fix him. Something inside just kicked in and I did everything I could for him.”

At the time of the crash, Summersgill had previously been arrested on two occasions for driving under the influence of drugs.

Under the current system, motorists arrested for suspected drug driving can continue to drive while they await the results of blood tests, something James says must change to prevent further serious and potentially tragic incidents.

He said: “Magistrates will just get a piece of paper telling what the person has and hasn’t done. Whereas police officers see this day in and day out.

“I think if the police had more power to do something about it on the spot – revoke that licence or suspend that licence – that’s the fastest way to do things.”

Earlier this month the government launched a public consultation on the creation of a high-risk offender scheme for drug drivers, that would include a rehabilitation course and a requirement for medical clearance before a convicted drug driver can regain their licence, which James describes as “a step in the right direction”.

“Drug driving ruins lives,” he said. “I believe the more information, help and support out there, the more chance we have to stop drug drivers.”

40 percent of people arrested for drug driving have been convicted before, according to Mike Barton, the former Chief Constable of Durham Constabulary, who said it was a “miracle” that Noah survived after being struck at 60mph.

“People don’t realise that cars and vehicles are weapons, and people see it as a right that they can drive their car and be cocooned in it,” Barton told BBC Breakfast. “But of course it’s really dangerous and you’ve seen that [with the incident involving Noah].

“It’s only in the last few years that the law has changed so drug driving is an actual offence in itself – it only came in in 2012.

“From a standing start, the police now prosecute 10,000 people a year for drug driving. So it’s a remarkable rise over the last ten years.

“But of course, more needs to be done, and the big problem with drug driving is finding that 40 percent of the people who are convicted of it have been convicted before.

“I think if we just rely on convictions, that’s not going to solve the problem. I think there’s got to be something wider than that.

Barton agreed with James’ call to increase the speed at which decisions are made concerning drug drivers, but noted that the current system, along with a lack of financial resources in a number of police forces, provides a barrier to immediate action.

He continued: “So what’s been done outside the criminal justice system is something called ‘Operation Revoke’. If the police suspect that somebody’s got mental health issues, a medical condition, or drug dependency, then the police can get that evidence together, send it to the DVLA, and they can then revoke that person’s licence after due process. But, sadly, that takes months.

“While James was talking about the need for immediacy, which I agree with, at the moment the things that are being done take time.”

The former Chief Constable also pointed out that drug tests are undertaken by the private sector, costing, according to Barton, £16 for a roadside saliva test to be conducted and £400 for it to be tested.

He said: “In some police forces which are short of cash there may be a fiscal reason why they’re not doing as many drugs tests as they might have done”.

Fortunately, despite suffering serious injuries in the crash, Noah, now eight, is fully recovered and is back riding his bike.

“There’ll hopefully be a lot more bike riding in the future for us,” his dad said. “Cycling was a massive part of my life and hopefully it will be a big part of Noah’s.

“Noah’s my hero – no kid should go what he went through. But he went through it, and he’s had a lot of support and he supported us. And he’s back to being a happy little child again.”