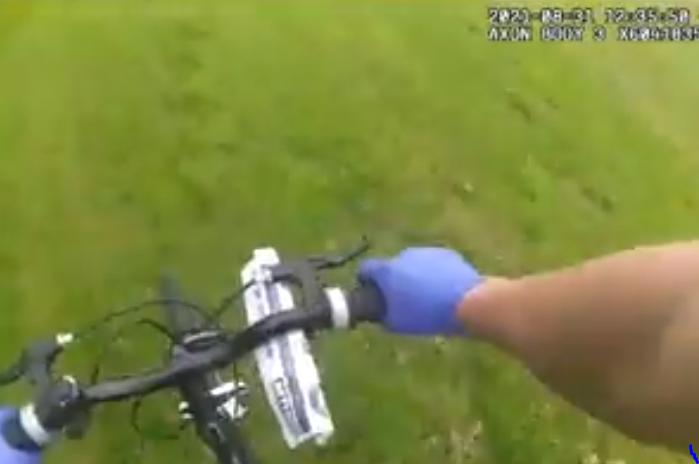 Police in Birmingham have shared a video on social media showing the moment one of their officers borrowed a bike from a member of the public, enabling him to chase down and arrest an individual wanted for breach of bail conditions relating to domestic abuse.

He kindly agreed and pedalling PC Tom Harris soon had the suspect in his sights… and in handcuffs.
The 23-year-old was wanted over a bail breach after he allegedly defied his conditions by turning up at a woman’s home, hammering on the door and threatening to force entry.

PC Tom Harris had been investigating reports of a man breaking bail conditions by visiting a property he was banned from when he spotted the individual a quarter of a mile away at Oaklands Recreational Ground in Yardley.

He gave chase to the suspect and, seeing the cyclist, asked if he could borrow his bike.

“Are you after that bloke?” the rider asked? “Yeah, that bloke there,” replied PC Harris. “Cheers mate.

He then pedalled the bike – complete with newspaper wedged between the handlebars and brake cable – across the park to apprehend the man, with the incident, which happened on 31 August, filmed on his body cam.

Reaching the 23-year-old suspect, he said, “Stop! Hands behind your back now!”

The man, one of whose arms was in a sling, said, “Watch my arm, man!” as he was handcuffed.

PC Harris then called a fellow officer to ask, “Can you meet me where you dropped me off, I borrowed a member of the public's bike and now I need to drop it off.”

He then saw two PCSOs who said they would take the bike back to the cyclist who had lent it to the officer for his successful pursuit.

It’s the second time this year we’ve reported on a quick-thinking police officer borrowing a bike to chase down a criminal, with an officer from Greater Manchester Police doing so in April to catch the driver of a stolen car who had crashed the vehicle.