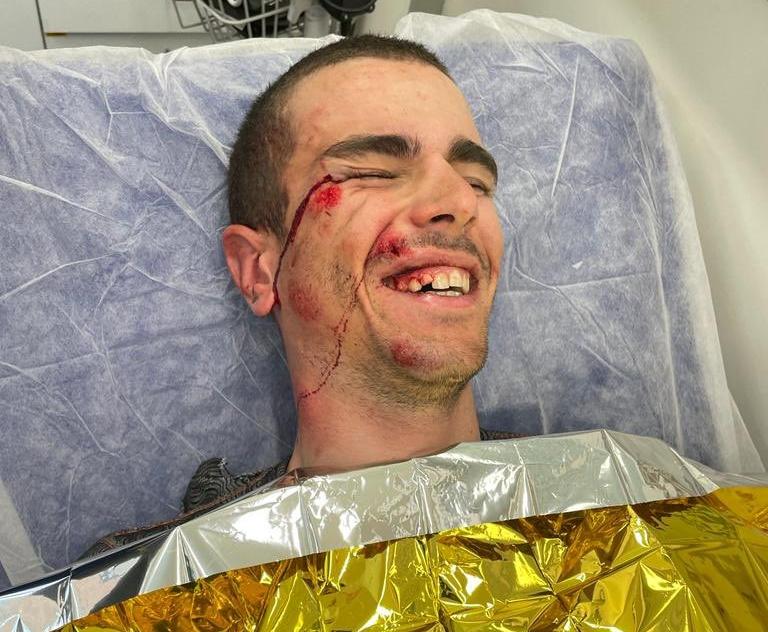 Astana pro "unconscious for 20 minutes" after Amstel Gold crash, has no memory of incident

Astana Qazaqstan rider Samuele Battistella has no memory of the crash that ended his chances at Amstel Gold Race yesterday, and says he was unconscious for 20 minutes after the fall.

The Italian came down as the peloton negotiated a roundabout after striking an unmarshalled piece of road furniture, hitting his head on impact.

The 23 year old was taken to hospital, with his team later updating fans with the full list of injuries, which included wounds to the face requiring stitches, and a chipped tooth.

In a bad crash during the race (after some 150 km) @samu_batti got some wounds on his face and broke one tooth, 4 stitches on eyebrow and 3 stitches on upper lip have been applied. We wish Samuele to get well soon!#AGR22 #AstanaQazaqstanTeam pic.twitter.com/8AfzxXjxRd

Battistella added to the update, saying "luckily the medical staff at the hospital said all is 'ok' I just need recovery and to stay under control.

"I've lost the memory on what happened yesterday at Amstel Gold Race. I crashed so hard that I wasn't conscious for 20 mins or more."

⚠️medical update
I’ve lost the memory on what happened yesterday at Amstel gold race, I crashed so hard on the ground that I wasn’t conscious for 20 mins or more.. luckily the medical staff at the hospital said is all “ok” I just need recovery and stay under control. pic.twitter.com/XmFqqdGn6I

Tadej Pogačar was one of the many well-wishers replying to the update, saying: "I hope you are okay and you will recover fast!"

With their likely team leader out of the race, Astana failed to contest the win in Valkenburg, as Alexandr Riabushenko in 54th was the team's highest-placed rider of the two who completed the 254km day.

> "I feel so bad for him!": Amstel Gold Race photo finish drama AGAIN as Benoît Cosnefroy celebrates...only to be told result on live TV

Michał Kwiatkowski ultimately won the race, pipping Benoît Cosnefroy in the tightest of photo finishes. The Frenchman celebrated having been told the decision had gone his way only to be heartbreakingly broken the news that he had in fact been beaten as the live TV cameras continued to roll.