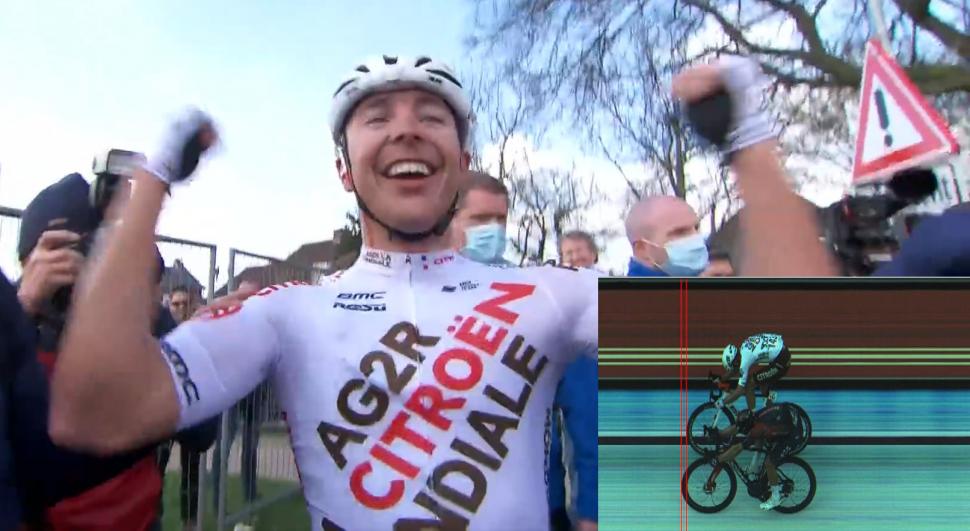 "I feel so bad for him!": Amstel Gold Race photo finish drama AGAIN as Benoît Cosnefroy celebrates...only to be told result on live TV

What is it about Amstel Gold Race? 12 months ago Tom Pidcock was left heartbroken by a photo finish decision, still contested by some, which saw Wout van Aert awarded the race. This year, Benoît Cosnefroy thought he won the race, celebrated wildly, only to be told Michał Kwiatkowski had actually beaten him in the sprint...

It's 𝐡𝐞𝐚𝐫𝐭𝐛𝐫𝐞𝐚𝐤 for Benoit Cosnefroy - who was told he won Amstel Gold before the photo finish revealed Michal Kwiatkowski took the win by the narrowest of margins 🤯📸#AGR2022 | @INEOSGrenadiers pic.twitter.com/rqemvsmfou

Messages of anguish, pity, sympathy and consolation for the AG2R Citroën puncheur filled social media after the heartbreaking moment of ecstacy into defeat was captured perfectly by the finish line cameras.

Cosnefroy celebrated jubilantly, punching the air, and was congratulated by teammates and soigneurs, only for the victory to be ripped from him as news came through of the photo finish, prompting a reverse reaction from race winner Kwiatkowski and Ineos Grenadiers teammates Tom Pidcock and Dylan van Baarle.

It’s all about believing! What a feeling 🤩 Great job Team 💪 Amazing ride @BenoitCosnefroy 👏

Thomas De Gendt was another enthralled onlooker who took to Twitter with a little tip for future: "Suggestion. Wait to declare a winner after confirmation of the photofinish. Imagine what Cosnefroy is feeling now. From heaven to hell in one minute."

Cosnefroy took the decision magnanimously, even seeing the funny side, sharing a video of his half pint-downing race on the podium with the caption "And this one won?"

It was one of those days over in the Netherlands. Marta Cavalli earned the biggest win of her career in the women's race.

In the absence of covid-positive team leader Cecilie Uttrup Ludwig, the Italian attacked in the final two kilometres to hold off the lead group, winning ahead of Demi Vollering and Liane Lippert.

Perhaps a sign of the surreal antics to come in the men's race was this race-invading spectator, possibly fuelled by some of race sponsor Amstel's finest, testing the limits of his lightweight machine...

Does a smaller bike = more aero and faster? We got our answer at today's #AmstelGoldRace pic.twitter.com/b6Jq1IDoOd