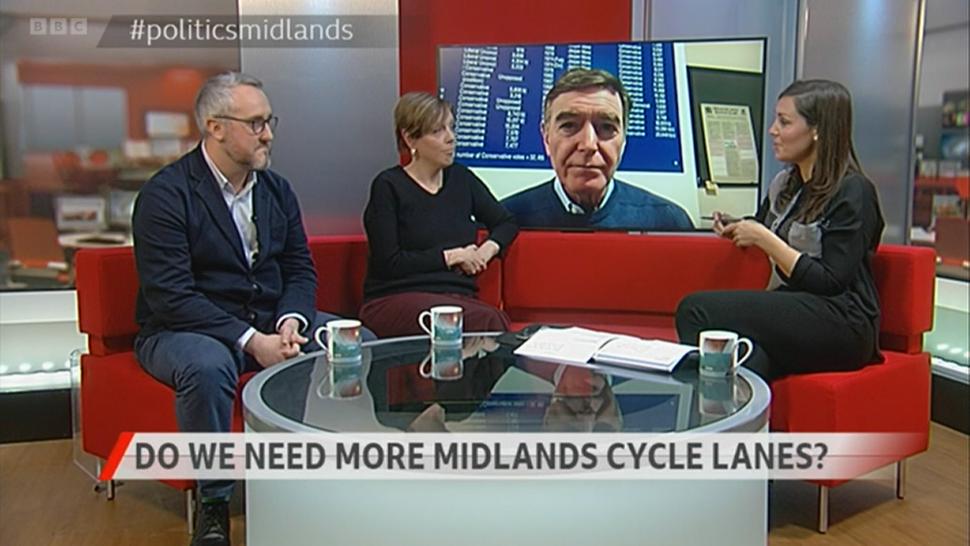 What's going on? Sensible discussion, no culture warring and even a Tory MP making the case for a Land's End to John O'Groats cycle lane...
by Dan Alexander

BBC Politics Midlands presenter Elizabeth Glinka opened the Sunday morning show's segment on cycling infrastructure by calling it "this week's hot topic". Mind you, cycle lanes, the Highway Code and rules for cyclists seem to be just about every week's "hot topic" this year, with increasing numbers of radio phone-ins, TV talk shows and even BBC Panorama regularly tackling the 'big issues' on Britain's roads...

But, if you are hoping yesterday's coverage follows in the footsteps of Panorama's 'Road Rage: Cars vs Bikes' or Vine on 5's 'Cycling Row: Who's in the Wrong?' viral video debate from the other week then you are going to be disappointed.

If, however, you have had it up to your eyeballs with 'us vs them' coverage of cycling issues, then you will be glad to hear West Midlands Cycling & Walking Commissioner Adam Tranter's reassuring words to presenter Glinka plus guests — Labour MP Jess Phillips and Conservative counterpart Philip Dunne.

"We're just talking about human beings," Tranter replied to a question about cycling becoming a 'culture war' topic on social media to the point, Glinka suggests, you "don't talk about politics, religion or cycling" for fear of a "clash".

Is there a culture war going on between cyclists and motorists?

West Midlands Walking and Cycling Commissioner @adamtranter says people should not be identified by the mode of transport they take in today’s #PoliticsMidlands pic.twitter.com/GCefFE4J1l

"Today I've walked, I've cycled, I've driven and normally I get the train as well," Tranter continued. "I don't say 'I'm a busist', I am not identified by the mode of transport that I take, so frankly we just need to get people about in the most effective and most efficient way."

And the cycling positivity continued throughout the segment, Tranter making the case for investment in infrastructure, Tory MP Dunne expressing his desire for there one day to be a full Land's End to John O'Groats cycle lane, and presenter Glinka saying the public reaction to a BBC Midlands tweet was "overwhelming" in favour of more lanes needing to be built.

Should there be more cycle lanes on roads in the Midlands or are there enough already? We’ll be discussing the issue in Sunday’s #PoliticsMidlands Let us know your view now. pic.twitter.com/y5Utwk6tjE

"On Wednesday we put out a tweet and asked if there should be more cycle lanes in the region or if there are currently enough?" she said. "Crikey did we get a response, the overwhelming view of those who contacted us was that there need to be many many more of them."

Tranter explained: "People might think all cycle lanes are created equally, when they're not. We went through decades of building cycle lanes that give up at sideroads or end in the middle of nowhere. Now we're thankfully taking it really seriously and want Dutch quality cycle lanes."

Explaining how one such lane in Binley in Coventry was seeing 10,000 cycling trips a month before it has even officialy opened, he added: "When we build it properly we get big returns. We definitely need more, some of the older stuff needs upgrading, but what you need is a network.

@adamtranter did a fine job on BBC’s #politicsmidlands of making the case for better cycling infrastructure in the region and for ending the silly division between cycling and driving when lots of people do both. And hopefully all the region will commit to support cycling.

"If you were driving a car and there was only one road, that's not going to suit all your journey needs so we need to have routes, we need to have a connected network [...] These are investments — for every £1 we spend on cycle lanes we generally get about £5.50 back in economic and health benefits."

Adding to Tranter's words, Conservative MP Dunne said while his Shropshire constituency lacked the same interest in commuting by bike as urban areas "there's a great deal of interest in leisure cycling".

"I have a particular pet project. I'd like to see a cycle lane from Land's End to John O'Groats because it [the route many people take] goes through the A49 in Shropshire," he told the show.

"I think that would be a great thing to do. Of course right now with cost of living pressures people want to travel cheaply so in urban areas I think cycling is the right way to go because it has health benefits as well."

Jess Phillips then joked she's "a trainist", prompting the only disagreement of the ten-minute segment as the Labour and Conservative MPs present enjoyed a brief but predictable back-and-forth about striking rail workers before the discussion returned to blissful harmony on cycling's benefits.

Cross-party agreement, flames of social media 'culture wars' put out, and no deliberatly provoking 'view from the other side' — this does all make a nice change, doesn't it?