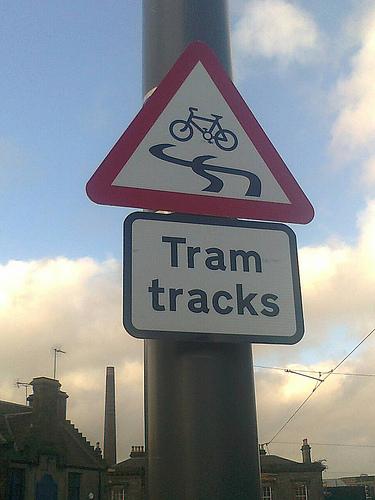 Despite occasionally having a rather tense relationship, in Edinburgh cyclists and taxi drivers have joined forces to fight the new tramlines at Haymarket station.

Due to restrictions on taxis waiting in ranks outside the station, queues of up to 15 cabs are tailing back into cycle lanes, now that the intersection has re-opened following work to put in the tram lines.

Riders say they are being forced to weave around traffic, and come into conflict with the tramlines, which can be slippery or trap tyres.

Anthony Robson, creator of campaign group Citycycling, told the Scotsman: “The knock-on, for cyclists, is that taxis queuing in the lane are now poking out into the main carriageway, just where the tram tracks are edging to the left, which means those cycling have to cross the tracks at an astonishingly shallow angle.”

Last weekend we featured a video of a cyclist forced to cross tram tracks at a dangerous angle, and falling off his bike.

Chris Hill, who shot the footage, told road.cc: “The falls are right by the taxi rank.

“If there are more than 6 on the rank the 'extras' mean that bikes have to cross the tracks rather than follow the narrow bit between the track and the kerb.

“But plenty of cyclists are already between the tracks.

“The council has 'designed' a route that goes into the taxi lay-by so that bikes can come out and cross the tracks at a 'better angle'.

“Unfortunately this can be obscured and blocked by taxis!”

One user on the website CityCyclingEdinburgh said that the tramline incidents were directly related to the chaos resulting from the new road layout.

Arellcat wrote: “The problem is not the rails. The problem is partly design but mainly drivers, forcing cyclists into making rushed* and unplanned manoeuvres. Cyclists will happily cross rails given suitable space and time to do so. But in almost every instance they are allowed neither, because it has been engineered-out from the start.”

Another wrote: “Yesterday was my first day on the new road layout, coming into the city centre past Haymarket was so much nicer that bumping round the crescents.

“Coming back out was good as well until my back tyre found some slippy track and kicked out from underneath me. Luckily I had been following the chat on here so had slowed down and also noted the slippy tracks sign so was able to remain vertical.

“My biggest concern however was when I tried to go straight on from the cycle lane as the tram tracks go past Haymarket and to the left. It felt to me as though I has to move out into the tracks and momentarily cycle along them to go straight.”

There are new taxi ranks planned for Rosebery Crescent and Grosvenor Street, but these are yet to open.

Cyclist and Green Party councillor Gavin Corbett said: “I’m heartened to hear that taxis and cyclists are seeking common cause on the problems at Haymarket.

“It would be much better for taxis to take ownership of that problem themselves than for it to be done through enforcement, but we also still need to look again at avoiding the conflict in the first place.

“That can only mean seeking to keep cyclists further away from tram tracks.”

1
Peter Sagan comes to the aid of “flabbergasted” British cyclo-tourist in Gran Canaria
2
Grant Shapps calls for new ‘death by dangerous cycling’ law
3
Near Miss of the Day 704: Two abreast group close passed by impatient driver who almost hits front rider
4
Highway Code changes: Daily Mail publishes "error-strewn" Richard Littlejohn column attacking cyclists
5
Here's how to make a DIY VO2 max tester for use with Zwift and Strava for only £130
6
Highway Code changes: what is the Dutch Reach and will drivers be fined £1,000 if they don't use it?
7
This stunning Cervélo R3 is currently being raffled off in aid of The Pace Centre and Movember
8
Stages will retrofit a power meter to your existing cranks