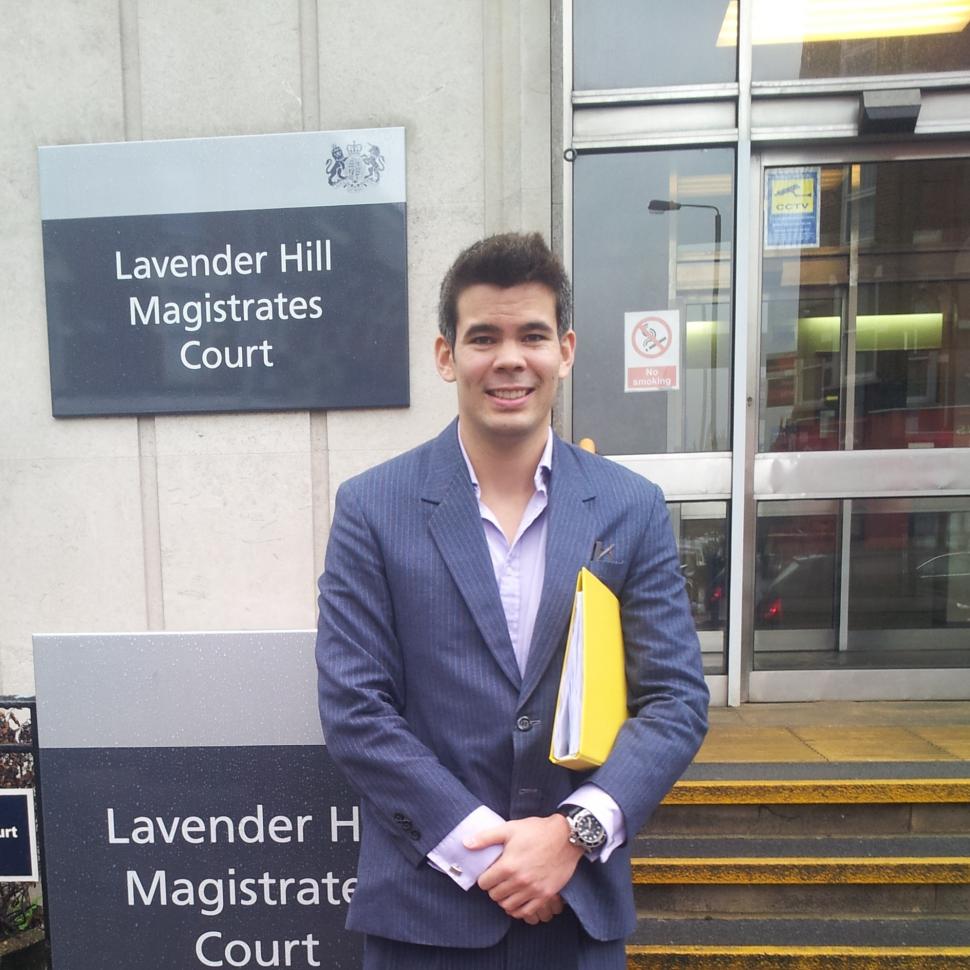 Alex Paxton, a London cyclist who is fighting a fixed penalty notice imposed after he was unable to safely use an advanced stop box, yesterday pleaded not guilty at Lavender Hill Magistrates Court. A trial date was set for December 5.

Earlier this week, his barrister Puneet Rai filed a letter with the CPS asking them to review whether a prosecution would be in the public interest. The judge has  given the CPS until 6 November to respond.

Alex is being supported by the Cyclists’ Defence Fund (CDF), a charity set up by the CTC to fund precedent-setting cases involving cycling and the law. The £2000 needed for his case was raised through crowd-funding.

If the case goes ahead, CDF will help Alex and his barrister prepare his case.

Police imposed the fixed penalty notice on Alex in August, when he rode past the line of an advanced stop box because it was occupied.

Not wanting to cross three lanes of moving traffic in order to turn right, Alex positioned himself ahead of the  vehicle in the ‘cycle box’, which technically meant he ran a red light even though he remained at the junction.

A police officer who saw Alex radioed a colleague stationed along the road he turned down. That officer issued Alex with the fixed penalty notice. Alex argues that as the officer who issued the fine had not witnessed the offence, he was not able to assess the greater danger Alex would have been in had he complied with the law.

Alex received advice from CDF on how to contest the fine and was given assurance that CDF would assist with funding the legal challenge. He will contest the fixed penalty notice at Lavender Hill Magistrate’s Court, Battersea, on at 2pm this afternoon.  The case is likely to conclude the same day.

Alex said recently: “My resolve probably would have faltered taking this to court had there not been such overwhelming support from fellow cyclists to back my case.”

When fixed penalty notices for footway or pavement cycling were first introduced, the Government assured cycling organisations that the penalty would be applied fairly and only when a cyclist’s actions endangered pedestrians, not, for example, when a cyclist uses the pavement to avoid a dangerous road.

“Advanced stop lines are there for a good reason: around 70% of cyclists’ collisions occur at or near junctions. They are by no means perfect, but when used properly they have the potential to save lives. We understand that the Department for Transport is planning to update regulation around ASLs to overcome the considerable problems with their access, which does give us some hope that they will also clarify what a cyclist should do if an ASL is illegally occupied by a vehicle.”