German company launch their first cyclo-cross bike and we have the £1,189 model in to test
by David Arthur @davearthur

This is Canyon's all-new Inflite AL 8.0 cyclo-cross model (launched at Eurobike last month),  the middle of a three-bike range, and it combines an alloy frame with a Shimano 105 groupset and mechanical TRP disc brakes for £1,189.

Before we continue, we have to point out that the Inflite will be sold with Shimano disc brakes when it’s available in November. Shimano’s voluntary recall of the CX77 brakes recently pushed back the launch of the Inflite, but keen to get road.cc on the new model as soon as possible, they built up a bike with TRP brakes. Everything else about the bike is as it will be when it’s available. 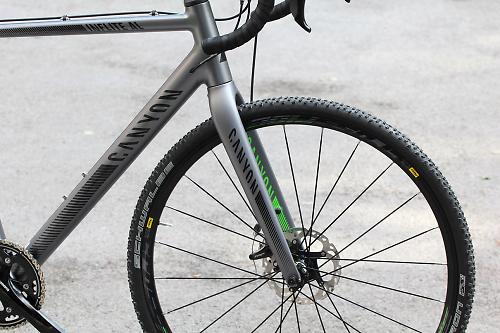 So, with that out of the way, let’s talk about this new bike. It is Canyon’s first every cyclo-cross bike, and has been some time in development. At its heart is a frame loosely based on the Ultimate AL road bike. Cyclocross-specific features include routing the rear brake cable along the top of the top tube, with a full-length outer casing to keep mud and dirt out. The gear cables are routed inside the down tube, while the front brake cable flows down the outside of the fork leg. 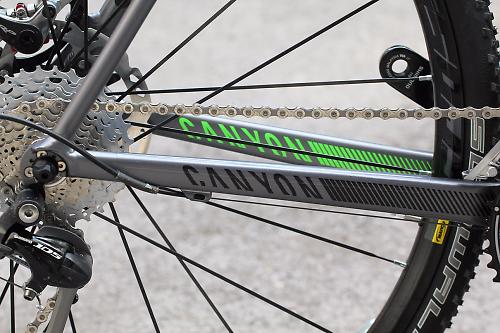 The alloy frame has a purposeful look. An oversized down tube and Maximus seat tube, borrowed from its road bike cousin, along with a rounded square top tube form the backbone of the frame. Canyon has fitted its unique VCLS Post 2.0. It's made from carbon fibre and is intended to tame rear wheel impacts. The post is split into two halves, or two flat springs, which operate parallel to one another. Box section chainstays are coupled to small profile seat stays.

Canyon has developed a new Canyon One One Four SL Disc carbon fibre fork, with a post mount for the brake caliper. The brake cable is simply routed outside the fork leg, with zip ties securing it in place. The steerer tube is tapered to provide a little more stiffness in the front half of the frame. At the opposite end the rear disc caliper is fixed outside of the dropouts, on the seatstay. 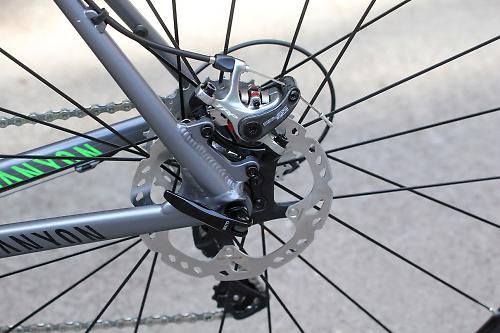 There’s a split between manufacturers placing the caliper on the seatstay, like this, or inside the dropout. Both seem to have their advantages. Placing the caliper in this position though does limit the fitting of mudguards, but Canyon has solved that by designing its own ‘guards manufactured by SKS. There are small mounts halfway up the fork leg and seat stays, filled with plastic bungs on this bike, but which removed allow the fitting of Canyon’s own mudguards. That’s a neat solution to the problem of of combining disc brakes and mudguards. 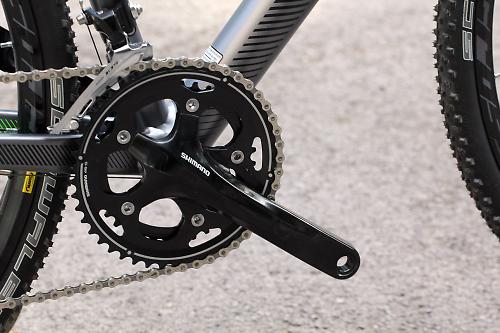 The bike is built up with Shimano 105 Black STI levers,  front and rear derailleurs, and a CX50 Black chainset. The 46/36 chainrings combine with the 11-32 cassette to provide a good range of ratios for off-road riding and racing. The bottom bracket is an Ultegra 6700 PressFit item. 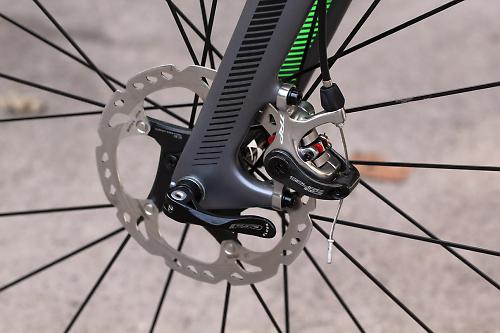 The production bike will come with Shimano CX77 mechanical disc brakes, as we pointed out earleir, but we’ve got TRP Spyre disc brakes instead. That’s no bad thing, they scored very well in the road.cc review this year. Rotors are 160mm front and rear. 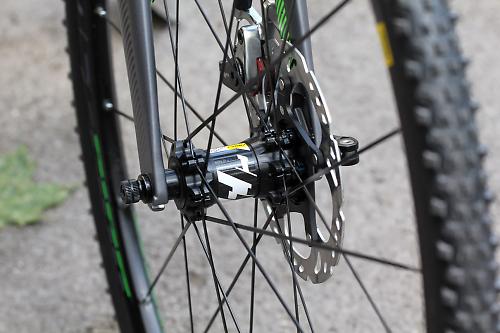 The Inflite rolls on Mavic Crossride 29 wheels with Schwalbe Racing Ralph Evolution tyres. That’s a mountain bike wheel by the way.  A 2,020g (claimed weight) wheelset featuring reinforced 6061 black anodised rims, 24 front/rear straight pull bladed spokes and a multi-bearing alloy freewheel. Interestingly, Canyon has opted to go for quick release axles, rather than bolt-thru. The simplicity of quick release axles is an obvious reason for their use, but some might have thought such an engineering-led company might have been a bit more forward-thinking perhaps. The Inflite is finished with a Ritchey WCS Evo Curve handlebar, WCS 4-Axis stem and an Ergon saddle. The frame is available in six sizes, we’ve got a size large in for test, which Canyon call a 58. With an effective top tube of 56.3cm and a 57cm seat tube, it’s a bit smaller than that in reality. The head tube measures 16cm,  the wheelbase 102.5cm and chainstays 42.5cm. The head angle is 72°and the seat is 73.5°. Rolling onto the scales, it comes out at 9.32kg (20.54lb). 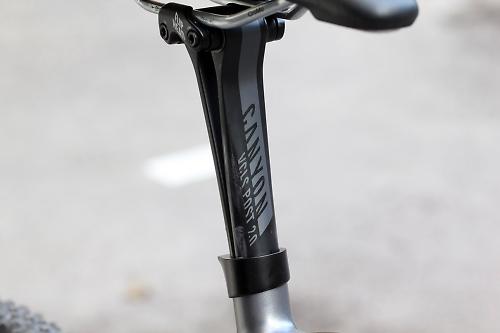 The Inflite will also be available with an Ultegra 11-speed groupset for £1,439, which keeps with mechanical Shimano CX77 brakes. At the other end of the scale is a £1,109 build with slick tyres and Canyon’s own mudguards. It demonstrates the inherent versatility offered by cyclo-cross bikes nicely. This is also the only way to get a Canyon road bike with mudguards, which makes it an enticing winter bike option for Canyon fans. At that price, with a Shimano 105 groupset, it looks like a steal.