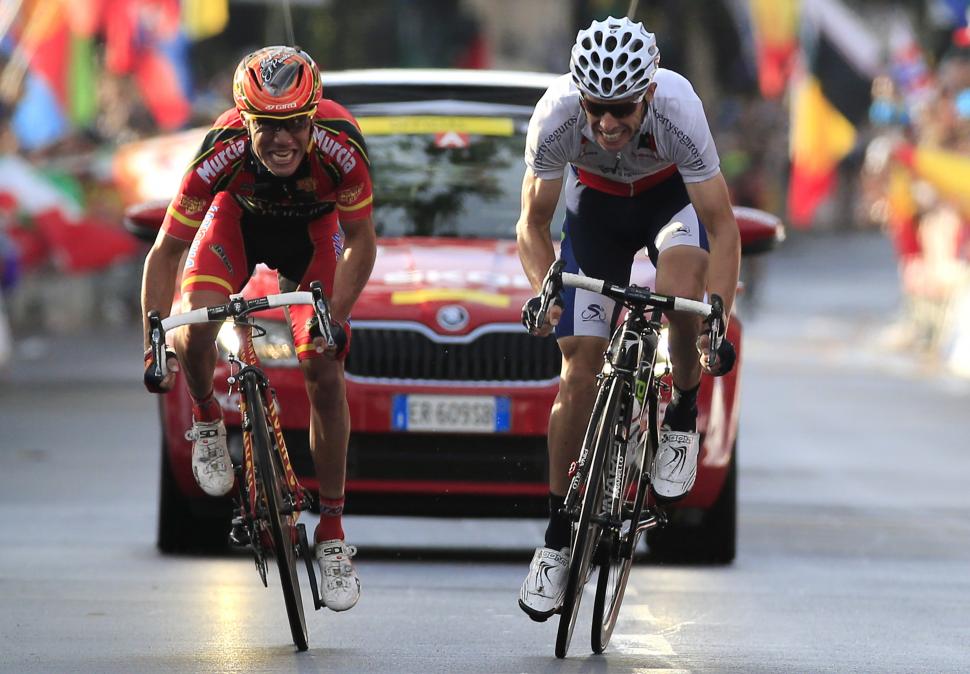 Podium finishers + Nibali and Froome reflect on today's race through the Tuscan rain...
by Simon_MacMichael

Rui Costa of Portugal is the new world road champion following a tough race in Tuscany in which heavy rain - and even thunder and lightning - gave way late on to clear skies and, presumably, a rainbow in addition to the one adorning the jersey he won after a two-way sprint in Florence, beating Spain's Joaquin Rodriguez into second place.

Five riders seemed set to contest the finale in the closing kilometres, but Colombia's Rigoberto Uran succumbed to a crash. That left Costa and Rodriguez, plus the latter's team mate Alejandro Valverde and Italy's Vincenzo Nibali, to fight it out.

Nibali had crashed earlier, the effort of chasing back on perhaps costing him dear. Spain had the numerical superiority, but couldn't capitalise on the one-two punch of Rodriguez's attacks and Valverde's sprint; instead, Costa had the coolest head and overhauled a devastated Rodriguez in the closing metres.

Here's a round-up of reaction, but first, the video highlights:

Wearing this jersey was a goal during my entire career and I can't still believe it. I had this race marked down on my season schedule.

The World Championships are always sort of a lottery, difficult to win. It's hard, even more in a race like this, with soaking rain, especially in the first three hours.

You always go through ups and downs in such courses; at some points I didn't feel well, but my feelings in the last lap were better.

I knew I had to stay focused into the Fiesole climb and stuck to the decisive move. I also knew I'd be struggling at Via Salviati, and knew where I had to attack to chase Joaquin down and going for the sprint with him.

I was thinking the same as everyone about these Worlds - I mean, Italy leading the race, the Spaniards closing the gaps on Nibali - so I took a choice about how I should have ridden before the race.

But I know Purito [Rodriguez] well, and I never thought I could beat him. Now it's time to finish this season; I will have time to enjoy and taste this victory after that.

I can’t be happy for this medal: both Alejandro and I have a great palmarès, but we can’t seem to win the rainbow jersey.

Today we were really close, but clearly it had to be Rui Costa’s day.

I thought I could make it in the last kilometre, but when I saw him arriving, I understood I couldn’t finish.

I tried to challenge him, but it just wasn’t enough.

Spain’s Alejandro Valverde, third today, the fifth time he’s finished on the podium without ever getting onto the top step:

I can't complain: I have snatched five medals, and even though the gold didn't come today, we'll to our best to contest it in the next few years.

Purito rode perfectly, and there was some moment when I though he could really win.

At the end, Rui launched a strong attack. I didn't rule out Rui's chances - I knew he was as dangerous as Nibali and I shouldn't be leaving him go ahead, but after 270k, the legs did not respond so well, and those meters he took into the turn...

I couldn't close it. I should have been there, but I couldn't.

Taking second and third is something to be happy about, and we must congratulate him - he was the best today.

Italy’s Vincenzo Nibali, who recovered from a crash to become one of the four protagonists in the finale, but finished out of the medals:

Valverde [who beat him for third] didn’t ride a correct sprint, because he squeezed me out to the right.

Before that happened, I couldn’t close down Rui Costa because it wasn’t up to me with two Spaniards there. We’ll try again.

Great Britain’s Chris Froome, who abandoned after 3 of the 10 laps of the closing circuit:

The conditions are the same for everyone; we've got no excuse. We just weren't there.

It's a big disappointment, especially having made it such a big objective, but with these conditions it just wasn't meant to be.

The first three laps on the circuit, there were crashes everywhere. It's rained solidly all day.

After three laps the split started happening and I looked around and realised I didn't have any team-mates left and it wasn't going to happen.

Given we've come up empty-handed, we'll have to go back to the drawing board [ahead of the Olympic Games in Rio de Janeiro in 2016].