Okay, we know we said there weren't as many disc-braked road bikes at Eurobike as we were expecting, but when the day one hangover cleared and we had another look round, it turned out there were a lot more. The flood might not be quite up to our nipples yet, but it's definiitely well over our knees. Here, then is part two of our look at disc-braked road bikes.

The bigger manufacturers like Merida, Specialized and Cannondale might have grabbed the headlines, but there's a number of smaller manufacturers showing some smart looking bikes. 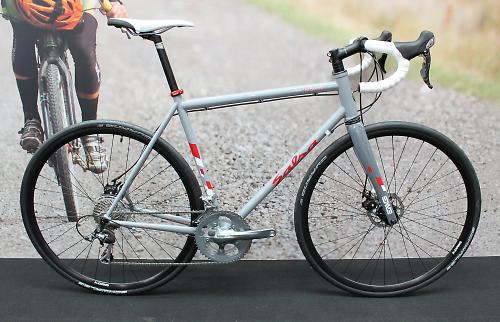 Not a new bike, but a new paint job for Salsa's rather lovely Colossal. Released about a year ago or so, the Colossal is a disc-equipped road bike, with a titanium or steel frame and an Enve carbon fork sliding into the tall headtube. 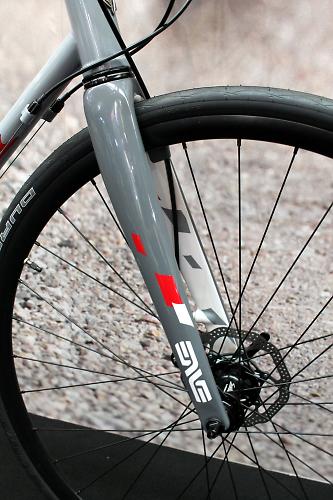 Salsa have pitched the geometry at the rider who favours a bit of comfort and balance over all-out race aggressiveness. 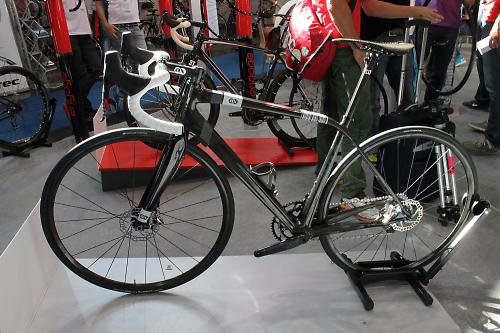 The AX Lightness stand is always worth a visit at Eurobike for their collection of extremely lightweight carbon components. This year AX Lightness had this new disc road bike, based on the Vial we saw last year but with a frame built around disc brakes. They've very neatly recessed the SRAM Red hydraulic disc caliper into the chainstays. The new fork has a bolt-thru axle, something we've only seen on a very small handful of bikes this week. Out back is a regular quick release axle. 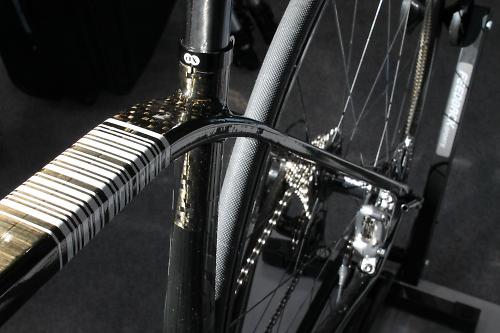 With its huge box section main tubes, kinked chainstays and a top tube flowing seamlessly into the seatsays, it's real head-turner. 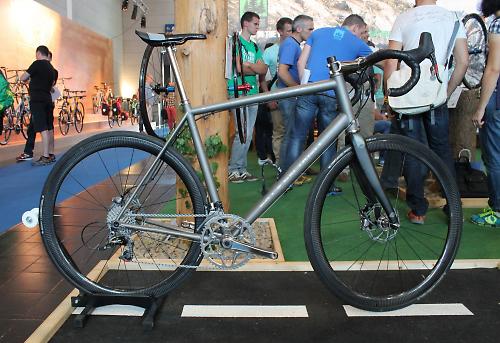 This lovely looking bike is the Falkenjagd (try typing that with a hangover) Aristos RS, a titanium disc-equipped road bike that we spotted on the Tune stand. As such, it was fully decked out with Tune components, including Tune Prince/Princess hubs. With a SRAM Red 22 groupset, including hydro brakes, the all-up bike weight is a claimed 7.4kg. Very few of the road disc bikes we've spotted have bolt-thru axles, this bike has them front and rear (similar to the Storck). Out back is a Syntace X-12 bolt-thru setup (a 12mm axle standard that is common on mountain bikes), with the disc mounted atop the seat stays, and a stiffening brace inside the dropouts. 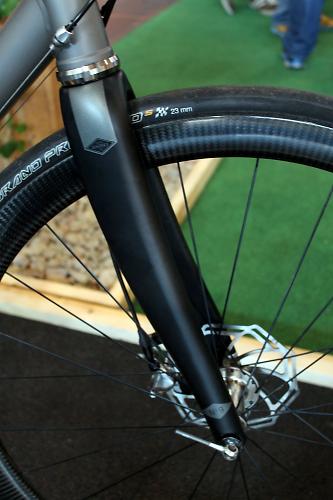 An obstacle to disc brakes being fully embraced on road bikes is the lack of parts. The Whiskey No.9 carbon fork is one of the few aftermarket disc forks available to smaller bike manufacturers who perhaps don't have the deep pockets required to produce their own fork. This fork is made from unidirectional carbon and has a tapered steerer tube with post mounts, with capacity for up to 185mm rotors. There's space for 28mm tyres and it has a 15mm bolt-through axle. 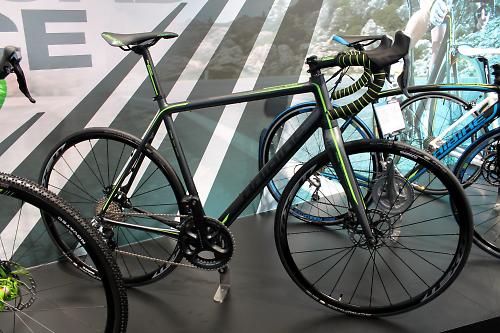 This is Haibike's Q Race RX Pro, which combines a carbon fibre frame with a full Shimano Ultegra groupset, RX31 wheels and their new hydraulic disc brakes. Where most disc road bikes have the rear disc caliper located inside the rear stays, Haibike have placed it on the outside of the stays just above the dropout. The frame is Di2 compatible and the 'comfort geometry' gives an indication of the type of riding the bike is intended for. 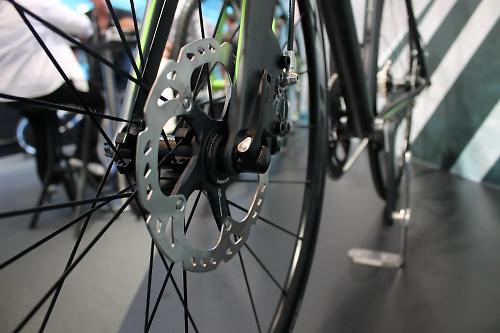 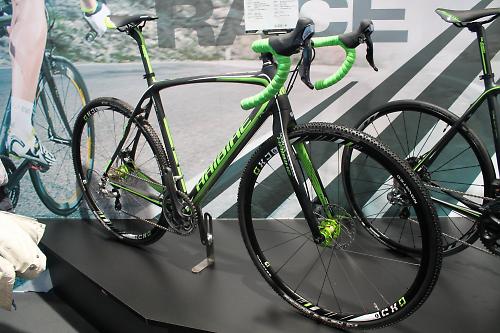 Also on the Haibike stand was this Noon RX carbon cyclocross model, with a bolder than bold paint finish. Shimano CX75 mechanical disc brakes, with 160mm rotors front and rear, are fitted to Novatex CXD-D hubs and the all-up weight is a claimed 7.9kg. 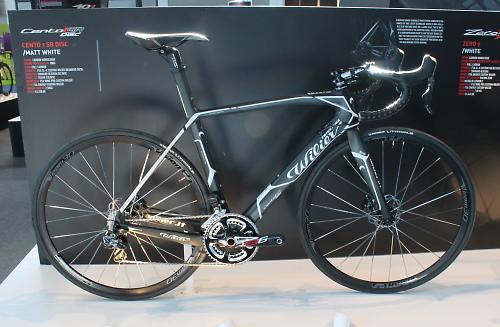 The latest model from Italian company Wilier is this Cento1 SR Disc, seen here with Shimano R785 hydraulic discs. They claim it's not a mere adaptation of the standard Centr1 SR frame, but a ground-up redesign to fully integrate the disc brakes. The rear triangle is new, and they've fixed the disc caliper to the top of the chainstay. 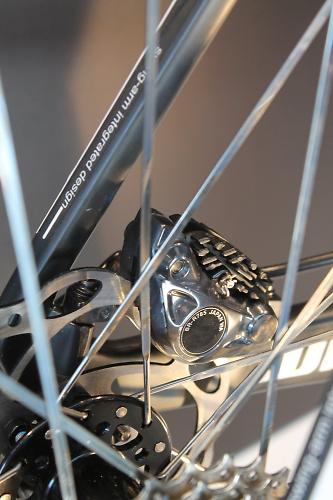 The frame is made from high modulus 60-ton carbon fibre with some massively oversized tube profiles and similarly oversized fork. Cables and wiring are routed internally, with a particularly neat downtube entry point for the gear cables. 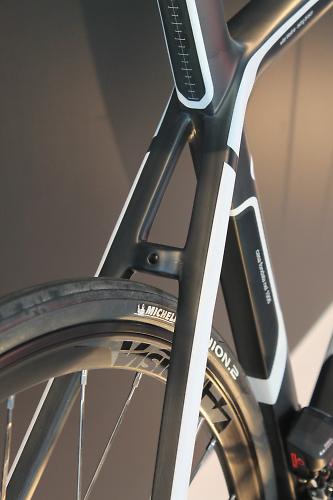 A lot, well most,  disc road bikes we've seen this week have dedicated disc seatstays, with a complete absence of a brake bridge. Not so with the Cento1 SR Disc, with the brake bridge showing a redundant caliper brake mount.