For 2014 Cannondale have pushed their flagship SuperSix Evo to an even lower price point, courtesy of a revised frame design with external cable routing, and completely dropped the old SuperSix from the range. There's a new women-specific SuperSix Evo as well.

The other big news is the unveiling of the Synapse Disc. Two models, based on the aluminium version of the their new endurance road bike, show the company's interest in disc-equipped road bikes, although it's more of a small toe dip in the water than a fully-fledged commitment.

The SuperSix Evo is now available at its lowest ever price, £1,699. You get a near identical frame with the same geometry as the one that is raced in the World Tour, but at a fraction of the price. It's built up with a Shimano 105 groupset and wheels making it a very competitive bike at this price. 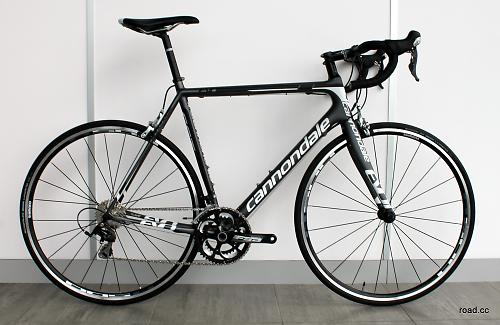 To turn out an Evo at this new lower price (and in the process eliminating the SuperSix entirely) Cannondale have slightly modified the frame. The key change is full external cable routing, with different cable stops bonded to the down tube, which reduces the build time. 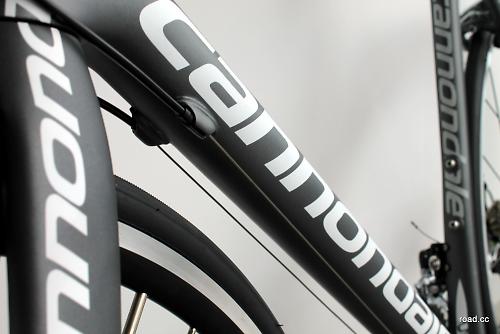 That change aside, the frame has the exact same tube shapes as the more expensive models: the huge down tube, 30mm Pressfit bottom bracket, tapered head tube and skinny seatstays. The Ballistec Carbon that is used is the same as that of the more expensive Evo frames too. It's built up with a Shimano 105/Tiagra groupset with a compact FSA Gossamer chainset, Shimano R501 wheels and Cannondale's own C3 bars, stem, seatpost and saddle. The frame is available in the one colour option (black) and four sizes. If you're feeling a bit flush, then how about a team edition of the Evo? This is the same bike used by Peter Sagan and Ted King. In essence it's the same as the Evo 105 (above) too, but the frame uses the company's Ballistec Hi-Mod carbon fibre which reduces the weight quite a bit. The cable routing is different too, the rear brake passing inside the top tube and the gear cable mounts located on the side of the head tube. 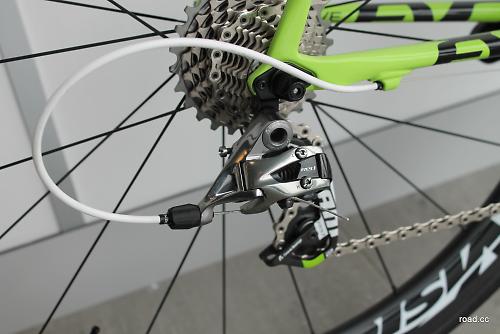 This model is decked out in the team sponsors' kit, including Vision Metron 55 carbon clincher wheels, Kenda tyres and a SRAM Red 10-speed groupset. The team have yet to switch over to SRAM's new RED 22 groupset, after it was launched back in April. Teams and riders are typically reluctant to make major equipment changes without adequate testing time, so we could expect to see them transition over to the newer groupset during the winter. Or I could be completely wrong... only time will tell. 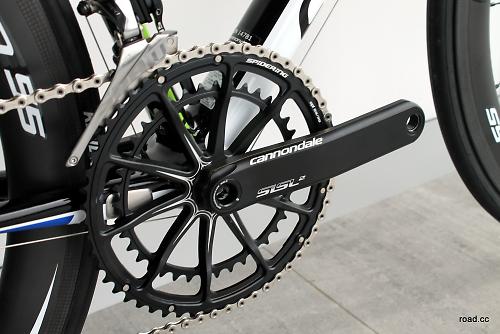 Other sponsor parts include the FSA K-Force carbon handlebars, stem and seatpost, Fizik Arione saddle and Cannondale's own HollowGram SiSL2 chainset. Cannondale is one of a few manufacturers, along with Specialized, who produce their own chainset. This is one of the lightest on the market with a claimed 483g weight (compared to 557g for an equivalent SRAM Red chainset). The unique 10-arm design is said to be inspired by the wheels found on race cars and is claimed to handle the forces that go through a chainset better than other designs. 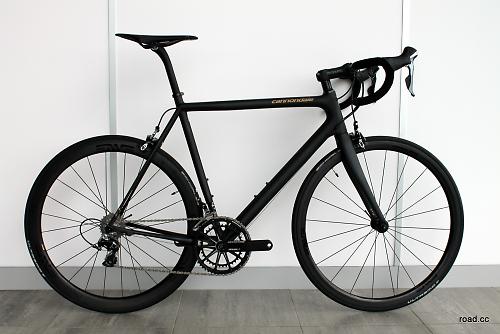 You'd think the team bike would be the lightest in the range, but it's beaten on the scales by this stunning Evo Black, which is now in its second year. The frame, made from Ballistec Nano carbon, is actually a few grams lighter than the frame used by the team thanks to a different resin that saves some weight. Claimed weight is 655g, about 40g lighter than the Hi-Mod version. The team already have to add weight to the Hi-Mod frame so there would be little sense in racing an even lighter frame. We covered this bike in detail at the 2013 launch. You can read that article here. This model earns its £8,499 (no, that's not a typo) price tag with a very special build. To match the gold on matte black frame, Cannondale have pulled in some favours from Enve, Chris King and Fizik. 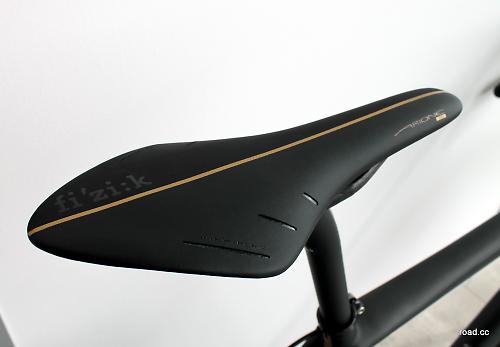 First off, the carbon railed Arione 00 saddle has a gold pin stripe along the centre, matching those found on the frame. A similar gold stripe wraps around the black Chris King hubs, and the Enve Smart 3.4 carbon rims (with a shallower section front rim) they're laced to have discreet gold decals. Enve have also produced a handlebar with a gold detailing on the centre that is displayed in the space created by the open faceplate of the Enve stem. The seatpost is from Enve too. A Shimano Dura-Ace 9070 11-speed mechanical groupset completes the build.

I was at the Synapse launch in Italy a few months ago, where the company showed a radical redesign of the bike aimed at the 'endurance' sector – bikes built for comfort over long distances. Rather than go over old ground here, you can refresh your memory by having a quick read of the launch article, which has all the technical details on the new bike. Right, memory refreshed, let's take a look at the full 2014 range... And the big news is the introduction of two disc-equipped aluminium models. When asked at the launch, Cannondale's top marketing man Murray Washburn was being very coy about a future disc brake version, but his silence on the matter was telling, so it's no surprise they've quietly slipped two bikes into the range. Showing that Cannondale are sitting on the fence on this particular development, they've used the aluminium version of the Synapse, rather than the carbon. 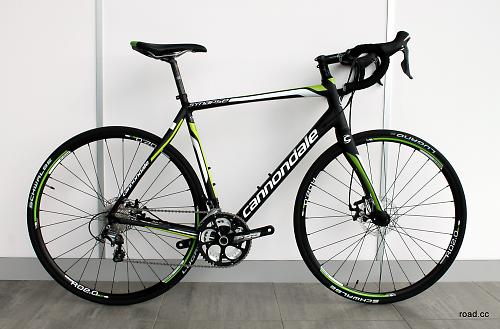 The Synapse 105 Disc costs £1,099 and the Synapse Ultegra Disc (pictured above) is £1,399. They have the same frame, made from 6061 aluminium that shares some of the tube shaping of the carbon model, but critically without the novel split seat tube at the bottom bracket, which they call the 'Power Pyramid'. It will be interesting to see how the alloy Synapse rides in comparison to the carbon bike when we get the chance. 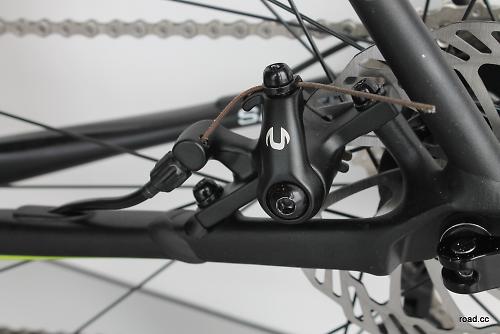 Cannondale specify this bike with their own-brand MB700T disc brakes, a mechanical design, with a 160mm front rotor and 140mm rear pairing. Groupset is a mix of new Shimano Ultegra 11-speed and FSA Gossamer 50/34 chainset. The wheels are disc-specific  Maddux RD 2.0. The frame features tidy internal cable routing. The rear mech and brake cables are routed through the chainstays, and pass up into the down tube, leaving the top tube looking very clean. This is the first time we've seen the women's version of the Synapse, available in both carbon (pictured) and alloy. It shares the very same feautres as the regular Synapse but trades in the handlebars, stem and saddle for women-specific products. The frame is also available in smaller sizes, including 44, 48, 51, 54 and 56cm options. Built with a Shimano 105 groupset and R501 wheels, it costs £1,699. 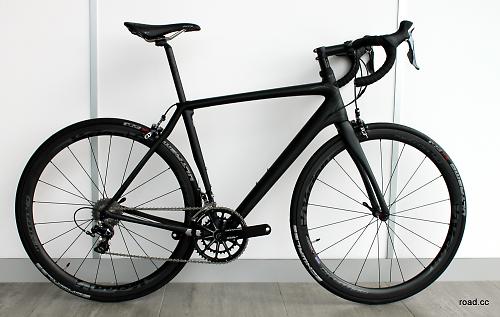 There's a Synapse Black. It gets similar treatment to the Evo Black with a similarly eye-watering price tag: £6,999, if you really need to know. It partners the excellent Vision Metron 40 carbon clinchers with Schwalbe Ultremo ZX tyres, a Shimano Dura-Ace 11-speed groupset and SiSL2 chainset. At the other end of the range there's this smart looking Synapse Carbon 105 costing £1,699. It is the same shape as the Synapse Black but with a cost-saving Ballistec carbon rather than the Hi-Mod type. A Shimano 105 groupset and R501 hoops keep the price down as do the Cannondale branded C3 components and FSA Gossamer chainset, a very common chainset at this price range. The frame is Di2-ready should you be interested in upgrading in the future. 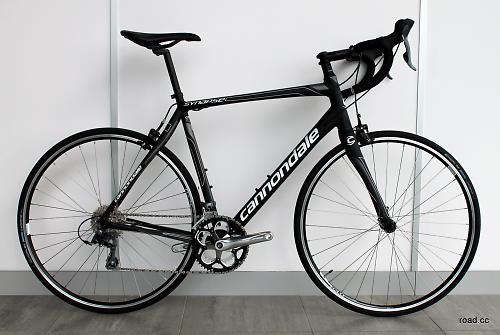 This is the Synapse Claris which swaps the carbon frame for one made form 6061 aluminium, with a carbon bladed fork. It costs £649.99 and is available in five sizes. One neat feature of the Synapse is the LED that Cannondale developed. It sits around the steerer tube and takes the place of a handful of spacers. It's compact, light and a nice little addition for extra night-time visibility. If you've got a stack of spacers, it's surely preferable to have a compact light there instead, right? It'll be interesting to see if Cannondale develop some more products like this. A rear light similarly integrated into the frame would be interesting to see.